In May of 1999, Ian Stewart issued the article “A Puzzle for Pirates” in that month's edition of Scientific American (pp.98-99). This mathematical game then went on to become a worldwide hit, especially for puzzlers who like a good challenge. The rules of the pirate game are described below:

Five rational pirates have found 100 gold coins on an island and need to decide how to distribute them. They are a democratic bunch and they ask the fiercest pirate to propose a plan of distribution. Then, all of the living pirates (including the proposer) vote on whether to accept the distribution plan. If the majority (50% or more) accepts that proposal, then coins are dispersed and the game ends. Otherwise, the proposer is thrown overboard and killed, then the procedure is repeated with the next fiercest pirate until a proposal is accepted or only one pirate is left. If there is a tie vote, then the proposer (say, the fiercest pirate) has the casting vote.

At first glance, the proposer may offer the most favorable terms to all voters to pass the proposal, but this is not the case. The pirates are not only rational but also greedy and want to maximize their personal gain. Due to the game's rules and how the order of pirate fierceness is known to all in advance, these rational pirates prioritize surviving first, then maximizing gold coins for themselves. They would love to kill off as many pirates as possible to make more coins for themselves through future distribution proposals. This logic may become surprisingly complicated due to the changes in the numbers of pirates and coins.

Suppose N is the number of pirates, and G is the number of gold coins. We number the pirates in order from meekest to fiercest, the greater the number, the fiercer the pirate. So P1 is the least fierce pirate, and PN is the fiercest pirate. Due to there being too many branches from the beginning, we can think of the problem backward from the end, that is, starting from the game results to reverse the entire distribution process.

If there are three pirates (N=3), and all of them are aware of an inevitable positive result, then the fiercest pirate P3 is going to make a proposal pass to guarantee his own survival first, so he needs at least one vote from P1 or P2. Due to P2 having the possibility of getting G coins, so he can’t be bribed with gold coins; P1 knows he is going to get 0 coins if the game goes onto the next round, and P3 knows what P1 is thinking, so P3 can offer the least amount of coins, e.g., just 1 coin to buy the vote of P1, and P1 also would love to support P3 accordingly as he can get a better result: survival plus coins. So, the final proposal by P3 is P1=1, P2=0, P3=G-1, where G>1.

From the two trial calculations above, we can conclude the following decision-making patterns or rules for a player of the pirate game. The rules apply to all pirates and it is the rationality of a pirate, that is the pirate game recursive solving algorithm (click here to download the precompiled code). 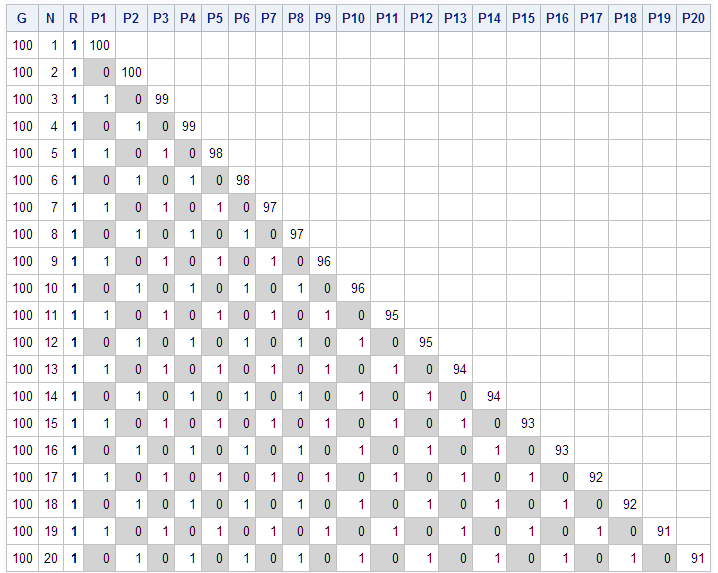 Will this pattern continue for any N pirate games with constant G gold coins? The answer is no because we have limited gold coins (G) to buy supporters. Anyway, it is true for N<= 2*G game, e.g., The P200 can take 1 coin and buy 99 supporters with another 99 coins, the detailed proposal plan for N=200 pirate game is show as below:

Interesting things happen while the number of pirates N exceed the 2*G. e.g., P201 and P202 pirates still can survive if he is taking no gold coins for himself and offering 1 gold coin each to 100 pirates with the same parity in the list ordered by fierceness. The detailed proposal for N=201, N=202 cases is show as below: 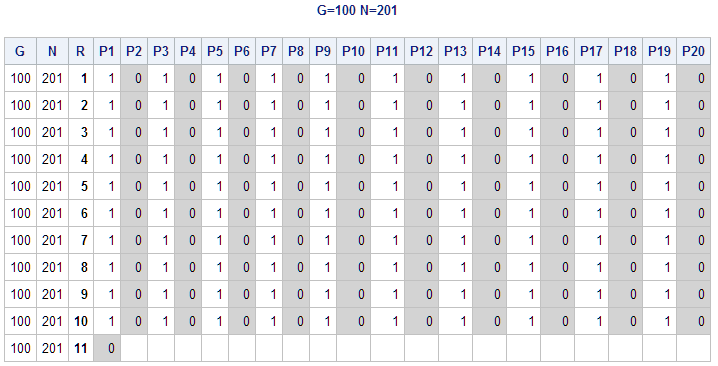 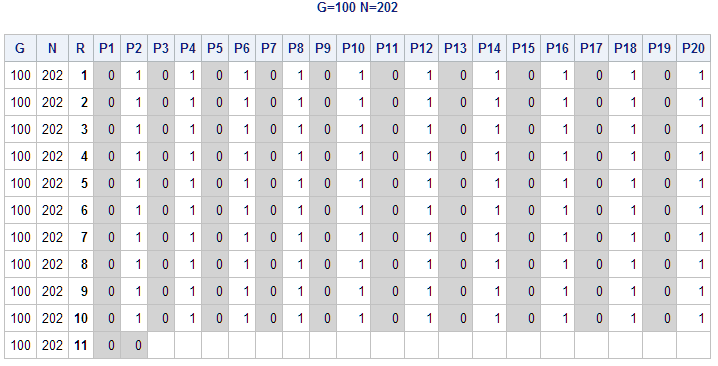 Unfortunately, P203 has no coins to buy supporters anymore in the pirate game (G=100, N=203), so P201 and P202 in this round would love to throw P203 overboard to earn more coins through future distribution proposals. In other words, P203 must die for this case (We use -1 to indicate death in detailed proposal). 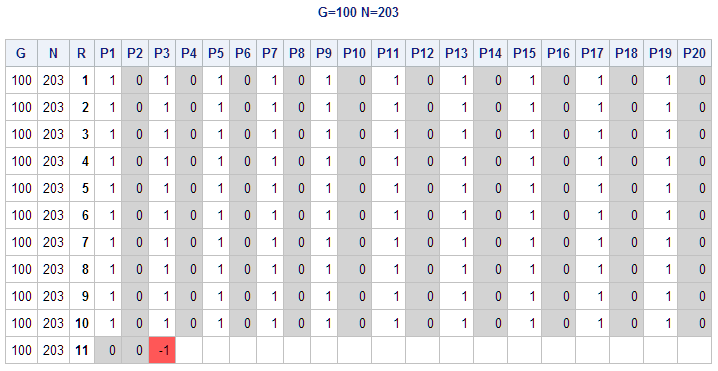 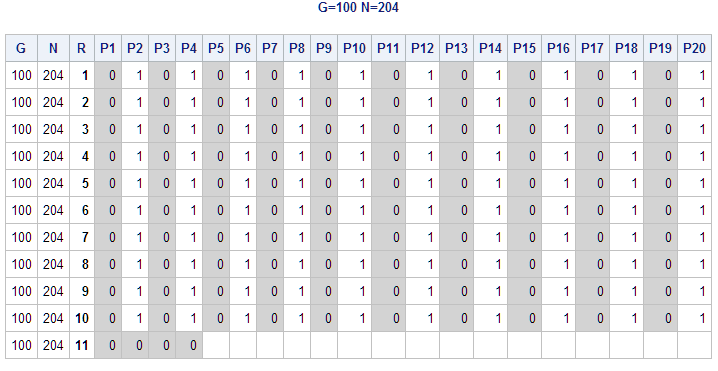 Accordingly, P205, P206 and P207 are all unlucky and doomed to die in their round, just like P203 in pirate game (G=100, N=203). The key reason is that they cannot get sufficient votes to make their proposals pass. The four rational pirates (P201 to P204) know they can survive and would love to throw these three pirates (P205 to P207) overboard to earn more coins through future distribution proposals. The detailed proposal for the game (G=100, N=207) is shown below: 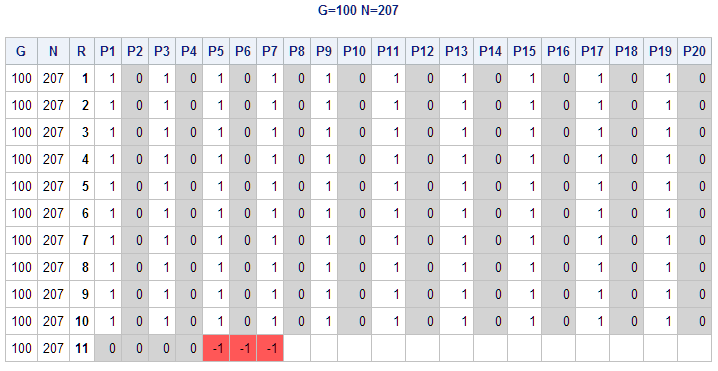 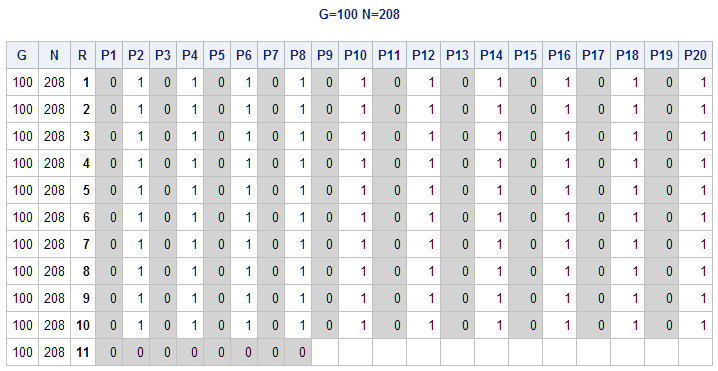 In general, suppose the number of the pirate I-th (I<= N) is PI in a pirate game (N, G), we have the following conclusion based on the recursive solving algorithm result:

In fact, there is no unique solution to distribute gold coins if a pirate already guarantees his survival. This means that the fiercest pirate has some freedom of selection when I>=2G+2, but the simplest solution is to select those pirates with the same parity by order of fierceness.

From the proposer’s perspective (I=N), if he attends a pirate game with different N, then his personal interest is different. For a game with a number of pirates that is less than or equal to 2*G, the proposer will always survive with coins. For games with greater than 2*G pirates, most proposers can’t survive except whose number minus 2*G happens to be an integer power of 2. We can visualize the solution for pirate game(N=500, G=100) with SAS as seen below.

Accordingly, we also can calculate the possibility of survival of a pirate game with N pirates (N<=500) and constant G=100. The survival curve below indicates how likely a pirate (proposer) is to survive if he participates in a game with N pirates. As expected, the curve is a non-linear line.

For the least fierce pirate, he has no chance to distribute gold coins, but he has most chances to vote on proposals. In other words, he can survive longer than other pirates. For the fiercest pirate, the survival rate appears as a cliff-like fall at some points for the pirate whose number PI is greater than 2*G. The survival curve below indicates how likely a pirate PI is to survive if he participates in a game with N pirates (N<=500). 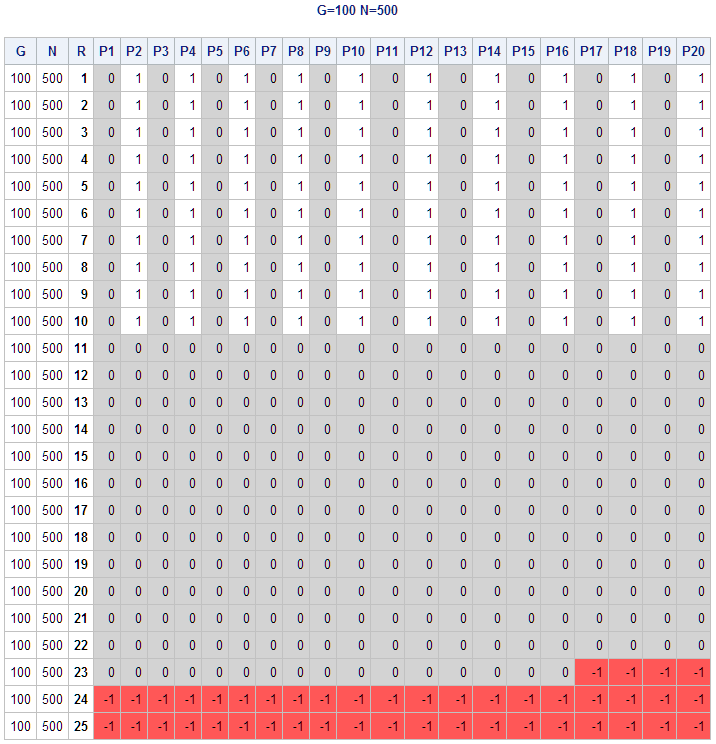 We have figured out how to solve the pirate game with a recursive solving algorithm in SAS, and how to analyze and visualize the law behind the complex logic of the pirate game. Now the next time you join a pirate game, you will know your destiny ahead of time and reap the benefits while avoiding getting thrown overboard.

Yinliang Wu
Director of Research and Development at SAS

Yinliang Wu has over 21 years software industry management and business experience. He focuses on data science, parallel computing and visualization such as AI, BI, big data, data visualization, quantitative trading, web crawler etc. Currently he is working on SAS Visual Analytics product family research and development. He received his Master of Science degree from Peking University. He is author of the book SAS 技术内幕 (2018) [Insider of SAS Technology: From Programmer to Data Scientist] and co-author of the book "数据分析实用教程 (2021) [Data Analysis Practical Tutorial] ".