When we wrote the sixth edition of The Little SAS Book: A Primer, one of our goals was to write it for all SAS programmers regardless of which interface they use for coding: SAS Studio, SAS Enterprise Guide, the SAS windowing environment, or batch. This is harder than it sounds. There are differences in how the SAS interfaces work. One of those differences is the default setting for the system option VALIDVARNAME=.

To set the rules for naming variables for your current SAS session, use the OPTIONS statement

where value is V7 for traditional SAS naming rules, or ANY for the more liberal rules.

If you are using ANY rules, then you must use the name literal form for variable names that contain spaces or special characters in your programs. Simply enclose the name in quotation marks followed by the letter N:

The following tab-delimited file contains information about camping equipment: the item name, country of origin, the online price, and the store price. Notice that some of the column headings contain spaces or special characters.

The following program sets VALIDVARNAME= equal to ANY and reads the file using PROC IMPORT. Then in a DATA step, it uses the name literal form of the variable names to subset the data using an IF statement, and it creates a new variable that is the difference between the store and online prices.

Here is the data set CAMPEQUIPMENT_ANY. Notice the special characters and spaces in the variable names.

If you decide that you don’t want to use name literals, then you could choose to rename the variables so that the names conform to V7 rules. You can do this using a RENAME data set option.

Here is the data set CAMPEQUIPMENT_V7.

If you are reading data files (either through PROC IMPORT or the XLSX LIBNAME engine) that contain headings that include spaces or special characters, we recommend that you always specify the VALIDVARNAME= rules that you want to use in an OPTIONS statement. That way your programs will always run no matter what the default value is for VALIDVARNAME= on your system.

To find more helpful programming tips or to get started with SAS, check out our latest edition, The Little SAS Book: A Primer, Sixth Edition. 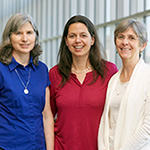 Lora D. Delwiche (right) enjoys teaching people about SAS software and likes solving challenging problems using SAS. She has spent most of her career at the University of California, Davis, using SAS in support of teaching and research. She is also a one of the authors of Exercises and Projects for The Little SAS Book Fifth Edition.