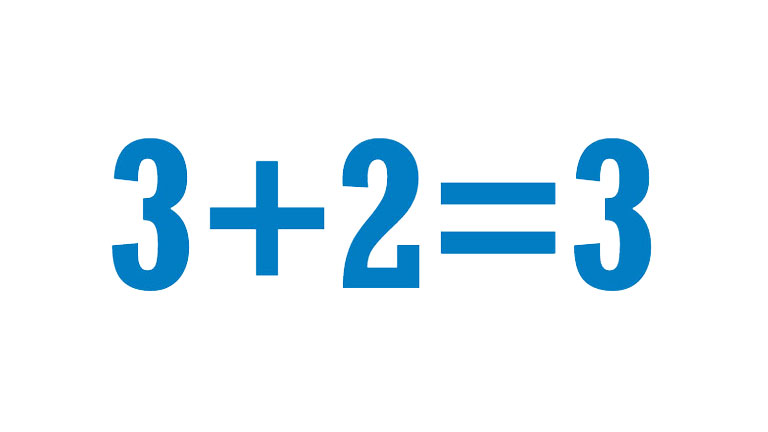 As earth completes its routine annual circle around the sun and a new (and hopefully better) year kicks in, it is a perfect occasion to reflect on the idiosyncrasy of time.

While it is customary to think that 3+2=5, it is only true in sequential world. In parallel world, however, 3+2=3. Think about it: if you have two SAS programs one of which runs 3 hours, and the second one runs 2 hours, their total duration will be 5 hours if you run them one after another sequentially, but it will take only 3 hours if you run them simultaneously, in parallel.

I am sure you remember those “filling up a swimming pool” math problems from elementary school. They clearly and convincingly demonstrate that two pipes will fill up a swimming pool faster than one. That’s the power of running water in parallel.

The same principle of parallel processing (or parallel computing) is applicable to SAS programs (or non-SAS programs) by running their different independent pieces in separate SAS sessions at the same time (in parallel).  Divide and conquer.

You might be surprised at how easily this can be done, and at the same time how powerful it is. Let’s take a look.

SAS/CONNECT® is one of the oldest SAS products that was developed to enable SAS programs to run in multi-machine client/server environments. In its original incarnation SAS/CONNECT allowed only synchronous execution of the SAS remote sessions. That is when a remote session was started, the client session was suspended until processing by the server session had completed. That was client/server, but not parallel processing.

Starting with SAS 8 released in 1999, Multi-Process Connect (MP CONNECT) parallel processing functionality was added to SAS/CONNECT enabling you to execute multiple SAS sessions asynchronously. When a remote SAS session kicks off asynchronously, a portion of your SAS program is sent to the server session for execution and control is immediately returned to the client session. The client session can continue with its own processing or spawn one or more additional asynchronous remote server sessions.

Running programs in parallel on a single machine

Sometimes, what comes across as new is just well forgotten old. They used to be Central Processing Units (CPU), but now they are called just processors. Nowadays, practically every single computer is a “multi-machine” (or to be precise “multi-processor”) device. Even your laptop. Just open Task Manager (Ctrl-Alt-Delete), click on the Performance tab and you will see how many physical processors (or cores) and logical processors your laptop has: 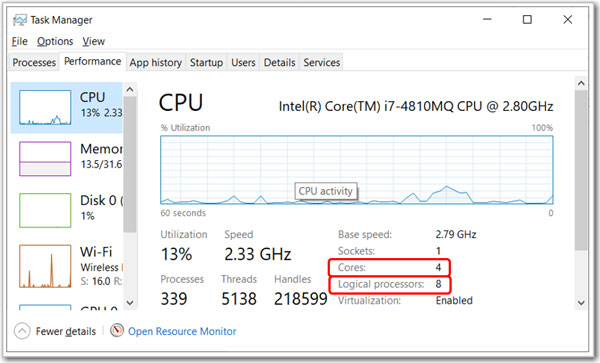 That means that this laptop can run eight independent SAS processes (sessions) at the same time. All you need to do is to say nicely “Dear Mr. & Mrs. SAS/CONNECT, my SAS program consists of several independent pieces. Would you please run each piece in its own SAS session, and run them all at the same time?” And believe me, SAS/CONNECT does not care how many logical processors you have, whether your logical processors are far away from each other “remote machines” or they are situated in a single laptop or even in a single chip.

Here is how you communicate your request to SAS/CONNECT in SAS language.

Suppose you have a SAS code that consists of several pieces – DATA or PROC steps that are independent of each other, i.e. they do not require to be run in a specific sequence. For example, each of the two pieces generates its own data set.

Then we can create these two data sets in two separate “remote” SAS sessions that run in parallel. Here is how you do this.  (For illustration purposes, I just create two dummy data sets.)

In this code, the key elements are:

SASCMD= System Option - specifies the command that starts a server session on a multiprocessor computer.

SIGNON Statement - initiates a connection between a client session and a server session.

RSUBMIT Statement - marks the beginning of a block of statements that a client session submits to a server session for execution.

ENDRSUBMIT statement - marks the end of a block of statements that a client session submits to a server session for execution.

WAITFOR Statement - causes the client session to wait for the completion of one or more tasks (asynchronous RSUBMIT statements) that are in progress.

SIGNOFF Statement - ends the connection between a client session and a server session.

Threaded processing, on the other hand, is achieved by developing special algorithms and implementing executable codes that run on multiple processors (threads) within the same SAS session. Many SAS PROCs are multi-threaded by design (e.g. SORT, SQL, MEANS/SUMMARY, TABULATE, REG, GLM, and others) and every single one can run multi-threaded.

Simplistically, total duration of several independent processes running in parallel is equal to the duration of the longest of these processes.

In the code example above, we have two single-threaded SAS DATA steps and we can take full advantage of the SAS MP CONNECT. This code spawns off two “remote” SAS sessions, each running its own DATA step. On my PC, SAS log showed that DATA_A step took 3 minutes to complete, while DATA_B step took 2 minutes to complete. However, total duration of these two tasks was 3 minutes, which is equal to the duration of the longest of the two processes.  That is how we get 3 + 2 = 3.

It might not look too remarkable when we cut run time from 5 minutes to 3 minutes, but it becomes more significant for longer processes. For example, cutting run time from 5 hours to 3 hours saves 2 whole hours. That time saving can be made even more impressive if we can split our SAS code into more than two parallel processes.

Interestingly, when running in parallel, each step DATA_A and DATA_B takes slightly longer than when they run in a single session. If we run these two data steps in a single session sequentially, DATA_A step takes 2:45 minutes, and DATA_B step takes 1:45 minutes. That is because even though parallel SAS processes run on separate processors, they still share (and compete for) some other common computer resources such as RAM and hard drive.

If our parallel SAS processes each run multithreaded PROC, we may not yield meaningful time saving as each such PROC will employ multiple processors at the same time.

On the other hand, you can still accelerate your program performance by running it in parallel even on a single processor. That is because your spawned “remote” sessions might require different resources at different times: while one session using the processor, the other one might be doing input/output (I/O) operations thus eliminating the processor idle time.

For deeper discussion and understanding, you may consider delving into Amdahl's law, which provides theoretical background and estimation of potential time saving achievable by parallel computing on multiple processors.

Passing information to and from “remote” SAS sessions

Besides passing pieces of SAS code from client sessions to server sessions, MP CONNECT allows you to pass some other SAS objects.

Let’s say you have two data libraries defined in your client session:

In order to make these data libraries available in the remote session all you need is to add inheritlib= option to the rsubmit statement:

And here is an example of how to pass the value of a client-session-defined macro variable _start_dt to a remote session as macro variable rem_start_dt:

Similarly, %SYSRPUT Statement assigns a value from the server session to a macro variable in the client session. The general syntax of the %sysrput statement is one of the following:

(macro-variable specifies the name of a macro variable in the client session.)

(/LIKE=<‘character-string’ >specifies a subset of macro variables whose names match a user-specified character sequence, or pattern.)

Here is a code example that passes two macro variables, rem_start and rem_year from the remote session and outputs them to the SAS log in the client session: