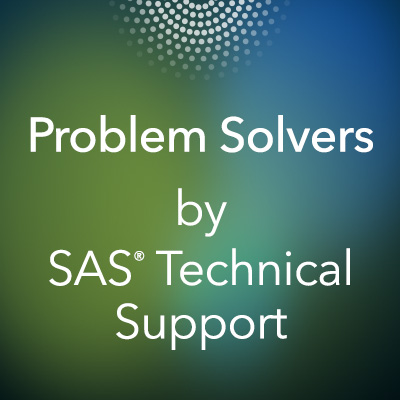 When you execute code on the SAS® Cloud Analytic Services (CAS) server, one way you can improve performance is by partitioning a table. A partitioned table enables the data to load faster when that data needs to be grouped by the common values of a variable.

BY-group processing enables you to group your data by unique variable values. This processing is used, for example, in tasks like merging data sets by a common variable and producing reports that contain data that is grouped by the value of a classification variable. You also use BY-group processing when you execute code in CAS. A key difference in creating BY-groups in SAS versus in CAS is that SAS requires a SORT procedure to sort the data by the specified BY variable in order to create the BY groups.

This step is not required in CAS. When you perform BY-group processing on a CAS table, an implicit sorting action takes place, and each BY-group is distributed to the available threads. This implicit sort process takes place each time that the table is accessed and the BY-groups are requested.

Partitioning a CAS table permanently stores the table such that the values of the BY variable are grouped. Using a partitioned CAS table enables you to skip the implicit sort process each time the table is used, which can greatly improve performance.

You create a partitioned CAS table by using the partition CAS action. The following example shows how to partition the CARS table (created from the SASHELP.CARS data set) by the MAKE variable.

①  The CASLIB statement creates SAS librefs that point to all existing caslibs. CASUSER, which is used in the subsequent DATA step, is one of the librefs that are created by this statement.

②  The DATA step creates the CARS CAS table in the CASUSER caslib.

③  The partition action in the CAS procedure is part of the TABLE action set.

④  The casout= parameter contains the caslib= parameter, which points to the caslib where the partitioned CAS table named CARS2 will be stored.

You can confirm that the table has been partitioned by submitting the following CAS procedure with the tabledetails action.

The following output is displayed in the resulting log. The KEY column shows the variable the table has been partitioned by. 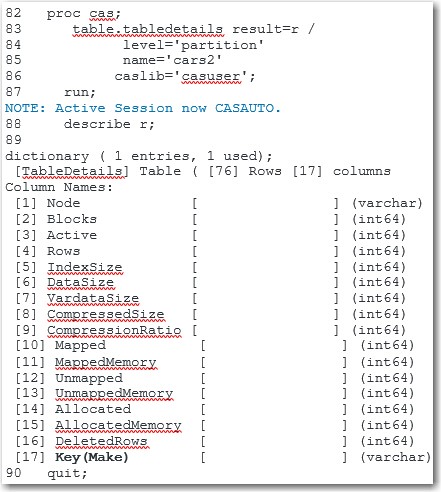 As mentioned earlier, the purpose of partitioning a table is to improve performance. The following example uses two CAS tables that consist of an ID variable with 10 possible values and 10 character variables. Each table contains 5,000,000 rows. This example illustrates how much performance improvement you can gain by partitioning the tables. In this case, the ID variable merges two tables.

First, you create the tables by submitting the following DATA steps:

The DATA steps above show how to merge non-partitioned tables. In the log output shown below, you can see that the total, real time (highlighted) took almost 45 seconds to run. 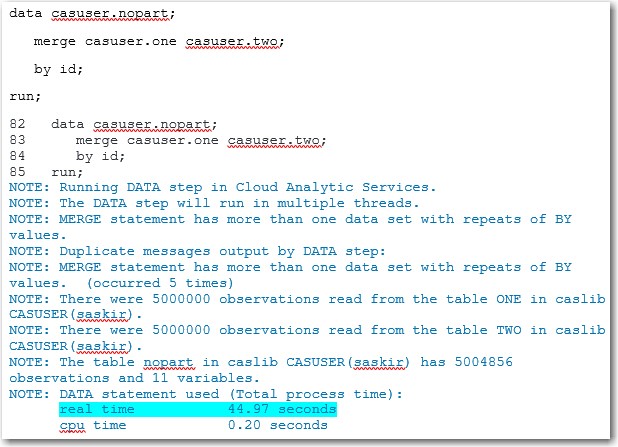 The next example runs the same DATA step code, but it uses partitioned tables. The first step is to partition the tables, as shown below:

To merge the two tables and to product the log, submit the following code. (The real time is highlighted in the log.)

The output for this code is show below:

This time, the DATA Step took only 25.43 seconds to execute. That is a 43% improvement in execution time!

If your analysis requires you to use the same table multiple times to perform BY-group processing, then I strongly recommend that you partition the table. As the last example shows, partitioning your table can greatly improve performance!

Kevin Russell is a Technical Support Analyst in the Foundation SAS group in Technical Support. He has been a SAS user since 1994. His main area of expertise is the macro language, but provides general support for the DATA step and Base procedures. He has written multiple papers and presented them at various SAS conferences and user events.