After you start to use arrays, it is easy to see their usefulness and power. In this post, I will share tips and techniques that can increase the functionality of arrays and enable you to use programming shortcuts to take maximum advantage of them.

These tips will also streamline your programming, even if you are not using arrays. I'll provide complete code examples for each tip at the end of each section, as well as explain how the code is constructed along the way.

Use arrays to zoom out for greater perspective

Now, you want the values of the EVENT variable to become the names of the variables in the output data set, as shown here:

How do you know which variables to create if your data set is more complicated than shown above?

You can use the SQL procedure to create a macro variable (called EVENTLIST here) that contains all the unique values of EVENT. You then can use that macro variable in your array definition statement:

When you run the following statement, the resulting log shows that &EVENTLIST contains the unique values for the EVENT variable:

You can then use the EVENTLIST macro variable in an ARRAY statement to define the variables that you are including:

Use CALL MISSING to set all variables

However, you do not want the values for the previous ID to contaminate the next ID, so you need to reset the array variables to missing with each new ID. You can use a DO loop that uses FIRST.variable and LAST.variable processing in order to set each value to missing:

DO loops were commonly used in the past to initialize all elements of an array to missing. And it still needs to be used if you want to set all the elements to a non-missing value, such as 0. However, you can replace this code with one function call. The CALL MISSING routine sets all the variables in the array to missing in one statement:

Compare via OF variable-list syntax

The OF variable-list syntax is another helpful feature. You can use OF with a list of variables or an array reference.

To return the name of each variable in the array, you can use the VNAME function:

Other variable information functions can also be used in the same way to extract information about each of the variables in the array.

In this example, a value that is read from each observation can match only one variable name in the array, so you want to stop when you achieve that instead of continuing the DO loop.

To stop the DO loop at that point, use the LEAVE statement, which stops processing the current loop and resumes with the next statement in the DATA step.

Combine above methods with DATA Step

Putting all these methods together, here is a short DATA Step that will reshape the original data set into the output data set that you want:

Want to use even more shortcuts with arrays? Here, your original data has a numeric variable called RATING, which is included in every observation: 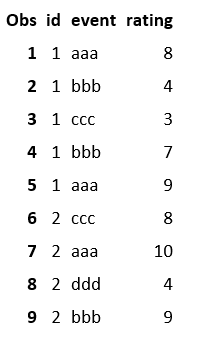 You want to find the lowest rating and corresponding event and also the highest rating and corresponding event for each ID. You can start off by defining the arrays and reading each observation in the same way as in the previous example. In this case, you have two arrays, so you need to read both the EVENTS and RATINGS variables into their own arrays:

After you have read all the observations for an ID, how do you find the lowest rating? Of course, you can use a DO loop to loop through the array and check each value to see whether it is the lowest and keep track of which one it is. Or you can use the OF array syntax with the MIN and MAX functions:

This code returns the value of the lowest and highest ratings for ID 1, which are 3 and 9, respectively. But you also want to know which events were rated the highest and lowest for this ID. First, you have to determine which elements in the RATINGS_ array had the lowest and highest values. You know the values, but you do not yet know which specific elements match those values. Use the WHICHN function to determine the indexes for those values in the array. Keep in mind that if there is more than one element that matches the value using the WHICHN function, the function returns only the index of the first element in the array to match:

For ID 1, these functions return 3 and 5, respectively. Now you can use the indexes to retrieve the corresponding elements in the EVENTS_ array:

Putting all these methods together, here is the complete code for returning the desired results:

Here is the resulting output:

You can expand the functionality and capability of arrays by incorporating other features of the SAS programming language in your DATA Step code. I hope these tips and links improve your array use and lead you to explore even more ways to work with arrays. The resource below complements this post and provides additional tips and tricks.

Grace Whiteis is a Technical Support Analyst in the Foundation SAS group. She provides support for SAS Studio. She also provides support for macro, DATA step and Base procedures, with an emphasis on hash, arrays and merge. Grace has SAS Certifications in Base Programming for SAS 9, Advanced Programming for SAS 9, and SAS 9 Platform Administration.