As data volumes continue to surge (with no signs of slowing down), the cost to handle all that data can have a very real impact on IT budgets.

But for all the talk of the growing value of data, the cost side of the equation is often overlooked. After all, it not only takes a lot of drives to hold all that data, it requires significant computing resources to handle it. The costs quickly add up, forcing IT leaders to make tough choices about where to make their IT investments.

This is as true for SAS users as it is for any other IT organization. We work closely with our customers and know that the cost of our analytics software is only part of the budget puzzle – total cost of ownership (TCO) casts a long shadow over their budget decisions. So we were as curious as they were when Intel released its Intel® OptaneTM DC Persistent Memory.

What is persistent memory?

Of course, as a longtime Intel collaborator, we worked closely together to optimize SAS software for this innovation. But how would it work in real-life applications outside of the labs? Would the Intel Optane DC Persistent Memory - SAS® Viya® combination have a real impact, or would it just represent yet another incremental improvement – nice, but not enough to change the IT investment-performance equation?

There was only one way to find out, of course: Test it.

So that’s what we did. In collaboration with Intel, we ran SAS Viya 3.4 on Intel Optane DC Persistent Memory. 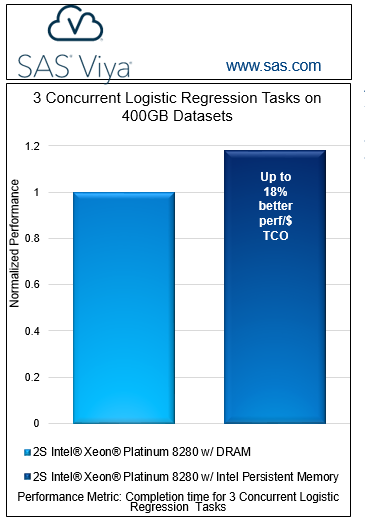 We didn’t hold back, either – we ran multiple instances of a large model containing 400 gigabytes of data, concurrently. All these jobs finished in a matter of minutes. Just as important, the costs of achieving performance in a persistent memory environment with SAS Viya, when compared to DRAM and SAS Viya, make their own compelling case.

But performance may not even be the most interesting part of this story – not when you compare it to the cost benefits of running in this environment. In short, compared with DRAM – equal capacity memory, equal CPU, and so on – using Intel Optane DC Persistent Memory leads to a reduction in costs of 20 percent or more. That’s a tangible, meaningful impact for any IT budget, allowing CIOs to invest more heavily to address other pressing needs. By contrast, system costs increase dramatically with higher DRAM capacity.

Plus, it may be possible in the future to use the memory module in different modes – an opportunity we’re currently testing in non-volatile random-access memory (NVRAM) mode with the goal of allowing applications to take advantage of this benefit.

How does this combination of persistent memory tools and SAS Viya contribute to faster speeds and lower costs? The massive scale of data typically handled by SAS customers can be handled by fewer servers, because each can now have a much greater memory capacity. This equation can translate into a significant reduction in the total cost of ownership.

There are a lot of factors, many of which are unique to your organization, that go into reducing the total cost of ownership – so it goes without saying that your mileage may vary. Regardless, this is a conversation your organization needs to be having right now, if it hasn’t already. We’re happy to answer your questions about running SAS Viya together with Intel Optane DC Persistent Memory. 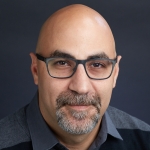 As vice president of product strategy, Shadi Shahin is responsible for leading Product Management, Price and Offering Management, as well as the Enterprise Excellence Center teams. His background as an IT professional began at IBM more than 25 years ago eventually leading Wolters Kluwer, and most recently, RedHat. Along the way, Shahin’s teams pushed the boundaries within data, analytics, and next-generation technologies. This included creative integrations of SAS into an open architecture ecosystems. His guiding principle is to infuse both a customer and practitioner perspective into a pragmatic and collaborative SAS roadmap.