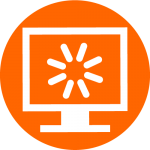 Let’s say that you are administering a SAS 9.4 environment that is working just fine. You’ve checked that your full backups are indeed happening and you’ve even tried restoring from one of your backups. You are prepared for anything, right? Well, I’d like to propose a scenario to you. You probably have users responsible for creating reports, maybe even very important reports. What if something happened to one of these reports? Perhaps the user wants to revert to an earlier version. Perhaps the report was accidentally deleted or even corrupted, what then? Restoring a full backup in this situation might help this one user but would likely inconvenience most other users. With a little more preparation, you could “magically” restore a single report if needed. Here’s what you need to do: create a backup of only these critical reports using the promotion tools.

The promotion tools include:

Note: Starting with the third maintenance of SAS 9.4, you can use the -disableX11 option to run the batch import and batch export tools on UNIX without setting the DISPLAY variable.

You may be thinking that using an interactive wizard is not really the answer you are looking for and you may be right. The batch tools are a great solution if you want to schedule the exporting of some objects on a regular basis. If you are unfamiliar with the promotion tools, I would suggest you start with the interactive wizards. You will find that the log produced by the wizard includes the equivalent command line you would use. It’s a nice way to explore how to invoke the batch tools.

How to invoke the Export SAS Package Wizard:

1.  Right-click on a folder or object in the SAS Folders tree and select Export SAS Package. 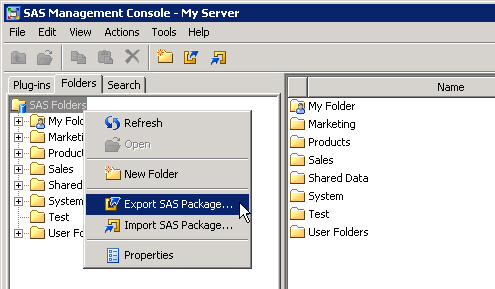 2.  Enter the location and name of the package file to be created and set options as appropriate. 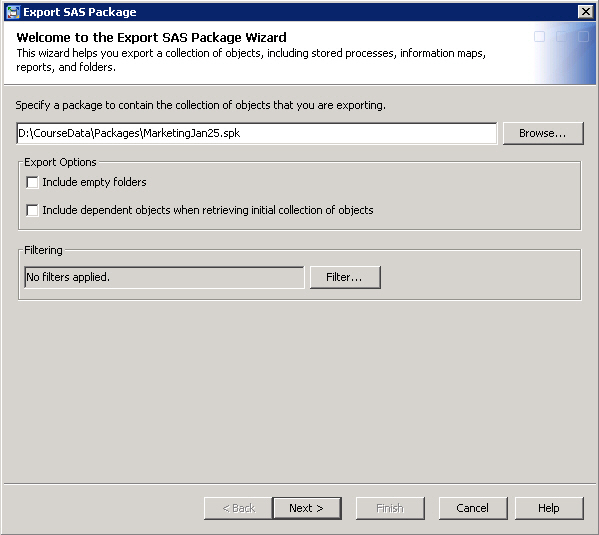 Filtering offers some very interesting ways of selecting objects including: 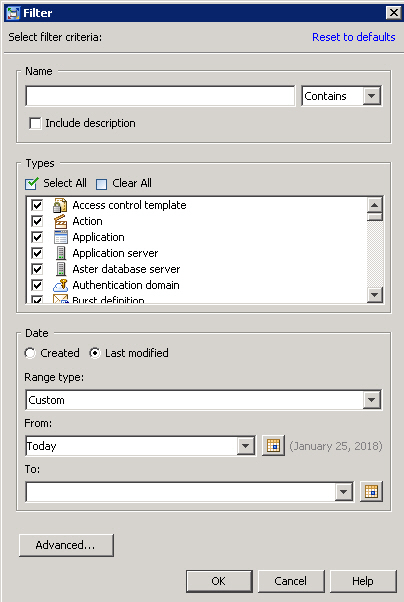 3.  Select the objects to export. If you started the process with a folder, you will be presented with the folder and all of its contents selected by default. You can deselect specific objects as you like.

In this example, we only want the Marketing folder and its contents. Deselect the other folders. You want to be careful to not create a package file that is too big. 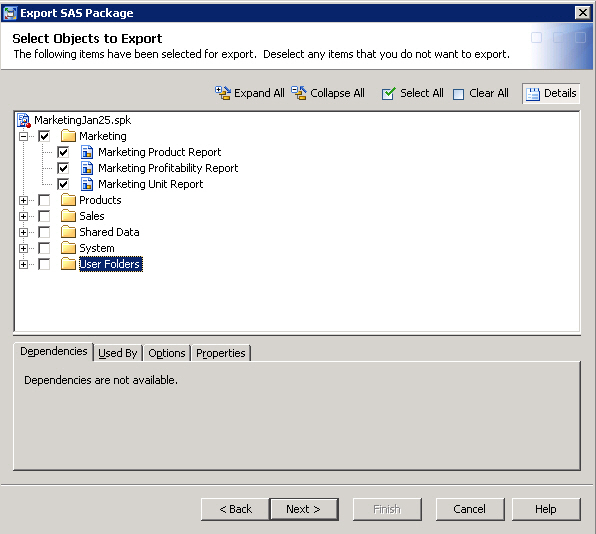 You can click on individual objects and explore what dependencies the object has, what other metadata objects use the current object, options and properties for the object.

In this example, the Marketing Unit Report is dependent on the MEGACORP table whose metadata is found in the /Shared Data/LASR Data folder. When you import this report, you will need to associate the report with the same or similar table in order for the report to be fully functional. 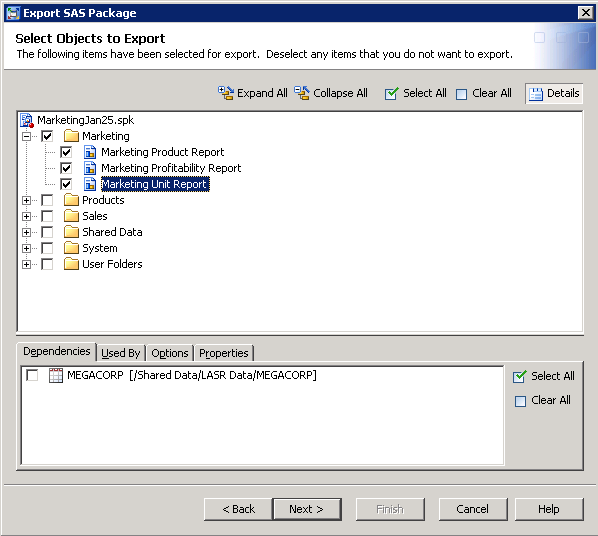 Bonus things you get by default in the export package include:

4.  Review the description of the package that is going to be created and its content. 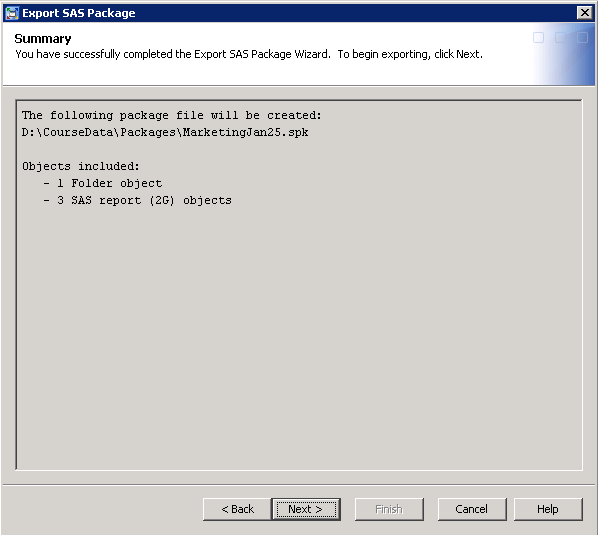 5.  When the export process is complete (hopefully without errors) review the log. 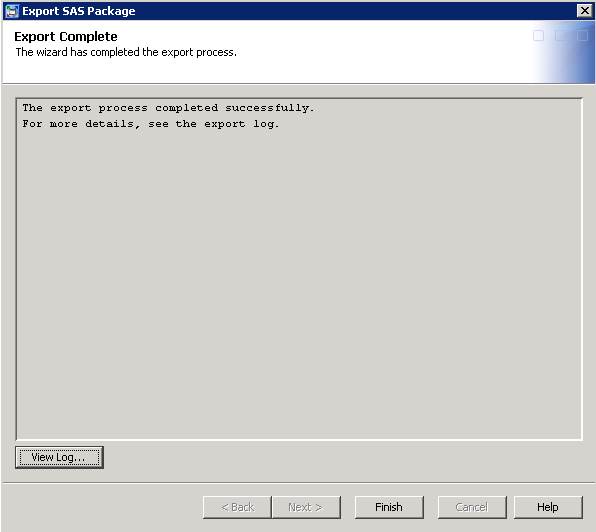 At the top of the log, you can see the location of the log file in case you want to refer to it later.

If you scroll to the end of the log, you’ll find the command line to invoke the batch export tool to create the same package. 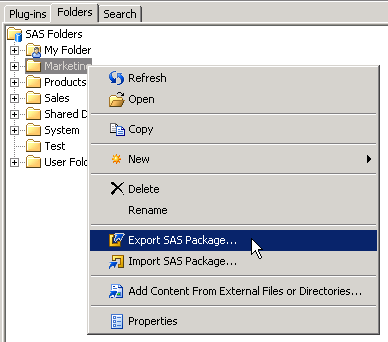 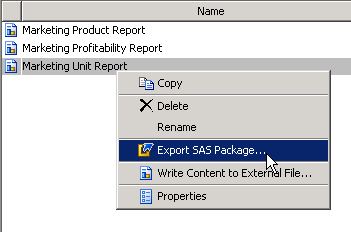 Importing to the Rescue

Let’s talk about what happens if and when you actually need to import some or all of the objects in a package file.
Let’s take a look at what we would need to do to replace an accidentally deleted report, Marketing Unit Report.

How to invoke the Import SAS Package Wizard: 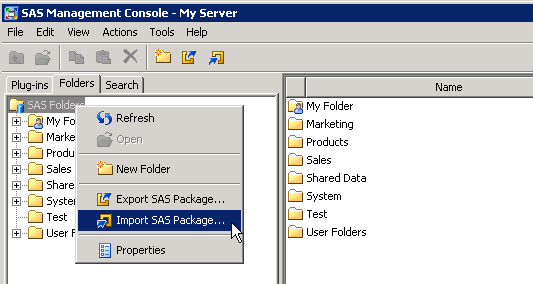 6.  If needed, use the Browse functionality to locate the correct package file. 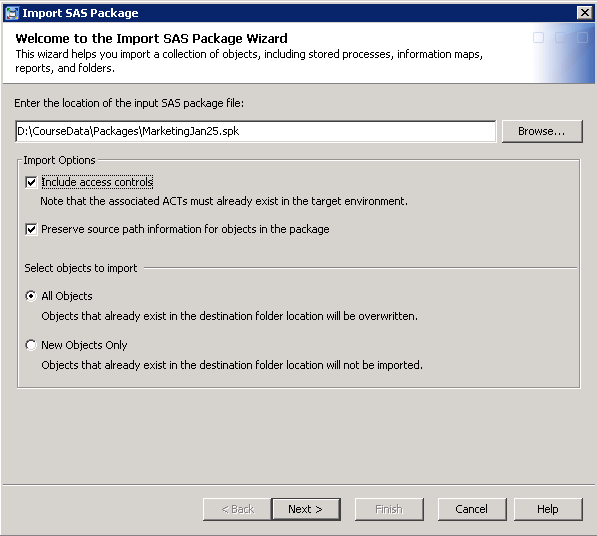 By default, Include access controls is not selected. This option will import permission settings directly applied to the objects in the package. It will not import any permissions if there were only inherited permissions on the object in the source environment.

Since we are bringing the report back into the folder it originally came from, it makes sense to also include direct permissions, if there were any.

If you do not check the Include access controls box and there are in face some direct permissions on objects being imported, you will get this warning later in the wizard:

If you’re not sure whether to select to import All objects or New objects only, you can always start with all objects. You can use the Back buttons in the wizard to go back to previous prompts and change selections, at least before you kick off the actual import process. 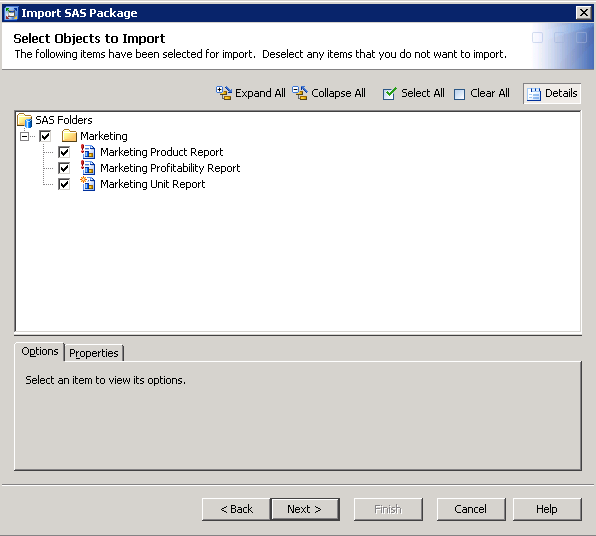 You’ll want to make the appropriate selections here. If you want all of the contents of the package to be written to the Marketing folder, overwriting the first two reports and adding the Marketing Unit Report, leave all objects selected. If one of the reports had become corrupted, you could use this method to overwrite the current copy with the version stored in the package file.

If you just want to replace the missing Marketing Unit Report, make sure only that object is selected as below: 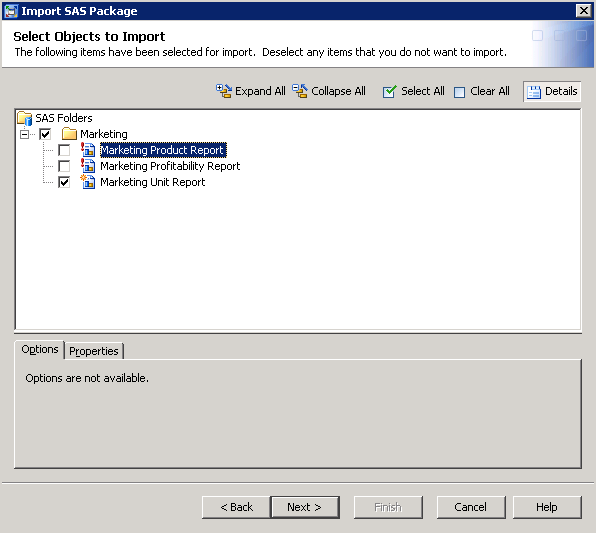 By default, objects are imported into the same folder structure they were in when the export package was created.

8.  Part of the import process is to establish associations between the objects you are importing and metadata not included in the package. You are first presented with a list of the metadata values you will need to select. 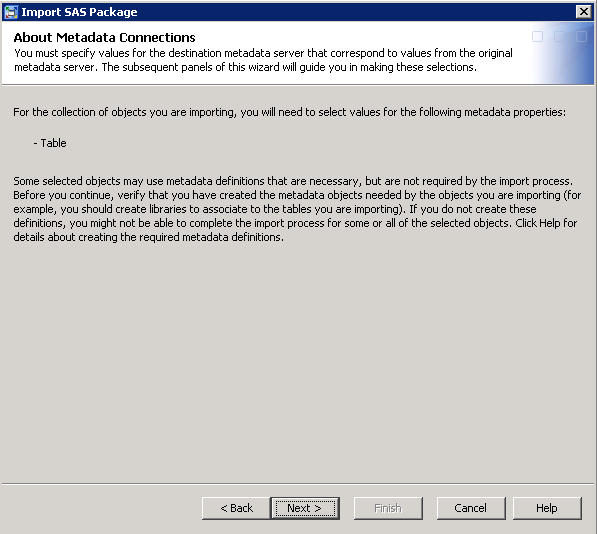 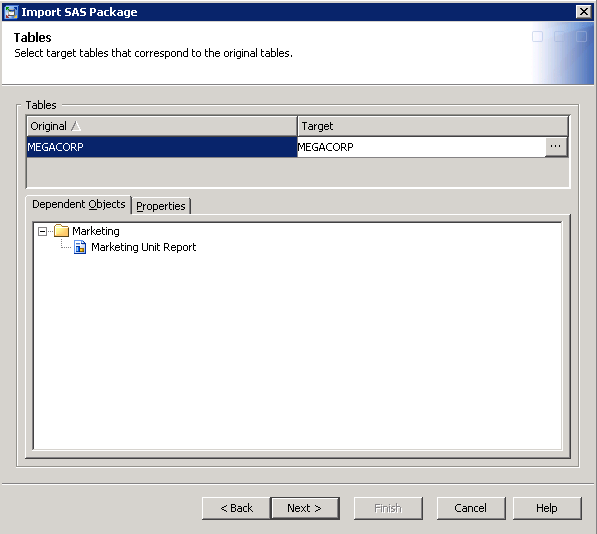 In our example, we definitely want the report to use the same table it used originally.
If we were moving objects to a new folder or a new environment, you might want to associate the report with a different table.

If you use the batch import tool, changing these associations would be done in a substitution properties file. 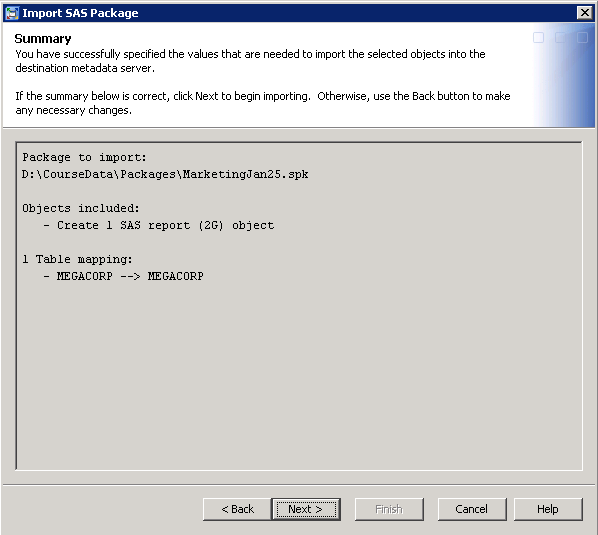 11.  Hopefully, the process completes without errors and you can review the log.

12.  Finish things off by testing the content you imported. In this case, we would log in to SAS Visual Analytics and view the Marketing Unit Report. 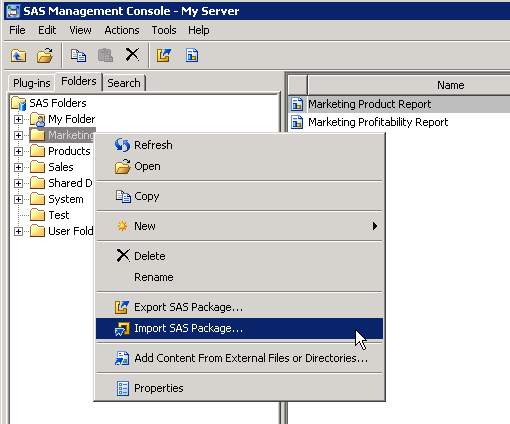 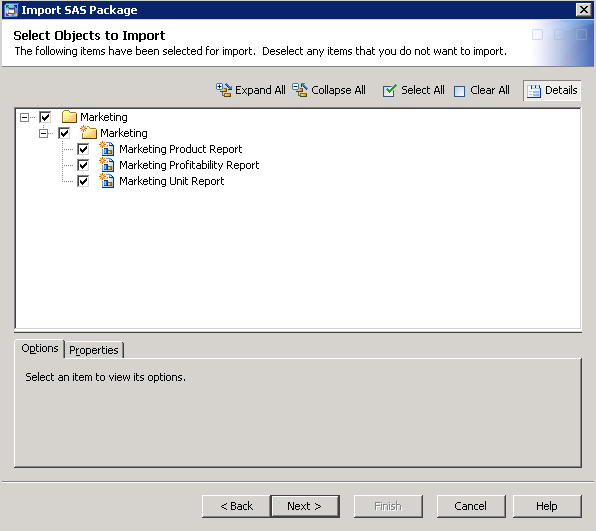 Review the documentation on both the wizards and batch tools in the SAS Intelligence Platform System Administration Guide. 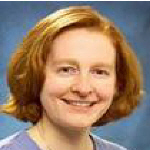 Christine Vitron is a Principal Technical Training Consultant in the Global Enablement and Learning (GEL) Team within SAS R&D's Global Technical Enablement Division. She has been at SAS since 1998, serving different roles in Education, Technical Support, and Consulting. Her primary focus is installing and administering SAS software.