The SAS/GRAPH® Annotate Facility is often viewed as a mysterious programming abyss that many SAS users do not wish to dive into, in part because of some not-so-obvious pitfalls that they might experience when using it. I view annotation as a frequently misunderstood and needlessly feared but powerful tool that enables me to draw anything—literally, anything—on my graphs.

I will not attempt to delve into a tutorial of the Annotate facility due to lack of time and space. But, I will point out a few of the more common pitfalls that I see with customers’ Annotate data sets and offer suggestions for how to avoid them.

An Annotate data set contains a set of variables that tells the Annotate facility what to draw and where to draw it. It has no intelligence of its own, and simply does what you tell it to do. One of the most common issues that I see is annotation that is not drawn in the expected location on a graph. For example, an annotated 45-degree line that you expect to be drawn inside the axis area might be drawn outside the axis area. The following code defines an Annotate data set that should draw a line from the lower left corner of the axis area (0,0 percent) to the upper right corner of the axis area (100,100 percent):

The following annotate errors are written to the SAS log when I run this code:

Here is the resulting graph: 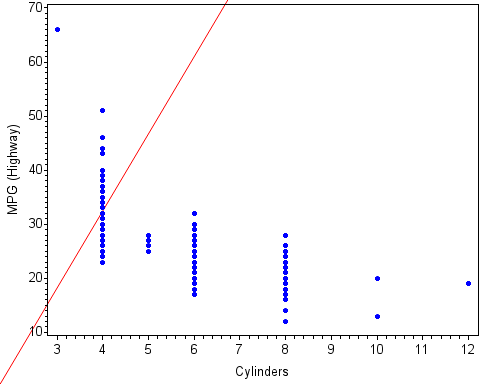 The annotated line is drawn outside the axis area. But why? I defined my X and Y coordinates for the MOVE and DRAW functions correctly, did I not?

Here is the graph containing the correct line: 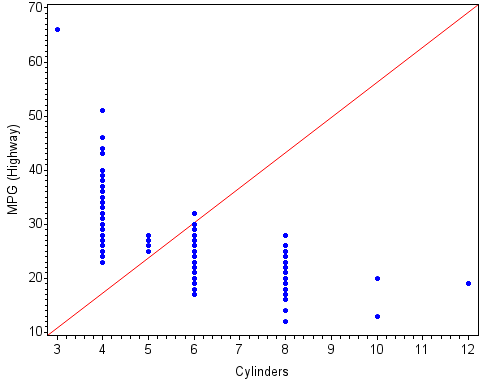 The goal of the following program is to create two graphs using a BY statement in which the annotation is specific to each graph. The Annotate data set draws the maximum MPG_Highway value at the maximum point for each X value.

Here are the resulting graphs:

There are two issues here. First, there should be only one maximum value displayed for each X value. There are duplicate values of the annotated text on each graph. Second, the following messages are written to the SAS log:

When I run this program, the following graph is produced, excluding the annotated symbols: 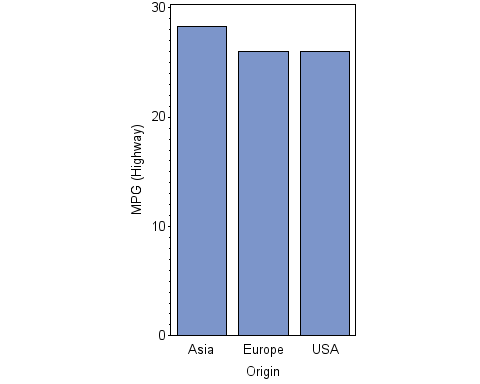 The following annotate error messages are written to the SAS log:

These messages tell me that multiple response values (Y coordinates) in the Annotate data set lie outside the range of the Y axis. The procedure does not automatically extend the Y-axis range to accommodate the annotation, so I need to do this by including the ORDER= option in the AXIS1 statement:

The correct graph is now generated: 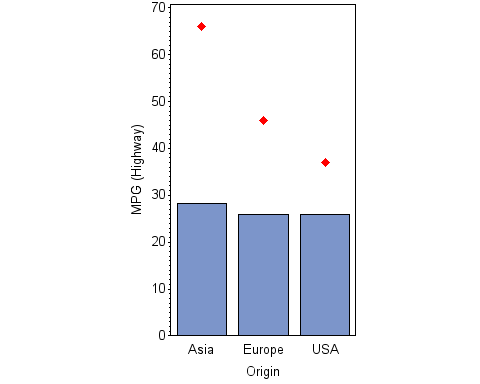 Annotation is a useful tool that enables you to draw features on a graph that the graphics procedure might not have the capability to draw. Using an Annotate data set is easier once you understand what the SAS log messages are telling you and can take steps to avoid common issues. Don’t be afraid to dive in!


Sue Morrison is a Senior Technical Support Analyst at SAS Institute Inc., in Cary, NC, where she supports SAS/GRAPH procedures and ODS Graphics. She has been a SAS user since 1982 and in SAS Technical Support for more than 20 years. Sue is a SAS® Certified Base Programmer for SAS® 9.