Reading an external file that contains delimiters (commas, tabs, or other characters such as a pipe character or an exclamation point) is easy when you use the IMPORT procedure. It's easy in that variable names are on row 1, the data starts on row 2, and the first 20 rows are a good sample of your data. Unfortunately, most delimited files are not created with those restrictions in mind.  So how do you read files that do not follow those restrictions?

Note: PROC IMPORT is available only for use in the Microsoft Windows, UNIX, or Linux operating environments.

Peter Styliadis, a trainer with SAS, shows how to use PROC IMPORT to read CSV data in this tutorial.

In this scenario, I use PROC IMPORT to read a comma-delimited file that has variable names on row 1 and data starting on row 2, as shown below:

When I submit this code, the following message appears in my SAS® log:

In this situation, how do you prevent the Invalid Data message in the SAS log?

By default, SAS scans the first 20 rows to determine variable attributes (type and length) when it reads a comma-, tab-, or otherwise-delimited file.  Beginning in SAS® 9.1, a new statement (GUESSINGROWS=) is available in PROC IMPORT that enables you to tell SAS how many rows you want it to scan in order to determine variable attributes. In SAS 9.1 and SAS® 9.2, the GUESSINGROWS= value can range from 1 to 32767.  Beginning in SAS® 9.3, the GUESSINGROWS= value can range from 1 to 2147483647.  Keep in mind that the more rows you scan, the longer it takes for the PROC IMPORT to run.

The following program illustrates the use of the GUESSINGROWS= statement in PROC IMPORT:

The example above includes the statement GUESSINGROWS=100, which instructs SAS to scan the first 100 rows of the external file for variable attributes. You might need to increase the GUESSINGROWS= value to something greater than 100 to obtain the results that you want.

In this scenario, my delimited file has the variable names on row 4 and the data starts on row 5. When you use PROC IMPORT, you can specify the record number at which SAS should begin reading.  Although you can specify which record to start with in PROC IMPORT, you cannot extract the variable names from any other row except the first row of an external file that is comma-, tab-, or an otherwise-delimited.

Then how do you program PROC IMPORT so that it begins reading from a specified row?

Scenario 3: Read a "section" of data from the middle of the file

In this scenario, I want to read only records 6–15 (inclusive) in the delimited file. So the question here is how can you set PROC IMPORT to read just a section of a delimited file?

To do that, you need to use the OBS= option before you execute PROC IMPORT and use the DATAROW= option within PROC IMPORT.

The following example reads the middle ten rows of a CSV file, starting at row 6:

Notice that I reset the OBS= option to MAX after the IMPORT procedure to ensure that any code that I run after the procedure processes all observations.

In this scenario, I again use PROC IMPORT to read my external file. However, I receive more observations in my SAS data set than there are data rows in my delimited file. The external file looks fine when it is opened with Microsoft Excel. However, when I use Microsoft Windows Notepad or TextPad to view some records, my data spans multiple rows for values that are enclosed in quotation marks.  Here is a snapshot of what the file looks like in both Microsoft Excel and TextPad, respectively: 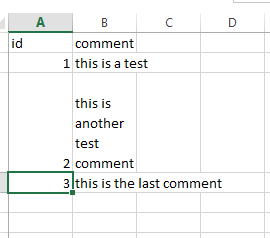 The question for this scenario is how can I use PROC IMPORT to read this data so that the observations in my SAS data set match the number of rows in my delimited file?

In this case, the external file contains embedded carriage return (CR) and line feed (LF) characters in the middle of the data value within a quoted string. The CRLF is an end-of-record marker, so the remaining text in the string becomes the next record. Here are the results from reading the CSV file that is illustrated in the Excel and TextPad files that are shown earlier: 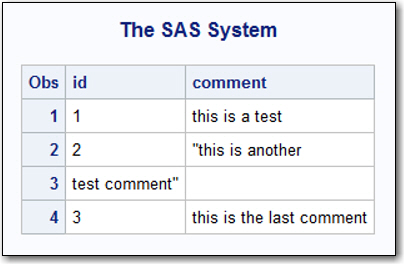 That behavior is why you receive more observations than you expect.  Anytime SAS encounters a CRLF, SAS considers that a new record regardless of where it is found.

A sample program that removes a CRLF character (as long as it is part of a quoted text string) is available in SAS Note 26065, "Remove carriage return and line feed characters within quoted strings."

After you run the code (from the Full Code tab) in SAS Note 26065 to pre-process the external file and remove the erroneous CR/LF characters, you should be able to use PROC IMPORT to read the external file with no problems.

For more information about PROC IMPORT, see "Chapter 35, The IMPORT Procedure" in the Base SAS® 9.4 Procedures Guide, Seventh Edition. 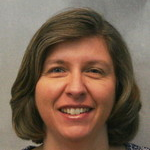