If you are a SAS administrator managing an environment on UNIX or z/OS, you must use the sas.servers script on a regular basis. As you know, one of its uses is to display the current status of all servers. Is the output accurate? Absolutely. Is it easy to read? Relatively. Is it visually attractive? Not so much.

Human beings are visual creatures. Conventional wisdom says that a picture speaks a thousand words. However, I am not using images to improve the output, but another powerful tool: color. According to this Xerox paper, color captures attention and enhances productivity. It can improve search time, reduce errors, and increase comprehension. As a result, this blog post provides the steps for applying color and an easy-to-read layout to make the sas.servers script look cute and even fun!

Before we begin, it is important to give you some recommendations:

As a matter of fact, I consider steps 1 and 3 as optional. This script is only used by the SAS platform to start/stop/restart or check the status of the servers. Moreover, if you follow all steps carefully, you can apply these changes safely in a Production environment. In contrast, step 2 is relevant; it is always a good practice to backup essential files before modifying them. In case you need to rollback, you can restore them easily and quickly.

The About the sas.servers Script section from the SAS 9.4 Intelligence Platform: System Administration Guide provides a caution message: "You should not directly update the sas.servers script." In our case, the type of customization we are about to perform requires a manual update. Don't worry, your script is in good hands.

Furthermore, if you ever need to update the sas.servers script because you want to add/remove a server, you have to run the generate_boot_scripts.sh script to regenerate this file. After doing so, you can lose all the changes made in this post. Keep this in mind, so you can backup the current files before attempting this task.

Let's jump into the details. First of all, let's define the new layout of the desired output. Grab your favorite text editor. Go to your /SASCONFIG/Lev1/ directory and run a regular status command as the sas user. Assuming you followed the preliminary steps and depending on the products installed and the number of SASServers deployed, you should get a similar output:

Copy that output, except the first line, and paste it into your text editor. Here you can modify the output according to your taste. What I did was to identify the longest line, which is SAS Information Retrieval Studio Server, then I added four spaces to the right and substituted the legend is NOT up for [DOWN]. Likewise, I applied these changes to the rest of the servers, removed the instance number, and kept them all aligned:

I chose the pair [ UP ]/[DOWN] to reflect the status because I wanted the look and feel from CentOS 6 boot process. If you are/were a CentOS 6 user, you can remember that the services display the legends: [ OK ] or [FAILED] when booting. You are free to use other alternatives such as ACTIVE/INACTIVE or perhaps RUNNING/STOPPED with or without brackets. Now that the layout is finished, let's move on to the color department.

All You Need Is Color

The fun finally arrived. Let's integrate the layout into our three scripts and add the main ingredient: color!

Again, I am assuming at this stage that you already backed up the files: sas.servers, sas.servers.mid, and sas.servers.pre. Next, open the sas.servers file with your vi editor and add this code anywhere at the top, below the block of comments:

If these escape codes don’t work in your environment, then you can use the tput command as follows:

Considering that the sas.servers script does not contain all servers, you have to add the same code to sas.servers.mid and sas.servers.pre files.

Now that we have defined the three variables in all the necessary files, let's use them. I'll show you how to apply them to a couple of servers, and then you can replicate it to the rest. The first one is the SAS Metadata Server. Open the sas.servers script again and find these lines:

Since I have a single Metadata Server instance, the only meaningful variables are SASMETA1_IS_UP and SASMETA1_IS_DOWN. Delete their values, copy the correct string from your text editor, and paste it in both variables. Fix them accordingly:

The final touch is to give color to our script. Use the GREEN and RED variables for the UP/DOWN statuses. It is important to include the NC variable at the end to remove all attributes:

The process is the same for all the servers defined in the sas.servers script. For the other two scripts it is a little different, but still quite easy. I am going to use the SAS Web Infrastructure Data Server as the second example. Open the sas.servers.pre script and look for the server_status() function. Pay attention to these lines:

A subtle difference from the previous example is the echo command. In the sas.servers script, there is a logmsg() function that uses the echo -e command behind the scenes. In this case, we have to explicitly add the -e option to enable the interpretation of backslash escapes. Let's also integrate the color and layout:

At this point, with the above examples, you should have a solid idea about the required changes to accomplish our goal. Now it is your turn to apply them to the rest of the servers.

If you followed this article in detail and performed the steps in all the required servers, your output should resemble mine: 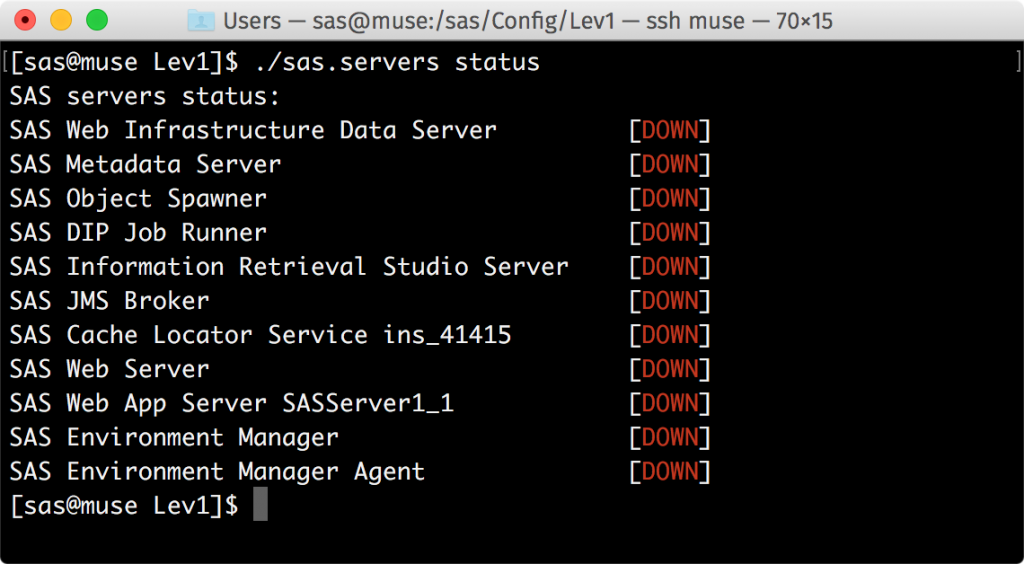 Get the green light by running the start command: 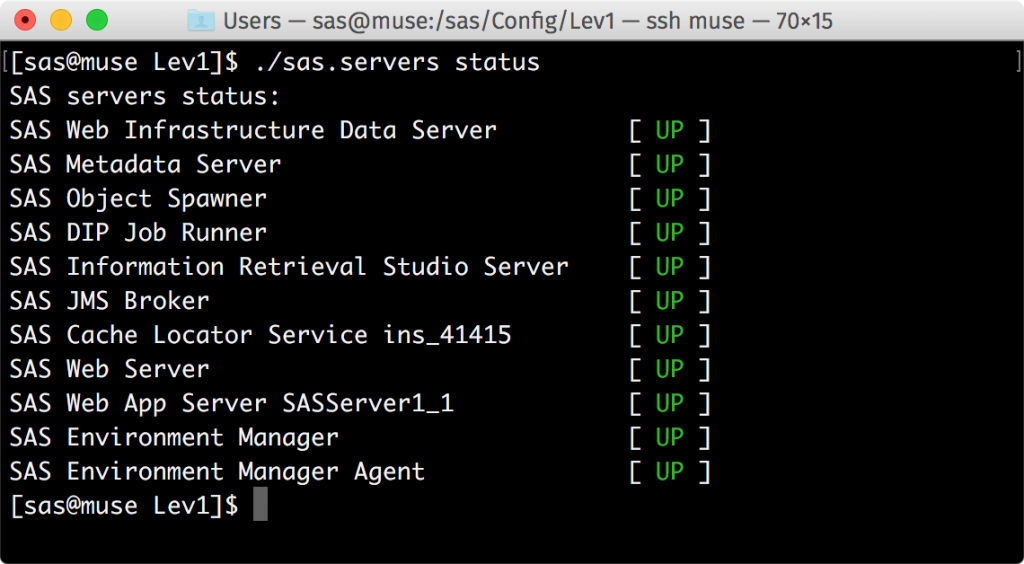 I am a visual person with a curious mind. One of the things I like is to customize the tools I use the most, so I decided to make the sas.servers script output a little more attractive to my eyes. I hope you liked the result. If you are still not sure whether to implement this idea or not, let's suppose there are some problems with a couple of servers in your environment and they stop running. Which output would you rather look at? Which one is easier to spot an issue? Let me know your thoughts in the comments below, or even better you can share your creative outputs! 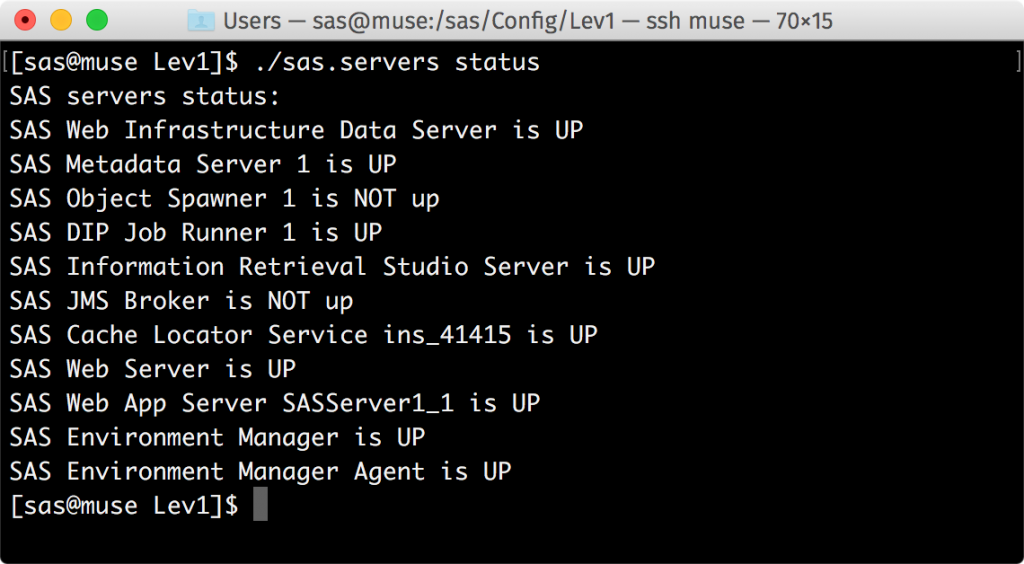 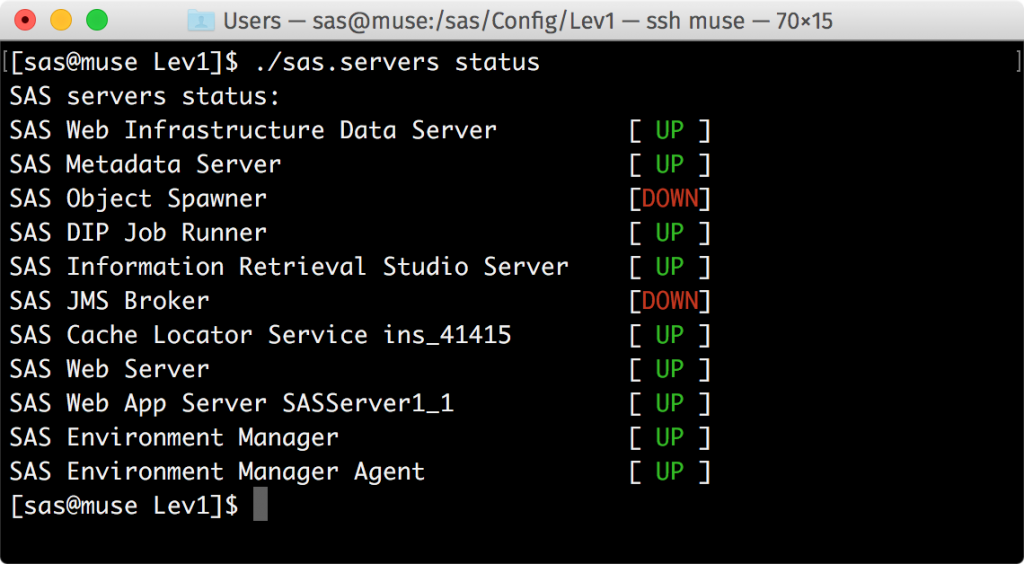 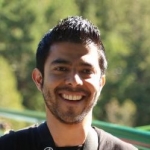 Roberto Meléndez is a Technical Support Engineer in SAS Mexico. He has worked in the industry for ten years, including five at SAS, where he has helped customers solve critical technical problems with SAS software from all over Latin America. Roberto is ITIL® certified and holds five SAS certifications. In his spare time, he enjoys listening to podcasts, discovering great new music, or planning his next trip, while tasting good coffee. You can follow him on Twitter @soypapabeto.