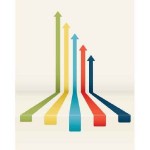 I recently received a call from a colleague that is using parallel processing in a grid environment; he lamented that SAS Enterprise Guide did not show in the work library any of the tables that were successfully created in his project.

The issue was very clear in my mind, but I was not able to find any simple description or picture to show him: so why not put it all down in a blog post so everyone can benefit?

Parallel processing can speed up your projects by an incredible factor, especially when programs consist of subtasks that are independent units of work and can be distributed across a grid and executed in parallel. But when these parallel execution environments are not kept in sync, it can also introduce unforeseen problems.

This specific issue of “disappearing” temporary tables can happen using different client interfaces, because it does not depend upon using a certain software, but rather on the business logic that is implemented. Let’s look at two practical examples.

We want to run an analysis – here a simple proc print – on two independent subsets of the same table. We decide to use two parallel grid sessions to partition the data and then we run the analysis in the parent session.  The code we submit in SAS Studio could be similar to the following:

After submitting the code by pressing F3 or clicking Run, we do not get the expected RESULT window and the LOG window shows some errors: 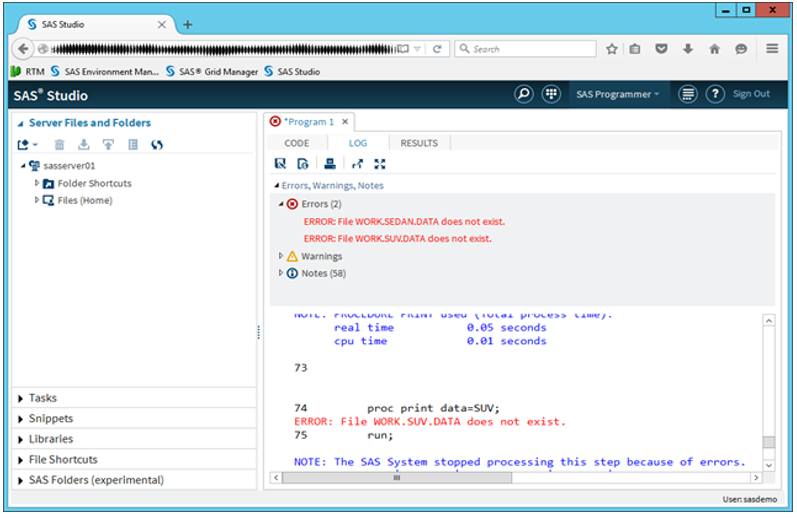 Suppose we have a project similar to the following. 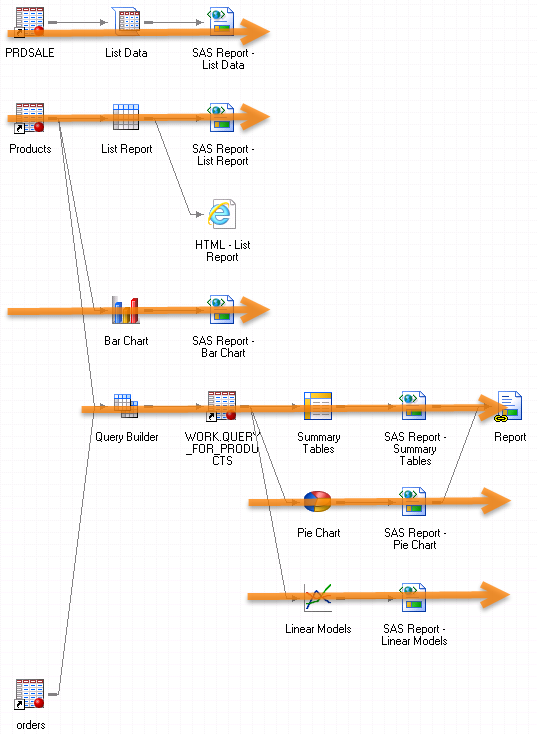 Many items can be created independently of others. The orange arrows illustrate the potential tasks which can be executed in parallel.

This property enables SAS Enterprise Guide to create one or more additional workspace server connections so that parallel process flow paths can be run in parallel.

Note: Despite the description, when used in a grid environment the additional workspace server sessions do not always execute on the same server. The grid master server decides where these sessions start.

After we select Run, Run Process Flow to submit the code, SAS Enterprise Guide submits the tasks in parallel respecting the required dependencies.  Unfortunately, some tasks fail and red X’s appear over the top right corner of the task icons. In the log summary we may find the following:

ERROR: File WORK.QUERY_FOR_PRODUCTS.DATA does not exist.

The WORK library is the temporary library that is automatically defined by SAS at the beginning of each SAS session or job. The WORK  library stores temporary SAS files that are written by a data step or a procedure and then read as input of subsequent steps. After enabling the parallel execution on the grid, tasks run in multiple SAS sessions, and each grid session has its own dedicated WORK library that is not shared with any other grid session, or with the parent work session which started it. 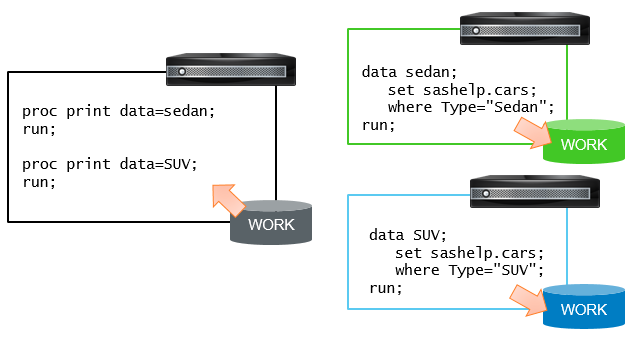 This is a quite common issue when dealing with multiple sessions – even without a grid. One simple solution is to avoid using the WORK library and any other non-shared resources. It is possible to assign a common library in many ways, such as in autoexec files or in metadata.
The issue is solved: 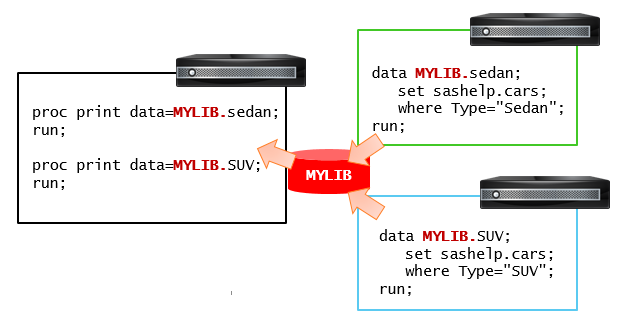 No shared resources, am I safe?

Well, maybe not. Coming back to the original issue presented at the opening of this post, sometimes we oversee what ‘shared’ means. I’ll show you with this very simple SAS Enterprise Guide project: it’s just a simple query that writes a result table in the WORK library. You can test it on your laptop, without any grid.

After running it, the FILTER_FOR_AIR table appears in the server’s pane: 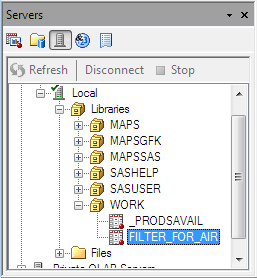 Now, let’s say we have to prepare for a more complex project and we follow again the steps to “Allow parallel execution on the same server. “ Just to be safe, we resubmit the project to test what happens. All seems unchanged, so we save everything and close SAS Enterprise Guide. Say I forgot to ask you to write down something about the results. We reopen the project and knowing the result table in the WORK library was temporary, we rerun the project to recreate it.

This time something is wrong.

The Output Data pane shows an error, and the Servers pane does not list the FILTER_FOR_AIR table anymore.
Even if we rerun the project, the table will not reappear.

The reason lies, again, in the realm of shared v.s. local libraries.

As soon as we enable “Allow parallel execution on the same server,” SAS Enterprise Guide starts at least one additional SAS session to process the code, even if there is nothing to parallelize. Results are saved only there, but SAS Enterprise Guide always tries to read them from the original, parent session. So we are again in the trap of local WORK libraries.

Why didn’t we uncover the issue the first time we ran the project? If you run your code, at least once, without the “Allow parallel execution on the same server” option, the results are saved in the parent session. And, they remain there even after enabling parallelization. As a result, we actually have two copies of the FILTER_FOR_AIR table!
As soon as we close SAS Enterprise Guide, both tables are deleted. So, on the next run, there is nothing in the parent session WORK library to send to SAS Enterprise Guide!

The solution? Same as before – only use shared libraries.

As you might have guessed, the answer is no. Libraries are not the only objects that should be shared across sessions. Every local setting – be it the value of an option, a macro, a format – has to be shared across all parallel sessions. Not difficult, but we have to remember to do it! 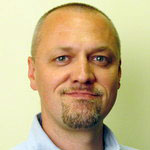