This post will list some all-purpose functions, tell how to determine when to use each type, and show you how to unmask, or unquote special characters.

%STR and %NRSTR mask the same characters except %NRSTR also masks & and % signs.

There are other execution-time functions, but these are the only two you really need. %BQUOTE and %SUPERQ mask the same characters except %SUPERQ does not attempt to resolve a macro variable reference or a macro invocation that occurs in the value of the specified macro variable.  %SUPERQ masks everything without any further resolution which makes it the best execution-time quoting function to use.

How to determine which type to use

Many times the hardest part of macro quoting is knowing whether you need a compile time function or an execution time function.  A simple technique that will help you easily choose the right one is to follow this motto:

If you can see the problem, it is a compile issue; otherwise, it is execution time.

These examples illustrate when a compile time function is needed.  You can see the potential problem in each of the examples:

There are a few special cases when you have an unmatched quotation mark or an unmatched parenthesis. These unmatched characters must be preceded with a percent sign when assigning a value at compile time.  For example:

These examples illustrate when an execution time function is needed.  You cannot see the potential problem in each of the examples:

Now that we have seen how to mask special characters, we also need a way to reverse the masking. This reversal is referred to as unquoting which means to restore the significance of symbols in an item that was previously masked by a macro quoting function.

Generally, once you use a macro quoting function on a value, the macro processor retains that masking on the value. There are three cases where the unquoting is done for you:

There are two cases where you might need to use the %UNQUOTE function to restore the original significance to a masked item: 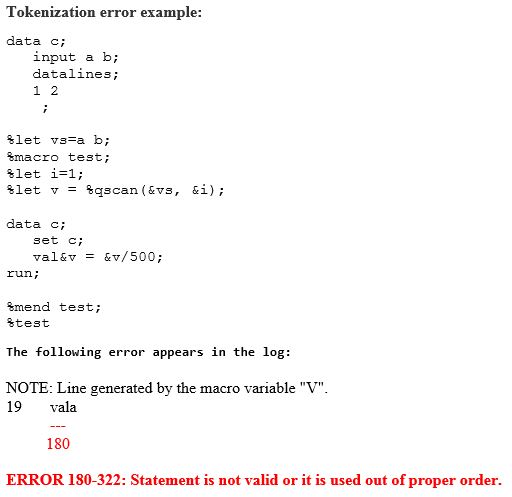 The code generated by the macro may look correct, but an error is generated because the masking placed on the value from the %QSCAN (to be discussed later) is causing the string to be tokenized incorrectly.  This can be corrected by using the %UNQUOTE function.
%unquote(val&v) = &v/500;

An easy way to determine if a quoting function has been used on a macro variable is to use the following statement to print out the values:
%PUT _USER_;

Here is a screenshot of a resulting SAS log. Notice the unusual spaces and characters. These represent the masking done by a quoting function.  Quoting functions mark the beginning and ending of the string as well as any special character.

There are a few other functions that mask a result that may contain special characters.  These functions all begin with Q:  %QSYSFUNC, %QSCAN, %QSUBSTR and %QUPCASE. Here are a few examples:

I hope this blog post has been helpful. If you have other SAS macro questions you’d like me to cover in future blogs, please comment below. 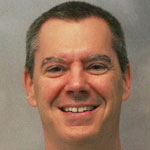 Russ Tyndall is a Senior Principal Technical Support Analyst in the Foundation SAS group in Technical Support. He has been a SAS user since 1993, and provides general support for the DATA step and Base procedures. He specializes in the SAS macro facility and has been the primary support for more than 18 years .