I think most people would agree that there's not much point in locking your front door if you're going to leave the keys in the lock. With a SAS platform metadata security implementation, it is just as important to ensure that the metadata access controls that you have carefully put in place cannot just as easily be unlocked. This blog post is going to focus on one aspect of this and that's securing Access Control Templates (ACTs).

Many SAS administrators use ACTs as the primary means of implementing SAS metadata security and for good reason. They are flexible, easily managed, reusable bundles of permission settings for users and groups. ACTs allow you to take common patterns of access controls and apply them consistently in multiple locations.

Why ACT security is often overlooked

Something that can be easily forgotten though, is the need to secure those ACTs so that they can only be modified by administrators. I find that new SAS administrators are often not aware of this fact. While, with a standard SAS installation, the predefined ACTs, such as Default ACT and SAS Administrator Settings are all appropriately secured, any new custom ACTs that they create can be modified by any SAS user with access to a workstation with SAS Management Console installed. 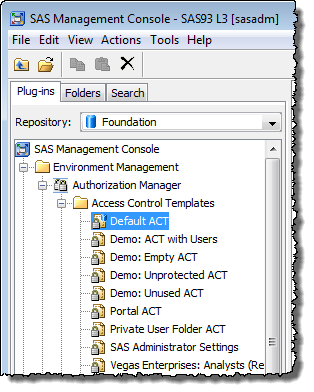 I sometimes demo this security gap with the following sample scenario:

This scenario is possible for two reasons: 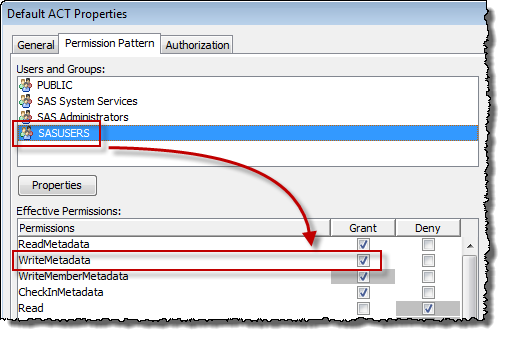 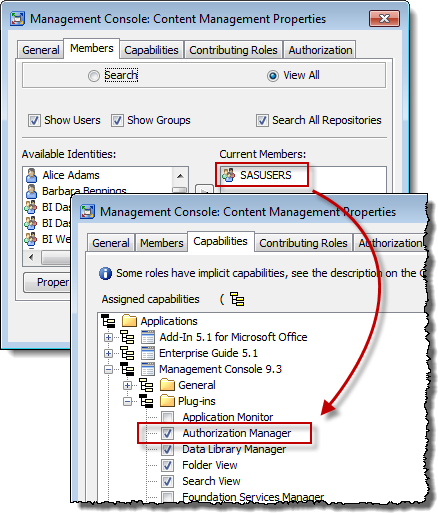 Address both entry points in your security plan

One might initially think that a potential way to prevent new ACTs inheriting an indirect grant of WriteMetadata for SASUSERS from the Default ACT is to remove the grant in Default ACT itself. However, you should avoid this step because granting default write permissions is necessary for any SAS user to be able to create new metadata, including metadata created just by using SAS applications. Instead of removing the grant, you must override that grant for each new ACT. While you could do this via explicit permissions, my recommendation is to use ACTs. 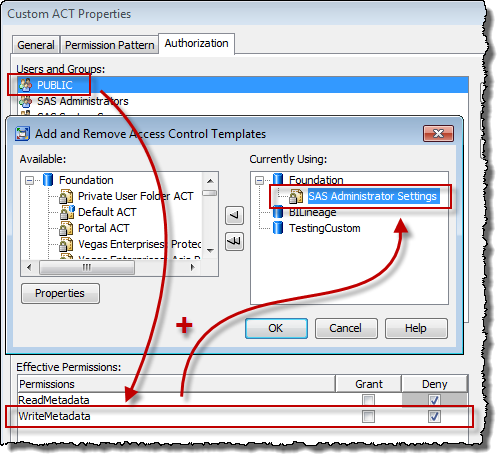 In a little twist of mind bending self-referencing you might also notice how the SAS Administrator Settings ACT is used to protect itself!

Personally, I prefer an alternative approach which involves a single step rather than two steps. My preference is based on the fact that with two steps it's easy to accidentally forget one of those steps!

In an excellent series of metadata security examples, the SAS Intelligence Platform: Security Administration Guide shows how to create a baseline Protect ACT. In a single step, you can apply that Protect ACT to any new ACTs (including itself) to accomplish the same end-results as above and ensure that those new ACTs can only be modified by unrestricted users and members of the SAS Administrators group. 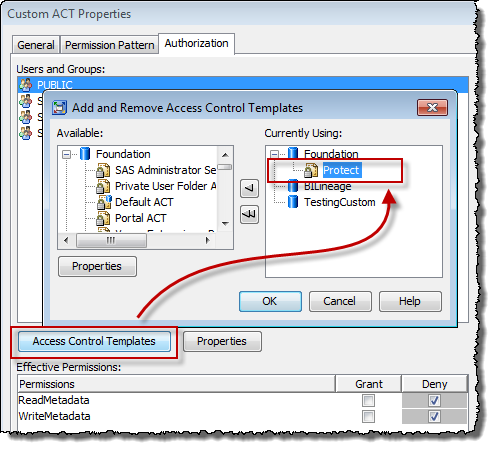 To help me remember to protect any new ACTs, I also use a security plug-in that my consultancy developed for reviewing ACTs. Its Protected indicator feature displays a warning icon for any ACTs that haven't had any access controls applied to them. With just a quick glance, I can see any ACTs I might have forgotten to protect. You can contact me directly for more information.

I hope this post has given you a few ideas on how to protect your carefully crafted metadata security implementation. In a later installment, I’ll discuss how to ensure that the SAS Management Console Authorization Manager plug-in is only available to appropriate users. Taking this additional step, in reducing the scope of access to the primary tool used for modifying ACTs, can help to protect any accidentally unprotected ACTs. Keep an eye out for this second installment on my platformadmin.com blog.

Please let me know if you have any questions or comments. I'd also be keen to hear from other administrators about how you go about protecting your protections. 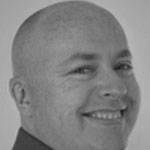 Paul Homes has been working with SAS software since 1989 and is a specialist in SAS platform administration, metadata security and metadata exploitation. He is also a co-founder of Metacoda (www.metacoda.com), a SAS Alliance Silver Member that specialises in the development of software add-ons that integrate with SAS software.