Waynette is exhausted after everything she did at SAS Global Forum, so she asked me to write a blog post for her so she can take some time to rest up.  ??? Hey, Waynette, like you think I’m a bundle of energy after chairing the event ???  I mean, I wrote an email yesterday but noticed just before sending that I forgot to include something very important that most good emails have – vowels!

I expected to be pleased with Chris Hemedinger’s Keynote at the Closing Session, BUT he managed to exceed my high expectations.  However, due to time limitations, he left off a lot of stuff.  There’s no way I can cover it all in this short space, but I can at least start to fill in the gaps …

Seriously, chairing SAS Global Forum 2012 was one of the most significant moments of my life.  I was reminded of the value of assembling a good team – the section chairs – and then standing back and staying out of their way while they do the job I asked them to do.  And they did it so well, by assembling a good team of speakers and session coordinators, then standing back and letting them do THEIR job!  The same is true for the crew from SAS who assisted behind the scenes to make sure all was going well.

Most importantly, it appears almost all of the approximately 3,400 attendees found SAS Global Forum 2012 to be a good use of their time – learning, networking, and even a little socializing in their free time.

BUT … all that rain that haunted us just before the conference has resulted in my lawn undertaking a growth spurt, so I am certainly glad that I now have a free weekend to deal with it!  I’d better get started … 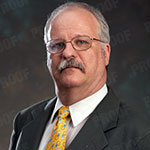 Andrew T. Kuligowski has been a SAS user for, well, for a long time. Currently the Manager of CRM Data Infrastructure at HSN in St. Petersburg, Florida, he has augmented his professional coding experiences by speaking at numerous SAS conferences and user group meetings across North America. Andrew was conference chair of SAS Global Forum 2012 in Orlando, and co-chair for SESUG’97 in Jacksonville and Tennessee SAS Users Day in Knoxville. In his spare time, Andrew volunteers at the Florida Aquarium in Tampa.