As you might have guessed from some of my previous blog posts, I'm an avid paddler. I like to paddle boats, and I like to try to go fast! And when I'm considering buying a new boat, it's only natural that I would analyze the data to make an informed decision. Follow along as I analyze the trade-offs between speed and stability while trying to decide whether to buy a new boat.

The boat I've been paddling lately is a surfski. A surfski is a long/skinny sit-on-top kayak. It goes pretty fast (because it's long and skinny), and it's suitable for paddling in the ocean (since it's a sit-on-top, and you don't have to worry about the cockpit filling with water). But one thing about a skinny kayak is that it's also tippy (if you don't have good balance and paddling skills, it can tip over). The surfski I'm currently using is a 20ft Epic V10 Sport. It's a composite hybrid of fiberglass, carbon fiber, and Kevlar, and a bit wider and heavier than the surfskis the pros use. 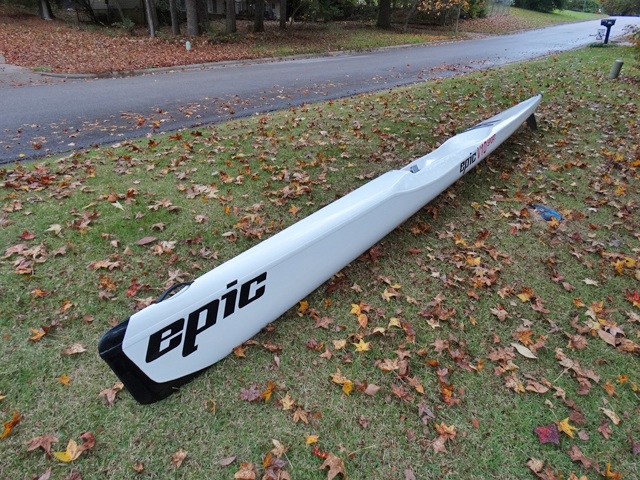 If I paddle hard, I can generally go 5.5 to 6.5mph in my V10S. That's pretty fast, but still a bit slower than my buddies who paddle Olympic-style K1 sprint kayaks ... and I hate to lag behind when they let me practice with them. Therefore when the opportunity to buy a used Epic V12 Ultra surfski popped up, it piqued my interest. It's a foot longer, 2 inches more narrow, and about 7 pounds lighter than my boat ... and reputed to be a good bit faster! But with more speed comes less stability ... and you can't go very fast if you keep falling out of your boat!

So my decision on whether to pursue the V12 depended on (potentially) how much faster it is, and how tippy it is. I did a bit of web searching, and came across a page on the surfskiracing.org website full of wonderful data on this topic. Wesley Echols is an avid paddler who has owned many (many-many) surfskis, and he was kind enough to collect data on each one, and rate their stability and speed (and several other factors) on a numeric scale. Here's an example of the data in his table:

And he had a few graphs of subsets of the data, such as the following: 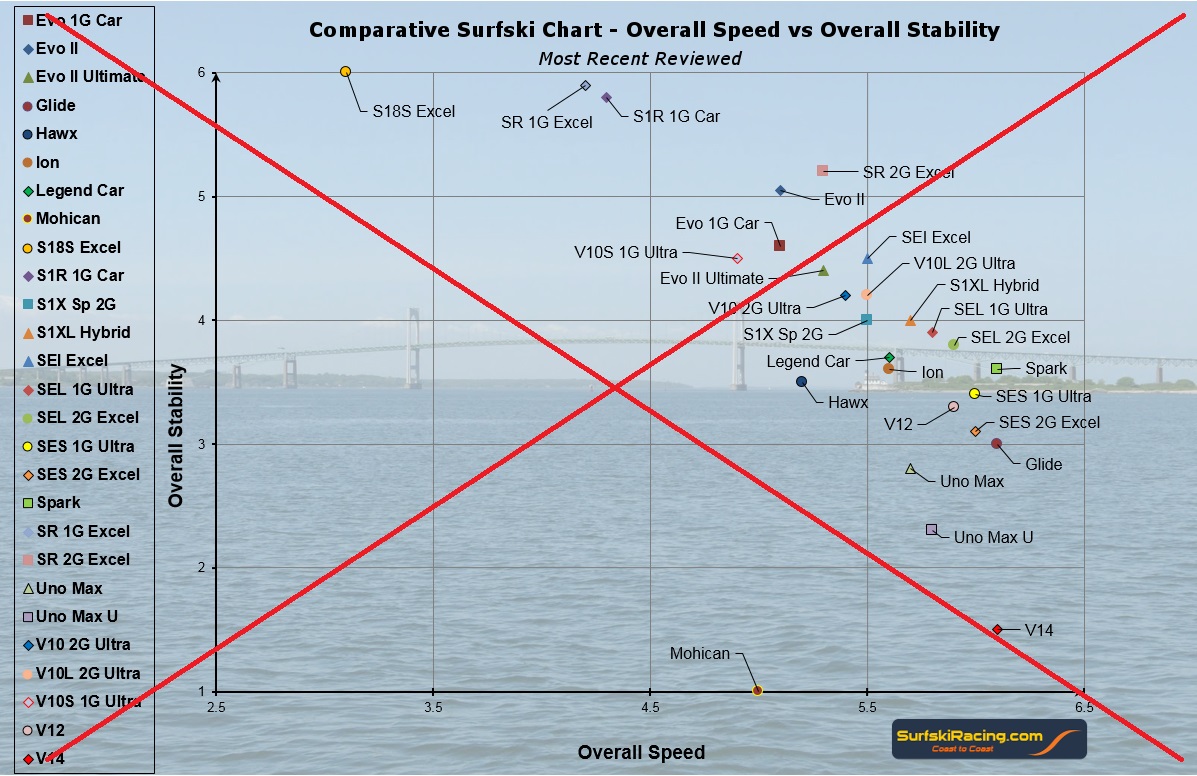 I loved that they had data & graphs, but I was chomping at the bit to try creating my own graph. Here are a few of the changes and enhancements I had in mind:

Here's the graph I came up with. Click it to see the interactive version with the mouse-over text. 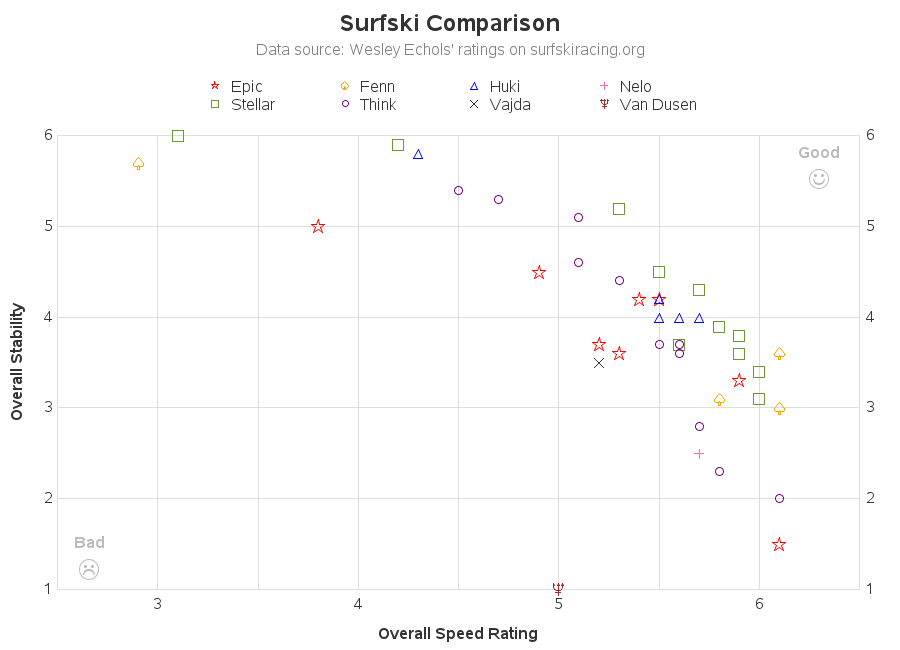 Here's a screen-capture of some sample mouse-over text, for my Epic V10S: 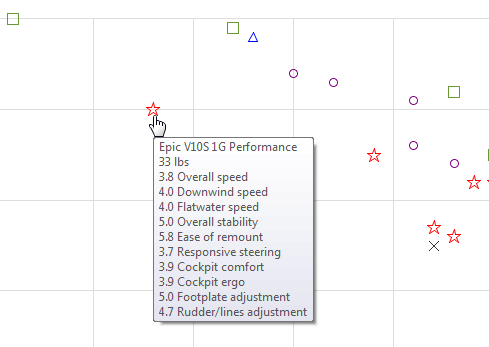 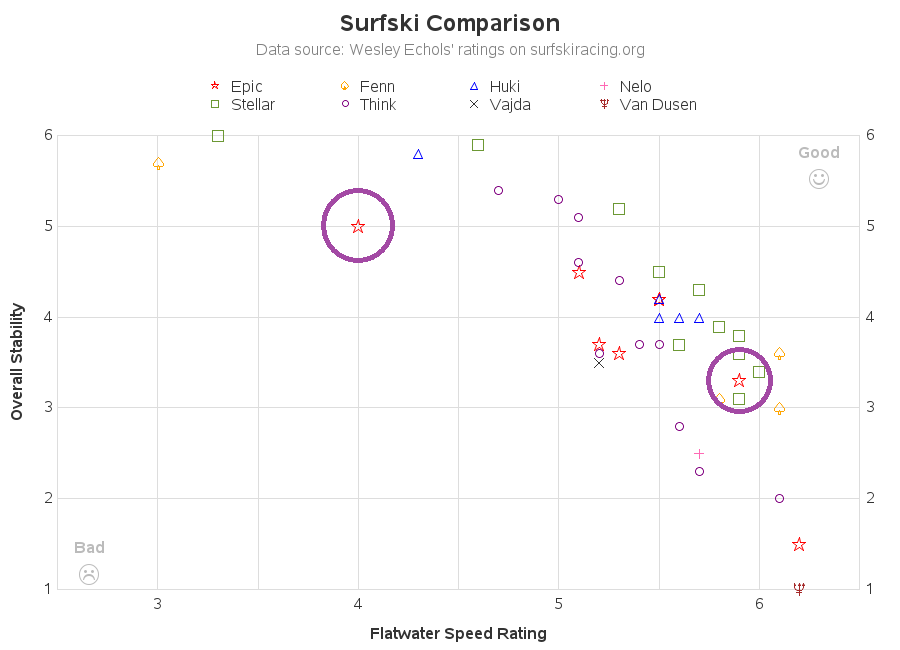 Looks like the V12 will be a definite step up in speed, with a relatively small sacrifice in stability ... on paper, at least. The true test will be paddling the boat, which I plan to do after work today. I will be happy if I can get an extra 1mph, without falling out of the boat! :-)