With all the recent talk about some people wanting to move from the US to Canada, I got to wondering how cold, and how far north Canada is. And after a few Google searches, I was surprised to learn that 27 US states are actually farther north than the southernmost point of Canada! This seemed like a good thing to show & prove on a map...

But before we get to the map, here's a photo from my friends Joy & Erik, to get you into the mood for a blog about Canada. This is the border crossing as they were entering Alberta (from Montana), on their way to see the Canadian part of Glacier National Park. These guys travel a lot, and this was one of their 'short' trips from NC ... only about 2,350 miles away! (They didn't move to Canada, by the way - just visiting!) 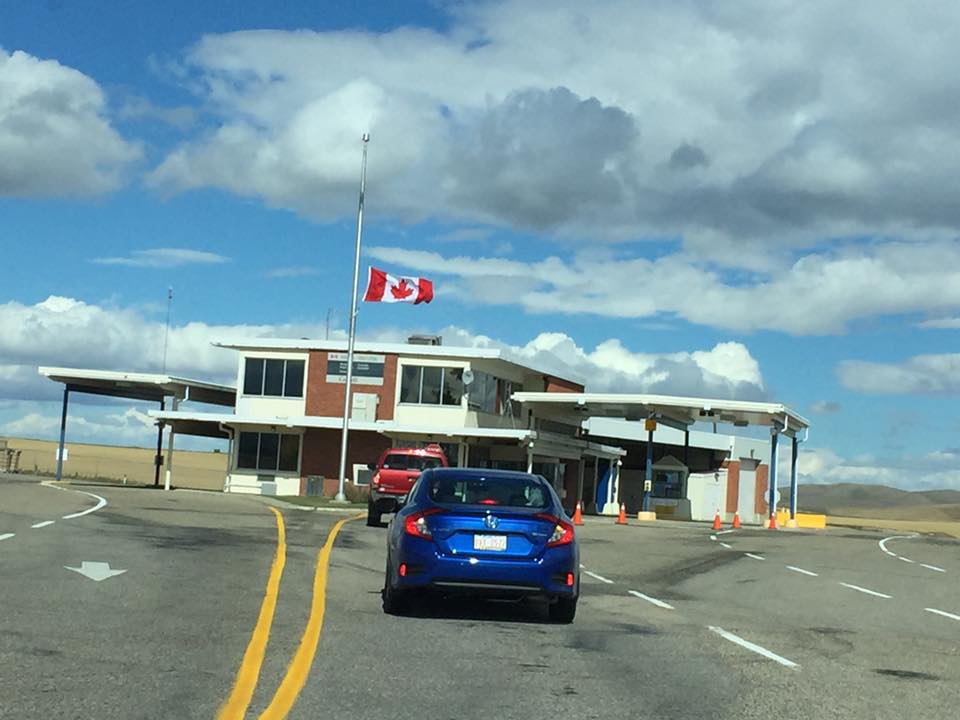 Now, how about those 27 US states that are farther north than Canada?!?... Below is one of the many maps I found in my web search on that topic. They placed a marker at the southernmost point of Canada, and the US states which are at least partially north of that point are shown in dark gray. I guess their map covers the basics, but here is a list of the things I would like to improve about it:

I started my map by adding Canada, leaving Alaska in its proper geographical location, and adding some descriptive labels to the map. I used the following SAS SQL code to determine the southernmost point in Canada (calculated from the map data), and save it into a dataset so I could annotated it on the map as a red dot. I also saved the lat/long values of this coordinate as SAS macro variables, so I could easily use them later in the code to do other things (such as calculate points along the line). In case you're curious, the minimum point in Canada is at approximately latitude 41.7 degrees north. 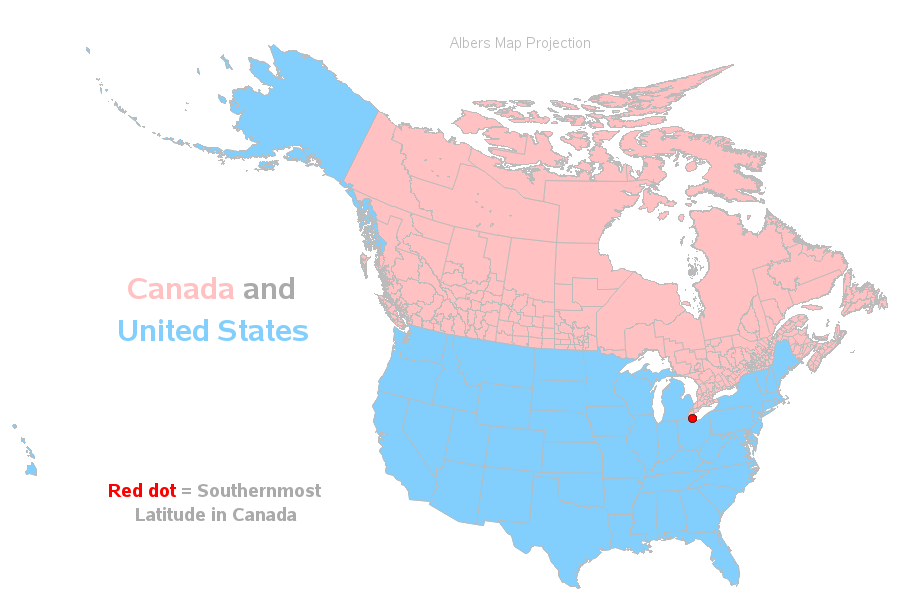 Looking at the map above, your instincts might tell you to visually draw a horizontal line at latitude 41.7, and see which US states are at least partially above that line. But that is the wrong thing to do! (Notice that New Jersey crosses this simple horizontal line.) 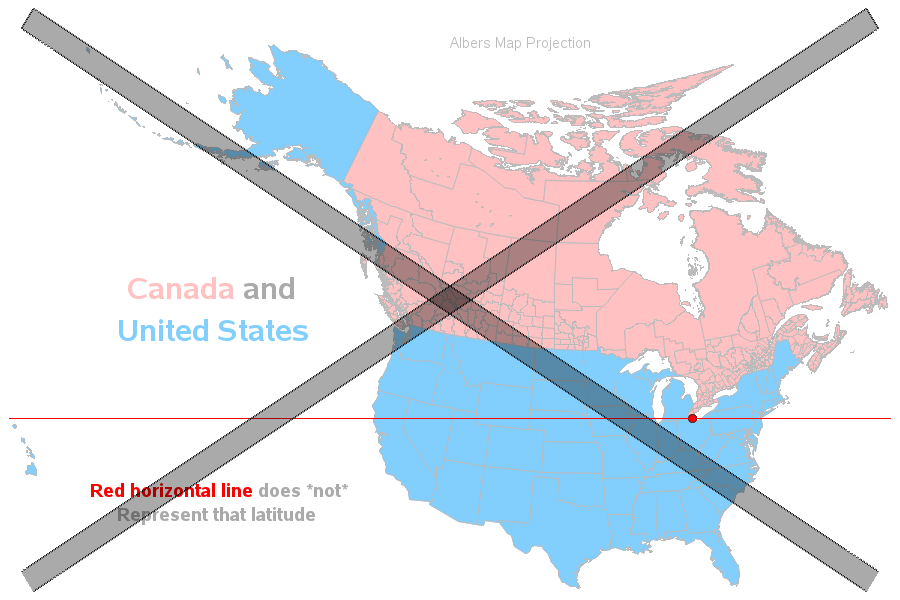 Why was that wrong?

The Earth is a globe/sphere, and in order to view a portion of it on a flat page we have to 'flatten' it out. And to do that, we have to stretch some areas. We do this flattening & stretching of the map using various projection techniques - the above map was flattened using the Albers projection, centered on the 48 contiguous US states. If you use the projection on the map, you also have to use the projection on the points along the latitude=41.7 line. In the map below, I use the Albers projection on both the map and the line. With the properly curved/projected line, it is now easier to see that New Jersey is now totally below that line. 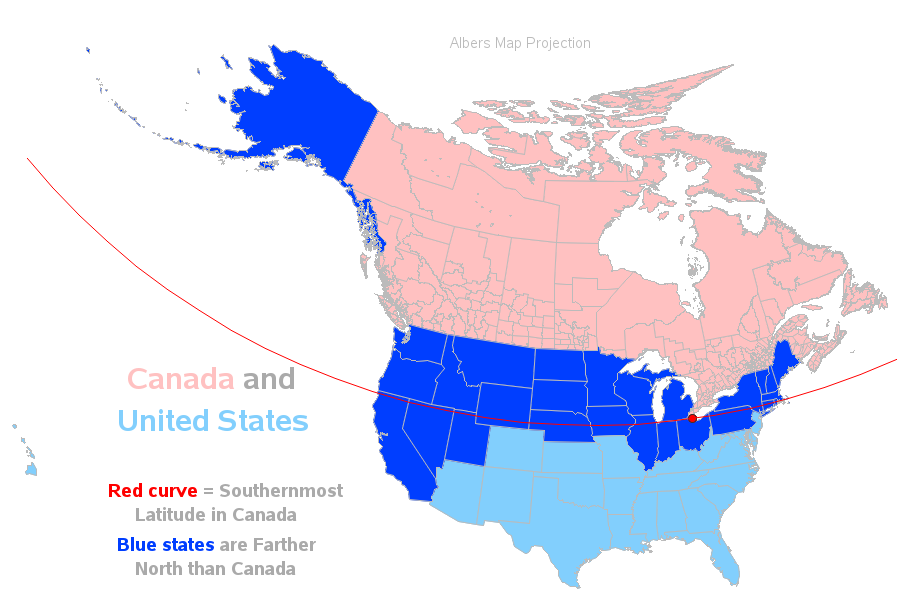 You might be thinking "projection techniques and curved lines of latitude - ugh!" My map-geek friends understand this kind of thing, but can't we create something simpler, that will be intuitive to non-map-geeks? Isn't there some way we can just use a simple/straight/flat line? I'm glad you asked! If you use the cylindrical projection, the lines of latitude do come out that way! The map might look a little 'squished' compared to what you're used to seeing, but I think the straight line makes it a lot more intuitive that the line is dividing things into north and south. Here is an alternative version of the map, using the cylindrical projection. 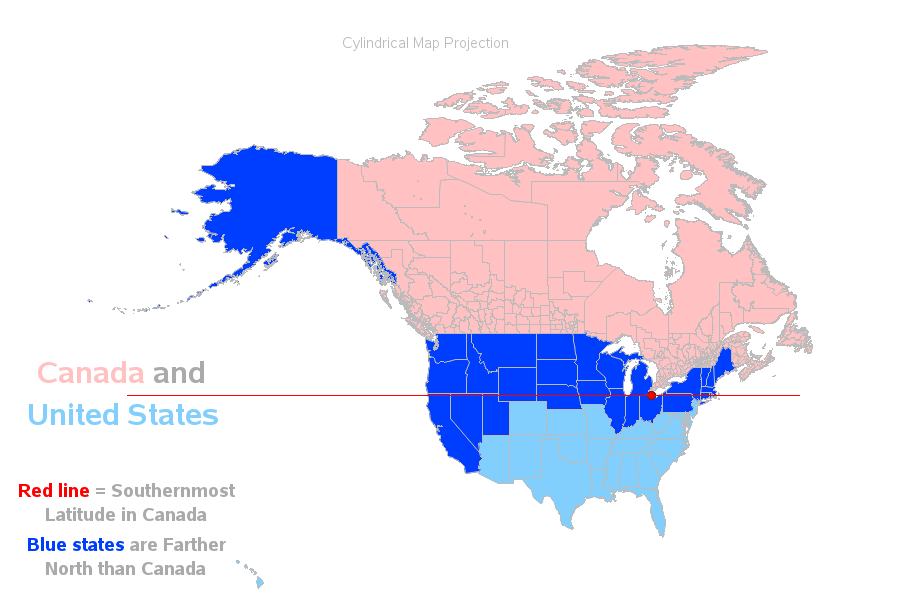