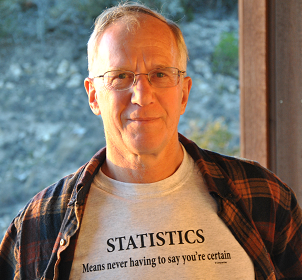 In order to demonstrate how to accomplish these two tasks, first run the program below to create a data set called Original. This data set contains numeric values of 999 and some character values in either lowercase or mixed case:

Below is a listing of data set Original: 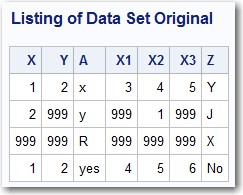 The program below searches a SAS data set for all numeric values equal to 999 and converts these values to a SAS missing value.  The program also converts all character values to uppercase.

You use the two keywords _NUMERIC_ and _CHARACTER_ in the ARRAY statements to start the ball rolling.  When these keywords are used in a DATA step, they refer to all of the numeric or character variables at that point in the DATA step.  This is an important fact.  If you had placed the two ARRAY statements before the SET statement, the two arrays would not contain any variables.

The output is shown below: 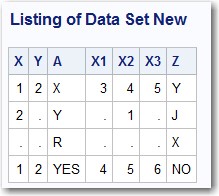 Notice that the original values of 999 are now missing values and all the character values are in uppercase.  Please think of this technique any time you need to perform an operation on all numeric or character variables in a SAS data set.