Discovery Channel's Shark Week starts July 5, 2015 - and I've created a special SAS map & graph of shark attacks in North Carolina to get you in the mood for their week of shark education!

But first, to get you in the mood for my blog, here's a picture of my friend Kirk, posing for a "shark bite" picture on his boat (note that no sharks were harmed in the making of this picture, lol). Captain Kirk is a lot of fun, and you should go fishing on his boat if you're ever visiting Marco Island Florida! 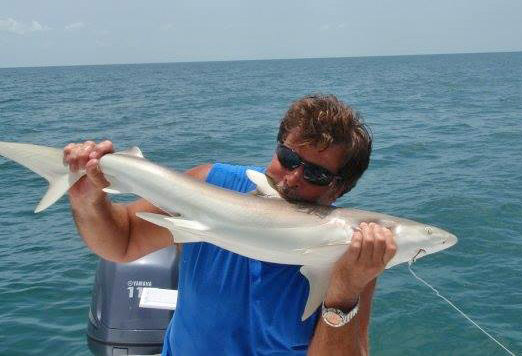 As you probably guessed, the picture above isn't the typical kind of "shark bite" - it's usually the other way around (ie, a shark biting a person). For example, two children recently each lost an arm in shark attacks at two different North Carolina (NC) beaches on the same day (June 14, 2015). This kind of event seemed rare to me, but I knew I should check the data before jumping to conclusions...

So check the data I did! I first found a list of NC shark bites in an article on the WRAL news site. But it was just a list, and you had to expand each one to see a couple of lines of summary data. I went to one of the sources they listed (the Global Shark Attack File), and downloaded their incident log, and imported it into SAS.

I then filtered it to just NC, and standardized some of the location names so that I could geocode them (ie, estimate the latitude/longitude with Proc Geocode), and then hard-coded the lat/longs for some of the locations that weren't cities. After all the data preparation, I was able to plot them on a map! 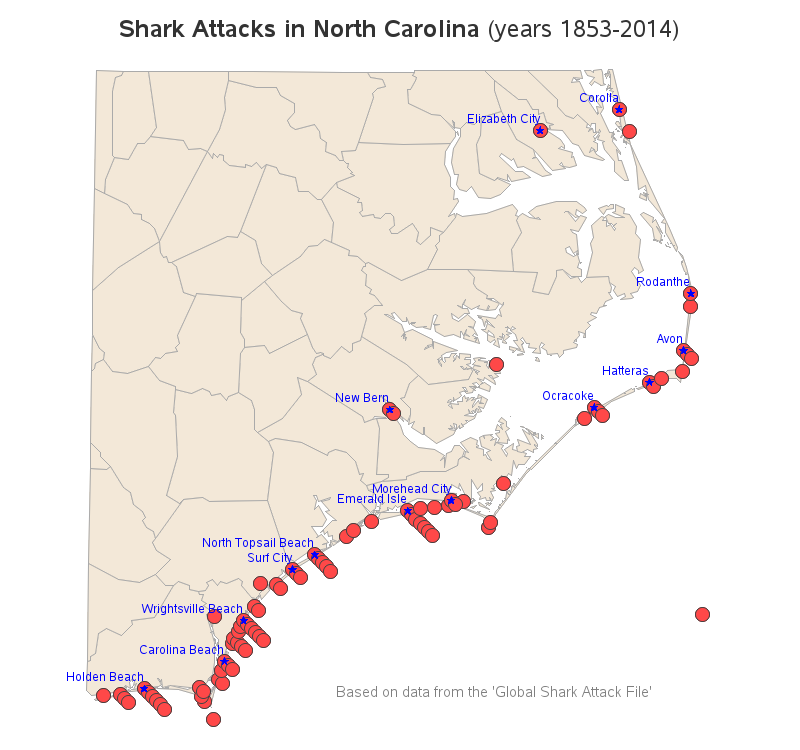 To me, the data is so much easier to comprehend when you can see it on a map. And if you click on the map image above, it will take you to the interactive version of the map, and you can hover your mouse over each marker and see some summary information (date & location), and click on the markers to see the detailed report on each incident. I found it very interesting to read about the shark attacks - especially the really old reports from the 1800s and early 1900s.

If you'd like to see even more shark graphs, check out my blog post from last year, Oh buoy! It's time for some Shark Week graphs!

So, what's your shark story? Have you ever had a "close encounter" with a shark? How did it turn out? (Feel free to leave a comment to share your story!)