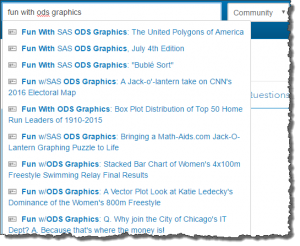 SAS Community member @tc (a.k.a. Ted Conway) has found a new toy: ODS Graphics. Using PROC SGPLOT and GTL (Graph Template Language), along with some creative data prep steps, Ted has created several fun examples that show off what you can do with a bit of creativity, some math knowledge, and open data.

And bonus -- since most of his examples work with SAS OnDemand for Academics, it's easy for you to try them yourself. Here are some of my favorites.

Learn to draw a Jack-O-Lantern

Using the GIF output device and free data from Math-Aids.com, Ted shows how to use GTL (PROC TEMPLATE and PROC SGRENDER) to animate this Halloween icon.

The United Polygons of America

Usually map charts with SAS require specialized procedures and map data, but here's a technique that can plot a stylized version of the USA and convey some interesting data. (You might have seen this one featured in a SAS Tech Report newsletter. Do you subscribe?) A look at Katie Ledecky's dominance

Using a vector plot, Ted shows how this championship swimmer dominated her event during the summer games in Rio. This example contains a lot of text information too; and that's a cool trick in PROC SGPLOT with the AXISTABLE statement. Click on the image for a closer look. This example is nerdy on so many levels. It's a take on the Computer Science 101 concept of "bubble sort," an algorithm for placing a collection of items in a desired order. In this case, the items consist of Christmas songs recorded by Michael Bublé, that dreamy crooner from Canada.

Ted posts these examples (and more) in the SAS/GRAPH and ODS Graphics section of SAS Support Communities. That's a great place to learn SAS graphing techniques, from simple to advanced, and to see what other practitioners are doing. Experts like Ted hang out there, and the SAS visualization developers often post answers to the tricky questions.

In addition to his community posts, Ted is an award-winning contributor to SAS Global Forum with some very popular presentations. Here are a few of his papers.