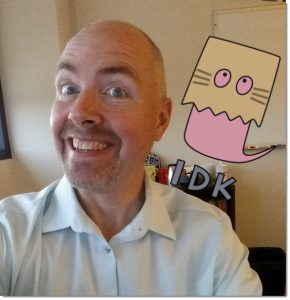 Definitely NOT a copyrighted Pokémon

Today is #EmbraceYourGeekness day, and you are either reveling in this new crazy town inhabited by Pokémon GO, or you are hiding in your house trying to avoid all of the Pokémon GO zombies wandering around.

But since I'm living in SAS these days -- not just the place (at SAS headquarters), but the software -- I decided to see if I could use my SAS tools to "find" some Pokémon in my work. Thanks to PROC HTTP and fantastic service called the Pokéapi, I've managed some success.

PROC HTTP is the the SAS procedure that you can use to call REST APIs. And the Pokéapi site is a REST API that yields on-demand information about our new favorite creatures. Here's a quick example:

I need a DATA step to read and parse some of the API response, which is in JSON. I'm using a simple INFILE with SCANOVER to parse out just a few bits and create a data set of all the character names (811 of them). The API response is basically one huge line of text, so I'm using the @@ directive to keep the INPUT statement working on the same "record."

I can also use PROC HTTP and the API to gather an incredible amount of detail about each character. I found Jigglypuff at record 39, so here's my code to retrieve and parse some more details. Note that there are hundreds of attributes available for each character, and I'm pulling just a couple of them.

Going to "the source" for raw Pokémon data

Parsing JSON using SAS is fun and all, but sometimes you just want access to the raw data. And it turns out that the Pokéapi folks have a project on GitHub with everything we need. We can use PROC HTTP to get to that too! And then use SAS to join and analyze/visualize the results! These calls are to the GitHub site to access the "raw" view of data files in the repository. Note: GitHub does use HTTPS (sorry, SAS University Edition users...).

Update 15Jul2016: Since I originally published this post, I've heard from Pokémon experts and data visualization experts. They correctly pointed out that my default PROC FREQ plot did not represent the best of SAS graphics nor Pokémon abilities. I've adjusted my code and republished with these changes:

Here's what PROC FREQ and SGPLOT shows about how common some of the abilities are among the Pokémon. "Levitate" appears to be common (good thing, because I'm not sure that they all have legs). 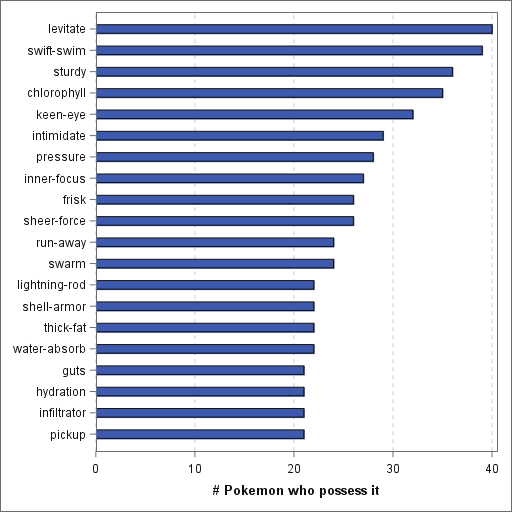 And the table of less common abilities and who has them? Simple to show with PROC PRINT. I see that "slow start" is uncommon (but that's an ability that I think I can claim for myself...). 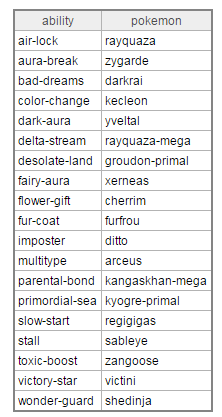 Full code: I placed all code presented here in a public Gist on GitHub. Enjoy!