I'm in the grocery store with a "mental" list of 3 items to pick up: bread, eggs, and something unusual like cupcake liners. My phone rings. It's my wife (or sometimes a daughter) asking me to pick up one or two more things, maybe orange juice and bananas. Suddenly, the entire list vacates my mind, as if a gate was left open. I will leave the store having forgotten something.

That happens to me all of the time. I now ask my family to simply text the grocery list to my phone so that I have it for reference (as long as I remember to look at my phone). But according to Nelson Dellis, memory expert and 2014 USA Memory Champion, that's not the way to improve my memory. 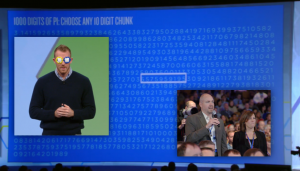 Instead, I should be training my brain to remember more things, perhaps using interesting and vivid images to help create a "memory palace" that I can easily traverse and retrieve memories as I need them. That's how Nelson developed his extraordinary memory performance, which allowed him to achieve feats such as memorizing pi to 1000 digits. ("Frankenstein hackey-sacking a missile" was one of his example memory anchors.)

Nelson proved his memory prowess in front of thousands of SAS users at SAS Global Forum, and I helped him to do it. My part was to point at a digit in the middle of the 1000-digit sequence, then read the 10-digit sequence from that point. Nelson would then recite the 10 digits immediately following my sequence, and then the 10 digits preceding.

On his first attempt, Nelson came up empty. It might have had to do with the way I read the digits (hey, it's harder than it looks!) or perhaps it was just dumb luck. But we tried again, and success! Then another audience member read a sequence, and Nelson rattled off the 20 surrounding digits. We were all amazed. 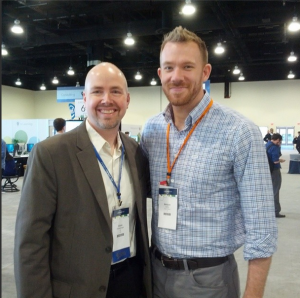 Nelson was an excellent sport throughout the rest of the day. Our SAS internal communications folks had him memorizing employee names, reciting song lyrics after having just one minute to review them, and playing a kid's matching card game. He performed admirably.

We caught up later in the Demo and Support Center, and he assured me that he held no hard feelings for my part in his missed pi performance (as he redeemed himself anyway, to much applause from the crowd). As you can see from this photo of us, he's a tall dude. (For comparison, I'm 6'1" and change.) I was pleased to see Nelson get some very positive press recently on Mashable, where you can read more about his background, his personal story, and his memory techniques.