For several releases, SAS has supported a cryptographic hash function called MD5, or "message digest". In SAS 9.4 Maintenance 1, the new SHA256 function can serve the same purpose with a better implementation.

UPDATE: Since first writing this in 2014, SAS has added a richer set of hashing functions/methods. They include MD5, SHA1, SHA256, SHA384, SHA512, CRC32 and HMAC methods. See "Hashing functions and hash-based message functions in SAS" in the documentation.

The job of a hash function is to take some input (of any type and of any size) and distill it to a fixed-length series of bytes that we believe should be unique to that input. As a practical example, systems use this to check the integrity of file downloads. You can verify that the published hash matches the actual hash after downloading.

Sometimes a hash is used to track changes in records within a database. You first calculate a hash value for each data record based on all of the fields. Periodically, you recheck those calculations. If a hash value changes for a data record, you know that some part of that record has changed since the last time you looked.

Here's another common use: storing passwords in a database. Because you can't (theoretically) reverse the hash process, you can use a hash function to verify that a supplied password is the same as a value you've stored, without having to store the original clear-text version of the password. It's not the same as encryption, because there is no decryption method that would compromise the original supplied password value.

MD5 has known vulnerabilities, especially with regard to uniqueness. A malicious person can use a relatively low-powered computer to compute an input that produces an identical hash to one you've stored, thus compromising the algorithm's usefulness.

Enter the SHA256 algorithm. It's the same idea as MD5, but without the known vulnerabilities. Here's a program example:

Output (formatted as hexadecimal so as to be easier on the eyes than 256 ones-and-zeros):

As the name implies, it produces a value that is 256 bits (32 bytes) in size, as compared to 128 bits from MD5. Here's a useful article that compares the effectiveness of hash algorithms.

If you've been wanting to hash your data in SAS, but you've been poo-pooing the MD5 function -- well, now is your chance! 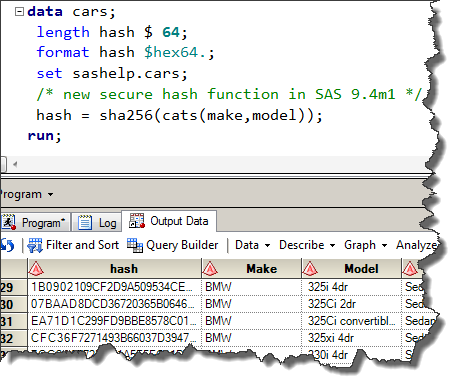