On his SAS and R blog, Ken K. recently posted an example of a visualization technique called "small multiples".

In this exercise, Ken shows the programming technique for replicating a particular series of pie charts in R as well as in SAS. It's a useful exercise to learn from, but I wasn't crazy about this method for visualizing the particular data that Ken used. The data set contains values for the popularity, salary, and unemployment rates for college majors. Since last week was Computer Science Education Week, and Computer Science compared favorably in the results, I was interested in featuring a different visualization for this.

That's when I challenged one of our SAS visualization experts, Robert Allison, to take a shot at it. Initially, Robert didn't bite. But then someone else asked him to try, and he relented. (That's how much pull I have around here.) 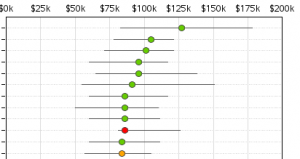 In my opinion, Robert's result is easier to read and easier to understand. It's easier to see "ranking" of disciplines by the interquartile ranges, and there is a visual indication (albiet a bit arbitrary) as to whether each discipline has low, medium, or high unemployment rates. (Note: I believe that the "small multiples" technique can be very useful with other types of charts, such as series, small bars, etc.; just not with so many pie charts...)

Note: I shared this result with Ken in the comments on his blog. He appreciated the effort, and responded with a bit of critique, highlighting some of the tradeoffs that result in this alternative version.