In August 2018, Hurricane Florence came on shore in North Carolina. Much of the damage was from flooding because the storm moved slowly over North and South Carolina.

Parts of North Carolina had over 30 inches of rain from the storm, and this caused many of North Carolina’s rivers to overflow their banks because the water just does not have any place to go.

In this example, North Carolina GeoSpatial data for the major river basins is downloaded and used in PROC SGMAP as SERIES statements. The path of the storm is also plotted so you can see why the Cape Fear River Basin had major flooding.

This example is building on earlier blog entries and highlights the:

Here is the complete code for this example.

Working with the Shapefiles

Once the shapefiles have been unzipped, use PROC MAPIMPORT to import the data:

Here is an example of how this procedure looks. id objectid is used because many shapefiles use this variable to organize data.

A PRJ file is included with the shapefiles. This file includes a line something like this:

This is an indication of the parameters used for the GProject from= option.

See spatialreference.org for these projections. For the above example, search for North Carolina State Plane and you will see NC State Plane Coordinate System. Click on that and then click the link for the Proj4 to reveal this:

Use this string for from= in GPROJECT. The to= setting is always EPSG:4326 for OpenStreetMap and Esri maps.

PROC GPROJECT for this example is:

The Cape Fear river is about 30 miles south of SAS headquarters and there were reports of the flooding each day. To see this, limit the data to the Cape Fear River Basin: 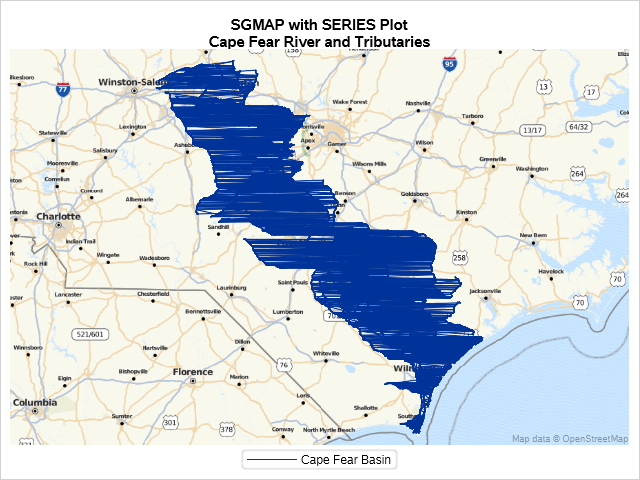 That doesn’t look very good. All the rivers and streams are connected to each other and wrapping around. Maybe using the GROUP option will fix it: 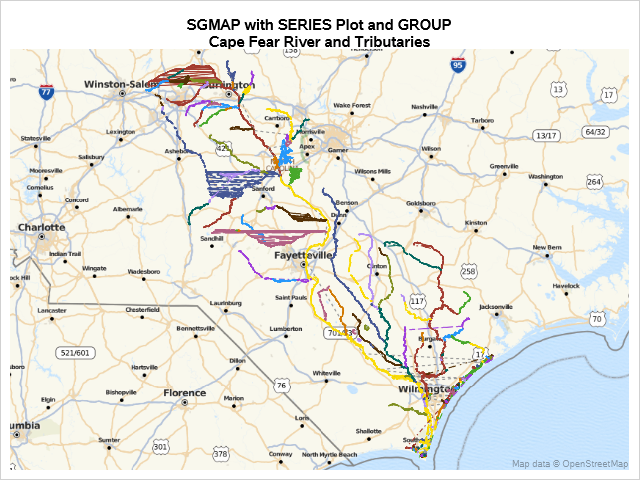 That is better, but some of the rivers and streams still wrap.

The PROC SGMAP SERIES statement breaks lines when there is a missing Y variable value. The missing values are needed when plotting several series lines.

Add some missing Y values in the data by sorting the data by objectid, then use the LAST.variable to insert a record with a missing Y:

Try running without GROUP since segments are now separated by missing Y values: 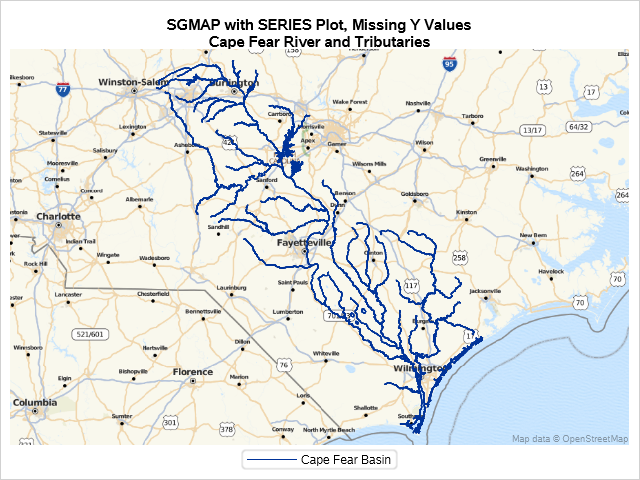 That looks good. The different tributaries for the Cape Fear River are now clear.

Why was this river and all its tributaries a problem after Hurricane Florence? Try plotting the storm's path and strength to find out.

There are several websites that contain hurricane tracking information. Combine the river basin data with the hurricane track data and plot using SERIES and BUBBLE statements in PROC SGMAP. 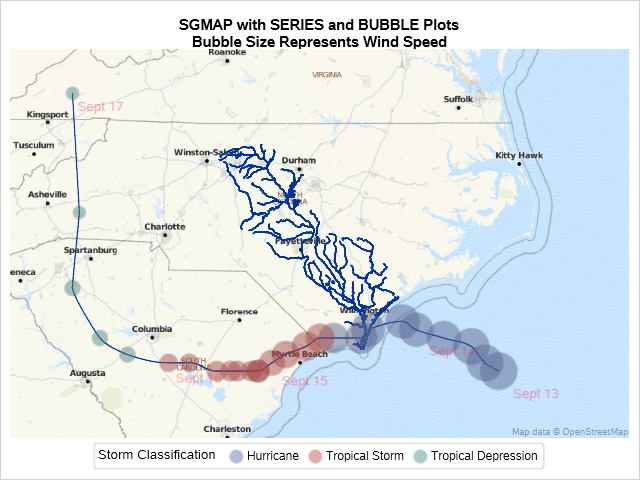 On the East Coast, much of the rainfall from a hurricane occurs on the north side of the storm, so you can see why the path of Hurricane Florence causes flooding in the Cape Fear River Basin. There was just too much water.

From this example, you can see that PROC SGMAP is an easy way to plot data from shapefiles and CSV files on Esri maps and OpenStreetMaps.

Kelly Mills is a Principal Test Engineer with over 30 years of manual and automated testing experience in computer, communications and analytics software industries. He's worked at companies such as Alcatel, IBM and SAS Institute.