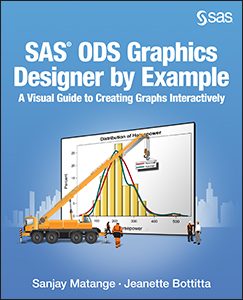 At SGF 2013, I spoke about the Designer with Chris Hemedinger on one of his "Tech Talk" sessions.  Click on the link to see the video, and a short live demo of the software starting at about 4:20 minute mark in the video.

The ODS Graphics Designer (often referred to informally as Designer or SG Designer) is an interactive software for building statistical graphs using GTL under the covers.  No knowledge of graph syntax is required. Designer can be started from the SAS Tools menu as shown on the right. 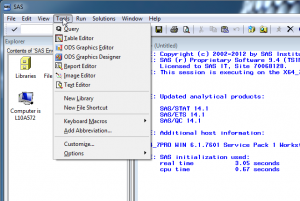 Selecting "ODS Graphics Designer" from the SAS "Tools" menu will launch the Designer application that presents you with a GUI that can be used to create most commonly requested graphs.  Designer generates the GTL code for you as you create the graph interactively.  This code can be viewed using "View->Code" menu inside Designer.  You can copy and paste the code into the SAS Program Editor and run it to get the same results.

A new "Patent Pending" feature released with SAS 9.40 release of Designer is the ability to generate graphs in bulk based on variables selected by users from a data set.  See this feature under "Tools->Auto Charts" in Designer.  Graphs created in Designer can be saved as ".sgd" files, which can be run in batch from the Program Editor using the SGDESIGN Procedure with the same data or a different compatible data set.

Designer is useful for the following audiences:

Designer is very popular at conferences and user group meetings, and users love it.  However, most users are unaware of its existence.  I encourage you to take it for a spin.