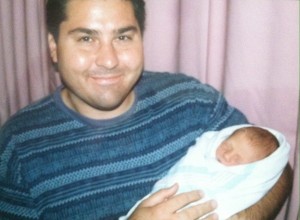 I celebrated my first Father's Day as a father 17 years ago.

It’s Father’s Day and once again I am crowd-sourcing some fatherly advice to provide guidance to marketers. While marketing and the world we live in have changed dramatically, the essence of fatherhood has remained fairly constant. Part hands-on and part supportive of their children’s mother, dads are often thought of in their role as the house’s fixer-in-chief. If the toilet overflows, if the bike chain goes off track, or if the family car gets another unexplained spontaneous dent, it’s often dad who gets called in to take care of it.

So as marketers deal with the increasingly complex mandates we fulfill in the enterprise, here are some pearls of wisdom from my colleagues that may come in handy when we need a fixer-in-chief:

If you lost an engine, look out the window at the wing and use the horizon.

Karen Morse’s dad, the Rev. Ralph Jackson, is a retired minister, pilot and FAA private pilot instructor who would tell that to Karen as she learned to fly their Piper Cherokee. That could also apply if the pilot uses their navigation system.

The lesson for marketers is that more than one reference point is helpful to gauge progress toward the goal, so if something goes awry not all is lost mid-stream. It’s also a call to think of broader business goals to understand marketing’s impact as the pace of technological change accelerates – the horizon and its relationship to the destination are two constants in any flight that can be relied upon. That relationship is analogous to marketing in the grand scheme of your business.

When you use something, always put it back where you found it.
Always remember what happened and keep the history alive.

These two are from Michelle Pujol, Director at Univision Direct, and Godmother to my children. The first advice is from her father, Joaquín Pujol, who explained that if you don’t put things back then you’ll have a heck of a time trying to find it the next time you need it. The second advice is from her Opa, an Austrian Holocaust survivor that explained to his grandchildren that if those that come before us don’t know what happened, history can easily repeat itself.

These both speak to the need for marketers to keep and analyze data so the drivers of success and the causes of failure can be identified and harnessed to constantly improve, and to benefit newcomers to the organization.

Find a stream and fish.

Beth Bullard’s dad has a passion for fly fishing. In fact, he has earned the name ‘trout whisperer’ from his buddies for his uncanny ability to attract fish in very unlikely fishing spots. Now fully immersed into retirement life, my dad is known to travel around with his rod just on the off chance that the perfect opportunity presents itself. Through his passion, the translation of the lesson from my dad is really simple – find what you love and make time to do what you love as often as you can.

Beth has a few takes on marketing parallels from this advice:

1.  Set yourself up for success; always be at the ready to seize an opportunity.
2. Streams are not always in plain sight - sometimes you have to get to know the territory and get off the beaten path to uncover the best opportunities.
3. Conditions may not always be optimal, but that doesn't mean you shouldn't try. The best outcomes can often be those that surprise us, and if we aren't willing to try we'll never know.
4. Throw them back and keep fishing, so celebrate success but try to do better each time and you'll constantly improve!

Mibbie Majors shared that her dad always taught her and her sisters to be honest, no matter what. Sometimes it may have seemed extreme, such as going back to a store to return a penny (yes, just a penny) because they gave my Dad too much change. But it was a great life lesson to learn from him. Now my sisters and I sometimes call him ‘Honest John’ because he is!

The lesson for marketers here is particularly important in our era of sharing experiences – social media has a way of quickly exposing (and amplifying) inauthenticity. Integrity, having the best intentions and full disclosure matter like never before!

Never back your opponent into a corner

Colonel Luther Rice Edwards, my wife’s grandfather, shared this maxim with all his children and grandchildren in the face of schoolyard skirmishes or more mature situations. Col. Edwards was an attorney that served in the U.S. Army as a Judge Advocate over several decades, giving him the chance to preside over many cases. The positive shadow he cast was long and wide and stories about him abound that point to his belief in human dignity and the need to conduct yourself accordingly. Even when you’ve clearly won your case, you should always afford your opponent a face-saving way out, or other way to retain their dignity – taking that approach will never fail you.

For marketers, this concept is similar to the one from Mibbie in relation to honesty – if we engage with our customers and all other stakeholders with integrity and respect, that will form our reputation and we’ll likely be treated in kind. Even our competitors have worthy offerings and positions, and there will be times they make more sense for some segments of our target markets. We should always respect that and learn from it.

This nugget comes from Barb Anthony from her dad, Bill Ludwig. Her interpretation is that marketers may often feel like they’re doing the job of 2-3 people, making it seem like it’s hard to keep up.  Being organized and managing your time will allow you to create efficient workflow processes and still leave time for “idea generation.” Some of the biggest mistakes in marketing occur because we run out of time or miss a key component that may cause a campaign to fail. Organization and time management skills give a marketer the ability to effectively map out a course of action to achieve a desired result within a given deadline.

Ever since I became a father 17 years ago, I’ve learned almost as much as the “fixer-in-chief” at home as I have in my evolving role as a marketer. And with marketing having changed more in the last 5 years than in the 20 years before that, we can gain inspiration and answers from our fathers’ advice. This is the second time I’ve celebrated Father’s Day with a blog post, before posting Fatherly advice for marketers on Father’s Day.

My father always told me that I had to believe in myself before I could convince anyone else, so I’ll send you off with that finishing thought. You’re very good – believe it.  And happy Father’s Day!