How often does a graph change the world? In 1854, Doctor John Snow produced a map to plotter cholera cases by drawing on a London map a bar for each reported death. Until then, it was believed that cholera was spread by miasma in the air, however, transmission method has not been confirmed and the sudden outbreak of cholera in London’s Soho was a big mystery. So Snow did something data journalists often do now: he mapped the cases. It was then that it became apparent that the cases were clustered around the pump in Broad (now Broadwick) street. 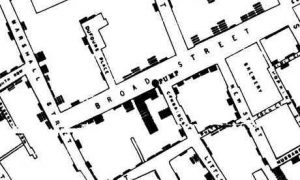 “In the early 1970s, years before access to the Internet was universal, Richard Saul Wurman, predicted that the oncoming information explosion would require the intervention of a new breed of professionals trained in organizing data and making sense out of it. According to Wurman, the biggest challenge our species was about to face was to learn how to navigate the upcoming tsunami of bits that was cresting the horizon” (Cairo, 2013). In this context, data visualization provides a mean of navigating to large amounts of data. The below model explains what visualization and graphs are about.

The way the human brain perceives knowledge makes the use of charts and graphs into visualizing large amounts of complex data easier than poring over spreadsheets or reports. Thus, the first and the main goal of data visualization tools is to be the tool for your brains to perceive what lies beyond their natural reach.

Cairo, A. (2013) ‘The functional art: an introduction to information graphics and visualization’. New Rider, 15.