During my morning commute I heard an interesting news story on NPR's Morning Edition about the merits and risks of the $100 bill. Apparently there are a lot of them in circulation, but no one knows exactly where they are. According to the report, they are seldom used for legitimate business transactions. When a transaction reaches into the hundreds of dollars, the business parties tend to resort to a digital transaction (or maybe a good-old-fashioned personal check). Large cash transactions are often used to avoid taxation or, more nefariously, to hide criminal activity.

One stat from the story stuck with me: 80 percent of the currency value that is in circulation right now is in $100 bills. When I hear a number like that, my first instinct is to find the data and verify it. It was easy to find on the US Federal Reserve: Currency in Circulation web site.

I could have copied and pasted the table for use in SAS, but the Fed already makes an ASCII version of the table available for nerds like me. With a bit of SAS code I was able to download the data, transpose it for analysis, calculate the currency values for the counts of the various notes, and create a graph that verifies what I heard on the news. Indeed, much of our nation's cash wealth is floating around on a bunch of Benjamins. 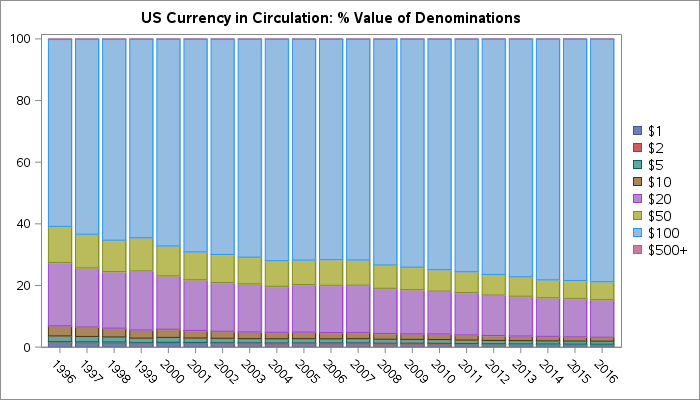 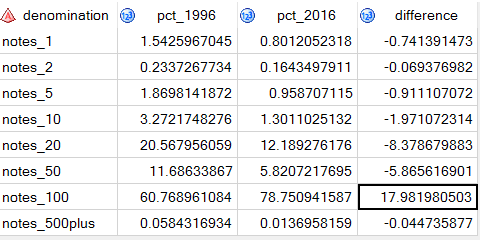 If we look at the percent breakdown by bill counts (instead of value), you can see the shifts a bit differently. 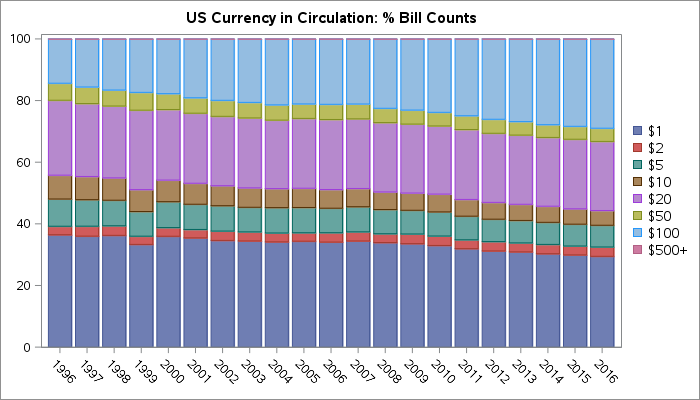 I created those two plots by calculating the percentages with PROC FREQ, and then using PROC SGPLOT to graph Year, using the percentages as the response value and stacking the data by Denomination. I used GROUPORDER=Data to keep the data colors and legend consistent across the different graphs. The raw values are interesting to examine as well, as it more clearly shows the trends for the past 20 years. Here are the two representations (cash value and bill counts) with their actual values and not just the percentages. 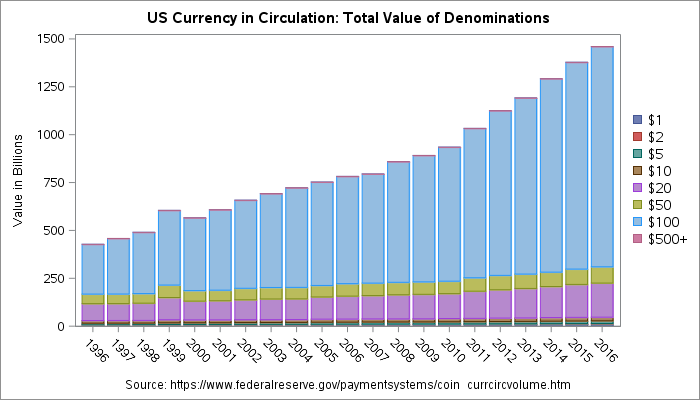 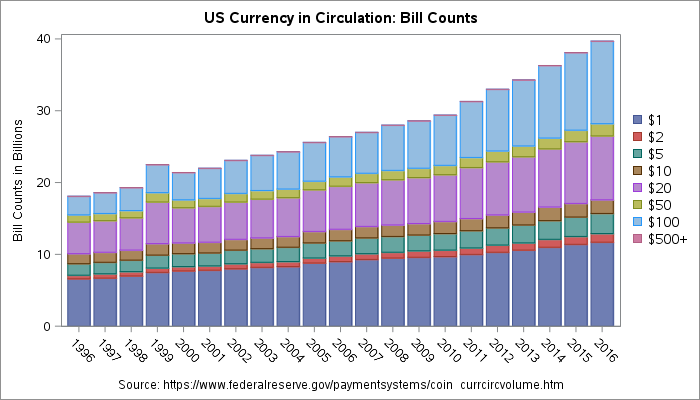 An interesting aside: the $2 bill remains a novelty. I had the opportunity to spend a few of these recently, and the person receiving them had to be convinced that they were real money. It made me want to secure more $2 bills (a.k.a. "some Jeffersons") for future transactions -- that's the sort of trouble-making consumer that I like to be.

In case you're interested, here's the SAS program that I used -- try it yourself! (If using SAS University Edition, you'll have to download the text data first instead of relying on the FILENAME URL statement. Notes in the program.)