The main steps of the bootstrap method in SAS

A previous article describes how to construct a bootstrap confidence interval in SAS. The major steps of a bootstrap analysis follow:

Compute the statistic of interest

This article uses the same bootstrap example as the previous article. The following SAS DATA step subsets the Sashelp.Cars data to create a data set that contains two groups: SUV" and "Sedan". There are 60 SUVs and 262 sedans. The statistic of interest is the difference of means between the two groups. A call to PROC TTEST computes the difference between group means for the data:

Resample from the data

For many resampling schemes, PROC SURVEYSELECT is the simplest way to generate bootstrap samples. The documentation for PROC TTEST states, "In a bootstrap for a two-sample design, random draws of size n1 and n2 are taken with replacement from the first and second groups, respectively, and combined to produce a single bootstrap sample." One way to carry out this sampling scheme is to use the STRATA statement in PROC SURVEYSELECT to sample (with replacement) from the "SUV" and "Sedan" groups. To perform stratified sampling, sort the data by the STRATA variable. The following statements sort the data and generate 10,000 bootstrap samples by drawing random samples (with replacement) from each group:

The BootSamples data set contains 10,000 random resamples. Each sample contains 60 SUVs and 262 sedans, just like the original data. The BootSamples data contains a variable named NumberHits that contains the frequency with which each original observation appears in the resample. If you prefer to use duplicated observations, specify the OUTHITS option in the PROC SURVEYSELECT statement. The different samples are identified by the values of the Replicate variable.

With these definitions, the following call to PROC TTEST computes the Satterthwaite test statistic for each bootstrap sample. Notice that you need to sort the data by the Replicate variable because the BootSamples data are ordered by the values of the Type variable. Note also that the NumberHits variable is used as a FREQ variable.

Obtain estimates from the bootstrap distribution 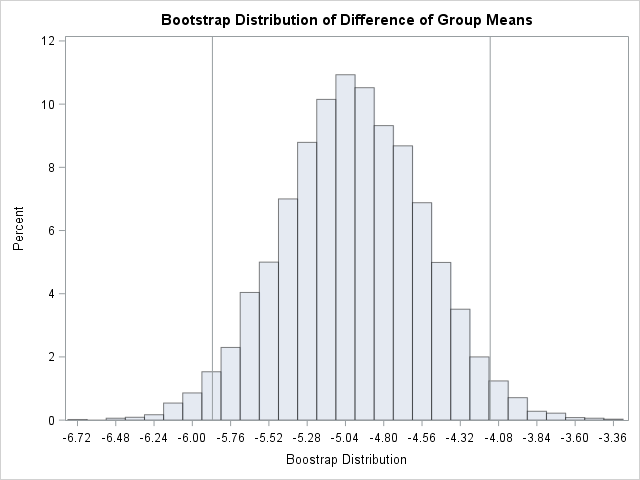 The results are shown. The bootstrap distribution appears to be normally distributed. This indicates that the bootstrap estimates will probably be similar to the classical parametric estimates. For this problem, the classical estimate of the standard error is 0.448 and a 95% confidence interval for the difference of means is [-5.87, -4.10]. In comparison, the bootstrap estimates are 0.444 and [-5.87, -4.13]. In spite of the skewness of the MPG_City variable for the "Sedan" group, the two-sample Satterthwaite t provides similar estimates regarding the accuracy of the point estimate for the difference of means. The bootstrap statistics also are similar to the statistics that you can obtain by using the BOOTSTRAP statement in PROC TTEST in SAS/STAT 14.3.

In summary, you can use Base SAS and SAS/STAT procedures to compute a bootstrap analysis of a two-sample t test. Although the "manual" bootstrap requires more programming effort than using the BOOTSTRAP statement in PROC TTEST, the example in this article generalizes to other statistics for which a built-in bootstrap option is not supported. This article also shows how to use PROC SURVEYSELECT to perform stratified sampling as part of a bootstrap analysis that involves sampling from multiple groups.