The power of a statistical test measures the test's ability to detect a specific alternate hypothesis. For example, educational researchers might want to compare the mean scores of boys and girls on a standardized test. They plan to use the well-known two-sample t test. The null hypothesis is that the means of the two groups are equal. Will the t test be able to detect a difference in the two group means (if it exists) by rejecting the null hypothesis?

In general, the power of a test is the probability that the test will reject the null hypothesis when a specified alternative is true. For the t test, power means the probability that the test can detect a mean difference of a specified magnitude. In general, this can be a difficult computation because it requires knowing the sampling distribution of the test statistic under the alternative hypothesis. For simple tests (such as the two-sample t test), the sampling distribution is known, but for more complicated statistical tests the power computation might be available only by using simulation methods.

Formulation of the problem

The following steps estimate the power for the two-sample pooled t test:

The following SAS statements define parameters for the simulation and use the DATA step to simulate 5,000 simulated trials. All of the data are in a single data set, and the SampleID variable identifies which observations belong to which simulated trial. In this simulation, each group has 10 observations and the true difference between the population means is 1.2, which is a little larger than the standard deviations of the populations.

As I have written previously, use BY-group processing to carry out efficient simulation and analysis in SAS. Also, be sure to suppress the display of tables and graphs during the analysis by using the the %ODSoff and macro. The following SAS statements define the %ODSOff and %ODSOn macros, and analyze all data for the simulated trials:

The TTEST procedure creates an output data set that contains 5,000 rows, one for each simulated trial. The data set includes a variable named Probt, which gives the result of the t test on each trial.

Count the rejections to estimate power 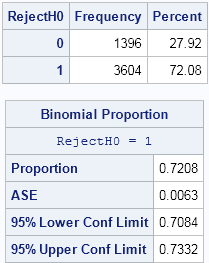 As mentioned earlier, you can use PROC POWER to find the exact power for the two-sample t test, as follows:

The estimate from the simulation is very close to the true power of the t test.

Next week I will extend this simulation to estimate points along a power curve.