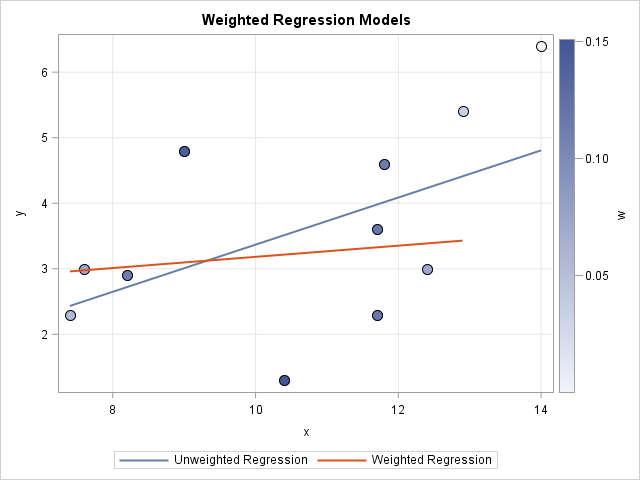 How can you specify weights for a statistical analysis? Hmmm, that's a "weighty" question! Many people on discussion forums ask "What is a weight variable?" and "How do you choose a weight for each observation?" This article gives a brief overview of weight variables in statistics and includes examples of how weights are used in SAS.

Let's start with a basic definition. A weight variable provides a value (the weight) for each observation in a data set. The i_th weight value, wi, is the weight for the i_th observation. For most applications, a valid weight is nonnegative. A zero weight usually means that you want to exclude the observation from the analysis. Observations that have relatively large weights have more influence in the analysis than observations that have smaller weights. An unweighted analysis is the same as a weighted analysis in which all weights are 1.

Frequencies are not weights

Have survey data? Use survey weights

Inverse variance weights are appropriate for regression and other multivariate analyses. When you include a weight variable in a multivariate analysis, the crossproduct matrix is computed as X`WX, where W is the diagonal matrix of weights and X is the data matrix (possibly centered or standardized). In these analyses, the weight of an observation is assumed to be inversely proportional to the variance of the subpopulation from which that observation was sampled. You can "manually" reproduce a lot of formulas for weighted multivariate statistics by multiplying each row of the data matrix (and the response vector) by the square root of the appropriate weight.

In particular, if you use a weight variable in a regression procedure, you get a weighted regression analysis. For regression, the right side of the normal equations is X`WY.

In SAS, most regression procedures support WEIGHT statements. For example, PROC REG performs a weighted least squares regression. The multivariate analysis procedures (DISRIM, FACTOR, PRINCOMP, ...) use weights to form a weighted covariance or correlation matrix. You can use PROC GLM to compute a meta-analyze of data that are the means from previous studies.

What happens if you "make up" a weight variable?

Analysts can (and do!) create weights arbitrarily based on "gut feelings." You might say, "I don't trust the value of this observation, so I'm going to downweight it." Suppose you assign Observation 1 twice as much weight as Observation 2 because you feel that Observation 1 is twice as "trustworthy." How does a multivariate procedure interpret those weights?

Examples of weighted analyses in SAS

In SAS, many procedures support a WEIGHT statement. The documentation for the procedure describes how the procedure incorporates weights. In addition to the previously mentioned procedures, many Base SAS procedures compute weighted descriptive statistics. For some examples of weighted statistical analyses in SAS and how to interpret the results, see the following articles: