The WEIGHT statement is supported in many SAS procedures. By convention, weights are positive values, so any observations that contain missing or nonpositive weights are excluded from the computation.

The result (not shown) is the same as reported by PROC MEANS. The SYMPUTX call creates a macro variable xbar that contains the value of the weighted mean for this example. This macro variable is used in the next section.

Weighted distributions are not always easy to visualize, and for this reason PROC UNIVARIATE does not support creating graphs of weighted analyses. However, weighted means have a simple physical interpretation.

You can use a bubble plot to depict the physical arrangement of masses for this example. Instead of an idealized point mass, the bubble plot enables you to represent each mass by a circle whose size is related to the mass. The SIZE= option for the BUBBLE statement in PROC SGPLOT determines the diameter of the bubbles, but mass is proportional to area (actually volume, but I'm going to use a 2-D picture), so I use the square root of the weight to determine the size of each bubble. This trick ensures that the area of the bubbles is proportional to the weight.

The following DATA step computes the square root of each weight and adds a horizontal coordinate, y=0. The call to PROC SGPLOT creates the bubble plot. The REFLINE statement displays the massless rod. A drop line is shown at the center of mass for this system; the horizontal position is the valueof the xbar macro variable that was previously computed. (You can imagine that the system is perfectly balanced on the tip of a needle.) Finally, the TEXT statement (added in SAS 9.4m2) displays the weight of each mass. For earlier releases of SAS, you can use the MARKERCHAR= option in the SCATTER statement to display the weights. 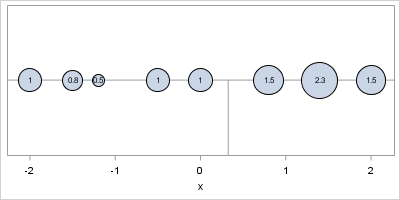