Every beginning SAS programmer learns the simple IF-THEN/ELSE statement for conditional processing in the SAS DATA step. The basic If-THEN statement handles two cases: if a condition is true, the program does one thing, otherwise the program does something else.

Of course, you can handle more cases by using multiple ELSE IF statements. I have seen SAS programs that contain contains dozens of ELSE clauses. Sometimes a long sequence of IF-THEN/ELSE statements is necessary, such as when you are testing complex logical conditions. 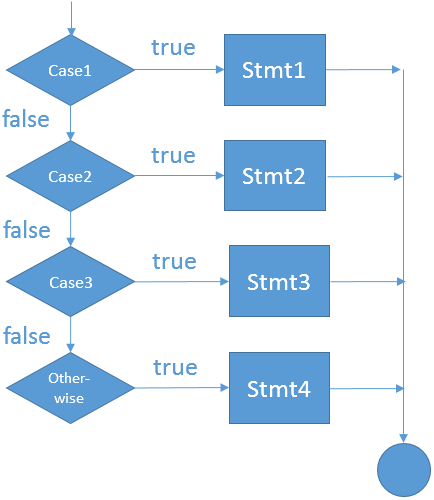 The following example uses the Sashelp.Heart data set, which contains data for 5,167 patients in a medical study. The Smoking_Status variable is a categorical variable that encodes the average number of cigarettes that each patient smokes per day. The following DATA step view implements a recoding scheme, which is sometimes the easiest way to force levels of a nominal variable to appear in a natural order during a SAS analysis.

The SELECT-WHEN statement is easy to read. You specify the name of a variable on the SELECT statement. You then list a sequence of WHEN statements. Each WHEN statement specifies a particular value for the variable. If the variable has that value, the program conditionally executes a statement, which in this example assigns a value to the Smoking_Cat variable.

Notice that you can use the OTHERWISE keyword to handle missing values, invalid data, or default actions.

You can also combine categories in a WHEN statement. For example, in a statistical analysis you might want to combine the 'Heavy' and 'Very Heavy' categories into a single group. In the WHEN statement you can specify multiple values in a comma-separated list:

If the WHEN condition is true, the program will execute one statement. This is the same rule that the IF-THEN statement follows. To execute more than one statement, use a DO-END block, which groups statements together:

I use the SELECT-WHEN statement as a "table lookup" when a program needs to branch according to the value of a single categorical variable that has three or more valid values. The basic SELECT-WHEN statement is not as flexible as the IF-THEN/ELSE statement, but, when applicable, it results in very clean and easy-to-read programs.

Some languages do not support a special switch statement, but instead require that you use IF-THEN/ELSE statements. Python and the SAS/IML language fall into this category.

There is an alternative syntax for the SELECT-WHEN statement that does not specify an expression in the SELECT statement. Instead, you specify logical conditions in the WHEN statements. This alternate syntax is essentially equivalent to an IF-THEN/ELSE statement, so which syntax you use is a matter of personal preference. Personally, I use SELECT-WHEN for branching on a known set of discrete values, and I use the IF-THEN/ELSE statement to handle more complex situations.