If you perform a weighted statistical analysis, it can be useful to produce a statistical graph that also incorporates the weights. This article shows how to construct and interpret a weighted histogram in SAS.

How to construct a weighted histogram

An example of a weighted histogram

The SAS documentation for the WEIGHT statement includes the following example. Twenty subjects estimate the diameter of an object that is 30 cm across. Some people are placed closer to the object than others. The researcher believes that the precision of the estimate is inversely proportional to the distance from the object. Therefore the researcher weights each subject's estimate by using the inverse distance.

The following DATA step creates the data, and PROC SGPLOT creates a weighted histogram of the data by using the WEIGHT= option on the HISTOGRAM option. (The WEIGHT= option was added in SAS 9.4M1.) 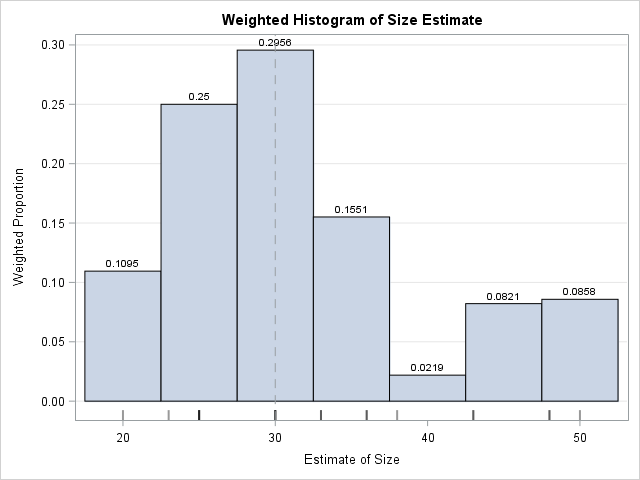 The weighted histogram is shown to the right. The data values are shown in the fringe plot beneath the histogram. The height of each bin is the sum of the weights of the observations in that bin. The dashed line represents the true diameter of the object. Most estimates are clustered around the true value, except for a small cluster of larger estimates. Notice that I use the SCALE=PROPORTION option to plot the weighted proportion of observations in each bin, although the default behavior (SCALE=PERCENT) would also be acceptable.

By the way, although PROC UNIVARIATE can produce weighted statistics, it does not create weighted graphics as of SAS 9.4M5. One reason is that the graphics statements (CDFPLOT, HISTOGRAM, QQPLOT, etc) not only create graphs but also fit distributions and produce goodness-of-fit statistics, and those analyses do not support weight variables.

A SAS/IML implementation of this algorithm requires only a few lines of code. A DATA step implementation that uses arrays is longer, but probably looks more familiar to many SAS programmers:

The computations from the DATA step match the data labels that appear on the weighted histogram in PROC SGPLOT.

In SAS, the HISTOGRAM statement in PROC SGPLOT supports the WEIGHT= option, which enables you to create a weighted histogram. A weighted histogram shows the weighted distribution of the data. If the histogram displays proportions (rather than raw counts), then the heights of the bars are the sum of the standardized weights of the observations within each bin. You can download the SAS program that computes the quantities in this article.

Have you ever plotted a weighted histogram? What was the context? Leave a comment.