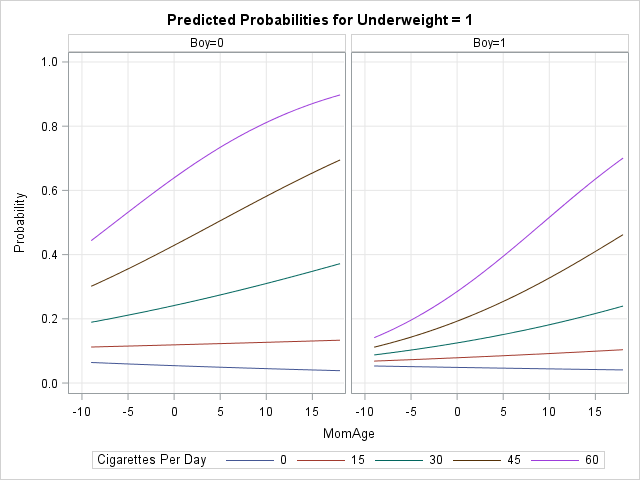 Graphs enable you to visualize how the predicted values for a regression model depend on the model effects. You can gain an intuitive understanding of a model by using the EFFECTPLOT statement in SAS to create graphs like the one shown at the top of this article.

Many SAS regression procedures automatically create ODS graphics for simple regression models. For more complex models (including interaction effects and link functions), you can use the EFFECTPLOT statement to construct effect plots. An effect plot shows the predicted response as a function of certain covariates while other covariates are held constant.

The following DATA step creates a SAS view that creates an indicator variable, Underweight, which has the value 1 if the baby's birth weight was less than 2500 grams and 0 otherwise:

A logistic model with a continuous-continuous interaction

To illustrate the capabilities of the EFFECTPLOT statement, the following statements use PROC LOGISTIC to model the probability of having an underweight boy baby (less than 2500 grams). The explanatory effects are MomAge, CigsPerDay, and the interaction effect between those two variables. The STORE statement creates an item store called logiModel. The item store is read by PROC PLM, which creates the effect plot: 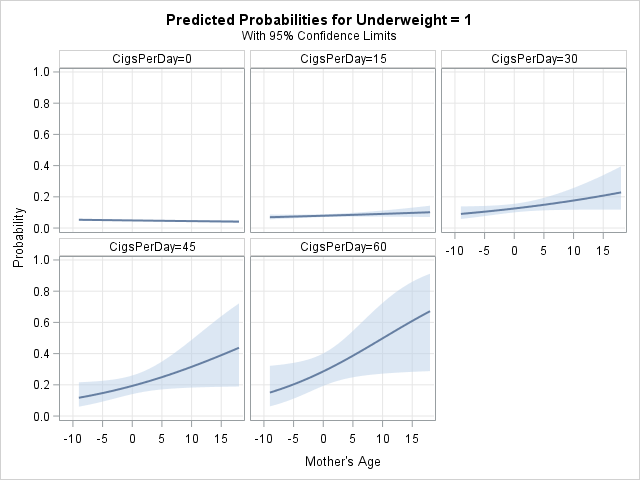 In this example, the output is a panel of plots that show the predicted probability of having an underweight boy baby as a function of the mother's relative age. (Remember: the age is centered at 27 years.) The panel shows slices of the continuous CigsPerDay variable, which enables you to see how the predicted response changes with increasing cigarette use.

An example of a slice plot is shown in the next section.

You can also use the EFFECTPLOT statement to create a contour plot of the predicted response as a function of the two continuous covariates, which is also shown in the next section.

A logistic model with categorical-continuous interactions

The effect plot is especially useful when visualizing complex models. When there are several independent variables and interactions, you can create multiple plots that show the predicted response at various levels of categorical or continuous variables. By default, covariates that do not appear in the plots are fixed at their mean level (for continuous variables) or their reference level (for classification variables).

The previous example used a WHERE clause to restrict the data to boy babies. Suppose that you want to include the gender of the baby as a covariate in the regression model. The following call to PROC LOGISTIC includes the main effects and two-way interactions between two continuous and one classification variable. The call to PROC PLM creates a panel of slice plots. Each slice plot shows predicted probability curves for slices of the CigsPerDay variable. The panels are determined by levels of the Boy variable, which is specified on the PLOTBY= option:

The output is shown in the graph at the top of this article. The right side of the panel shows the predicted probabilities for boys. These curves are similar to those in the previous example, but now they are overlaid on a single plot. The left side of the panel shows the corresponding curves for girl babies. In general, the model predicts that girl babies have a higher probability to be underweight (relative to boys) in smoking mothers. The effect is noticeable most dramatically for younger mothers.

If you want to add confidence limits for the predicted curves, you can use the CLM option: effectplot slicefit(...) / CLM.

You can specify the levels of a continuous variable that are used to slice or panel the curves. For example, most cigarettes come in a pack of 20, so the following EFFECTPLOT statement visually compares the effect of smoking for pregnant women who smoke zero, one, or two packs per day:

Notice that there are no parentheses around the argument to the SLICEBY= option. That is, you might expect the syntax to be sliceby=(CigsPerDay=0 20 40), but that syntax is not supported.

As mentioned previously, you can also create contour plots that display the predicted response as a function of two continuous variables. The following statements create two contour plots, one for boy babies and one for girls: 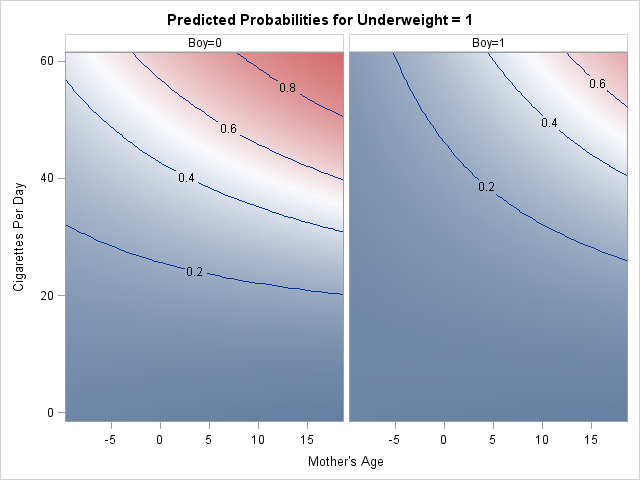 Summary of the EFFECTPLOT statement

The EFFECTPLOT statement enables you to create plots that visualize interaction effects in complex regression models. The EFFECTPLOT statement is a hidden gem in SAS/STAT software that deserves more recognition. The easiest way to create an effect plot is to use the STORE statement in a regression procedure to create an item store, then use PROC PLM to create effect plots. In that way, you only need to fit a model once, but you can create many plots that help you to understand the model.

You can overlay curves, create panels, and even create contour plots. Several other plot types are also possible. See the documentation for the EFFECTPLOT statement for the full syntax, options, and additional examples of how to create plots that visualize interactions in generalized linear models.