The following DATA step defines a small set of data. The goal of the analysis is to fit various regression models to Y as a function of X, and then evaluate each regression model on a second data set, which contains 200 evenly spaced X values.

The canonical example is fitting a linear regression by using PROC REG. You can use the OUTEST= option to write the parameter estimates to a data set. That data set, which is named RegOut in this example, becomes one of the two input data sets for PROC SCORE, as follows:

It is worth noting that the label for the MODEL statement in PROC REG is used by PROC SCORE to name the predicted variable. In this example, the YHat variable in the Pred data set contains the predicted values. If you do not specify a label on the MODEL statement, then a default name such as MODEL1 is used. For more information, see the documentation for the SCORE procedure. 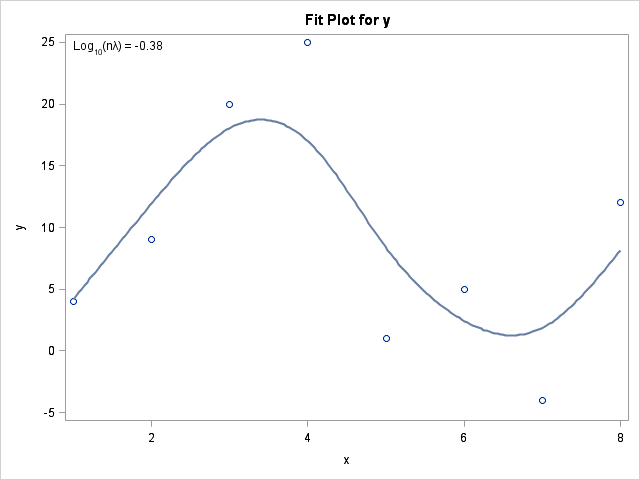 Other nonparametric procedures that support the SCORE statement include the ADAPTIVEREG procedure (new in SAS/STAT 12.1), the GAM procedure, and the LOESS procedure.

The STORE statement and the PLM procedure

Although the STORE statement and the PLM procedure were introduced in SAS/STAT 9.22 (way back in 2010), some SAS programmers are still not aware of these features. Briefly, the idea is that sometimes a scoring data set is not available when a model is fit, so the STORE statement saves all of the information needed to recreate and evaluate the model. The saved information can be read by the PLM procedure, which includes a SCORE statement, as well as many other capabilities. A good introduction to the PLM procedure is Tobias and Cai (2010), "Introducing PROC PLM and Postfitting Analysis for Very General Linear Models."

For this example, the GLM procedure is used to fit the data. Because of the shape of the previous thin-plate spline curve, a cubic model is fit. The STORE statement is used to save the model information in an item store named WORK.ScoreExample. (I've used the WORK libref, but use a permanent libref if you want the item store to persist across SAS sessions.) Many hours or days later, you can use the PLM procedure to evaluate the model on a new set of data, as shown in the following statements:

For this example, the predicted values are in a variable called P_y in the Pred data set. The CODE statement is supported by many predictive modeling procedures, such as the GENMOD, GLIMMIX, GLM, GLMSELECT, LOGISTIC, MIXED, PLM, and REG procedures in SAS/STAT software. In addition, the CODE statement is supported by the HPLOGISTIC and HPREG procedures in SAS High-Performance Analytics software.

In summary, there are many ways to score SAS regression models. For PROC REG and linear models with an explicit design matrix, use the SCORE procedure. For nonparametric models, use the SCORE statement. For scoring data sets long after a model is fit, use the STORE statement and the PLM procedure. For scoring inside the DATA step, use the CODE statement. For regression procedures that do not support these options (such as PROC TRANSREG) use the missing value trick from my last post.

Did I leave anything out? What is your favorite technique to score a regression model? Leave a comment.