There are many ways to explore the interactions in a regression model, but this article describes how to use the EFFECTPLOT statement in SAS. The emphasis is on creating a plot that shows how the response depends on two regressors that might interact. Depending on the type of regressors (continuous or categorical), you can create the following plots:

This article uses the Sashelp.Cars data to demonstrate the visualizations. The response variable is MPG_City, which is the average miles per gallon for each vehicle during city driving. The regressors are Weight (mass of the vehicle, in pounds), Horsepower, Origin (place of manufacture: 'Asia', 'Europe', or 'USA'), and Type of vehicle. For simplicity, the example uses only four values of the Type variable: 'SUV', 'Sedan', 'Sports', or 'Wagon'.

Suppose you want to visualize the interaction between two continuous regressors. The following call to PROC GLM creates a contour plot automatically. It also creates an item store which saves information about the model. 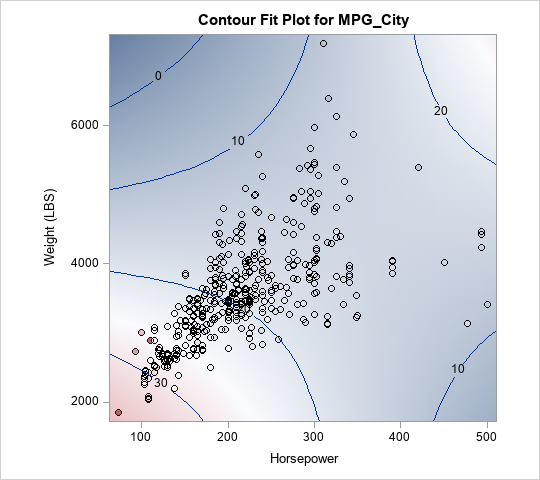 This fact is easier to see if you "slice" the contour plot at low, medium, and high values of the Weight variable. You can use PROC PLM to create a SLICEFIT plot. By default, the "slicing" variable is fixed at five values: its minimum value, first quartile value, median value, third quartile value, and maximum value. 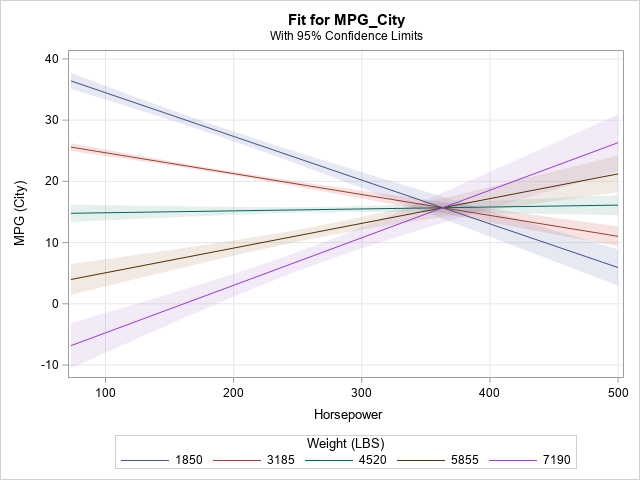 Because the slopes of the lines depend on the value of Weight, the graph indicates an interaction.

As shown in the previous section, the SLICEFIT statement uses quantiles to fix the value of the second continuous regressor. When I read Jacob Long's web page, I noticed that his functions slice the second regressor at its mean and one standard deviation away from the mean (in both directions). In SAS, you can specify arbitrary values by using the SLICEBY= option. The following statements use PROC MEANS to compute the mean and standard deviation of the Weight variable, then use those values to specify slicing values for the Weight variable: 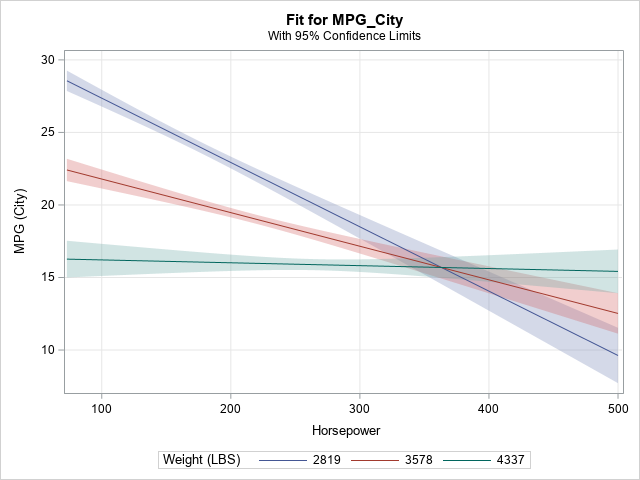 The graph is similar to the previous graph and is not shown.

Interactions between a continuous and a categorical regressor

If one of the regressors is categorical and the other is continuous, it is easy to visualize the interaction because you can plot the predicted response versus the continuous regressor for each level of the categorical regressor. In fact, this plot is created automatically by many SAS procedures, so often you don't need to use the EFFECTPLOT statement. For example, the following call to PROC GLM overlays three regression curves on a scatter plot of the data: 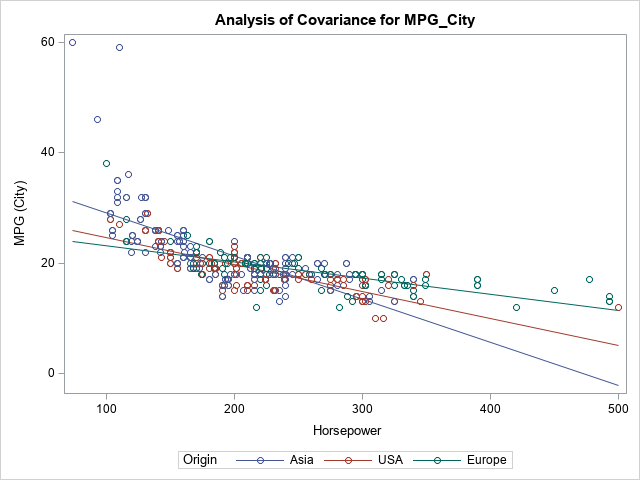 The slopes of the lines change with the levels of the Origin variable, so there appears to be an interaction effect between those two regressors.

The GLM procedure has access to the original data, so the lines are overlaid on a scatter plot. If you create the same plot in PROC PLM, you obtain the lines (and, optionally, confidence bands), but the plot does not include a scatter plot because the data are not part of the saved item store. For completeness, the following call to PROC PLM creates a similar visualization of the Horsepower-Origin interaction:

I have previously written about how to create an "interaction plot" for two categorical predictors. Many SAS procedures produce this kind of plot automatically. You can use the EFFECTPLOT BOX or EFFECTPLOT INTERACTION statement inside many regression procedures. Alternatively, you can call PROC PLM and create an interaction plot from an item store. Again, the main difference is that the regression procedures can overlay observed data values, whereas PROC PLM visualizes only the model, not the data.

The following example creates a model that has two categorical variables. By default, PROC GLM creates an interaction plot and overlays the observed data values: 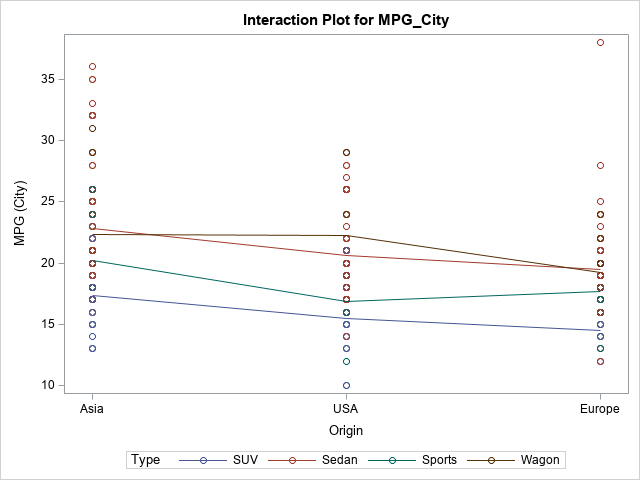 As mentioned, you can create the same plot (without the data markers) by using PROC PLM. If you request confidence intervals, you get a slightly different graph. You can choose whether or not to connect the means of the response for each level. The following statements create a plot for which the means are not connected: 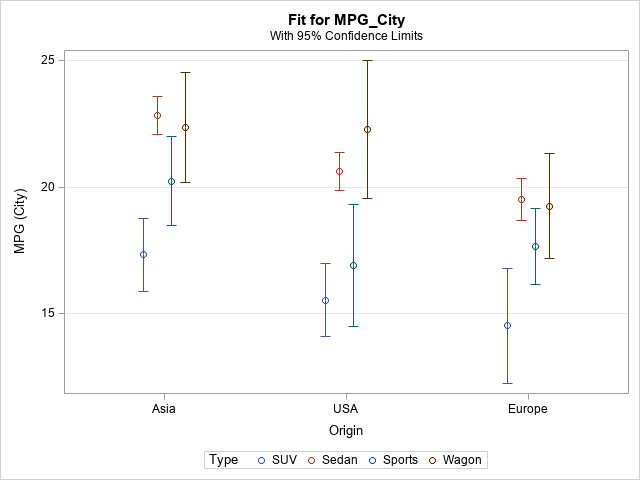 Lastly, you can use the EFFECTPLOT BOX statement in regression procedures. The information is the same as for the "interaction plot," but box plots are used to show the observed distribution of the response for each level of the first categorical regressor. 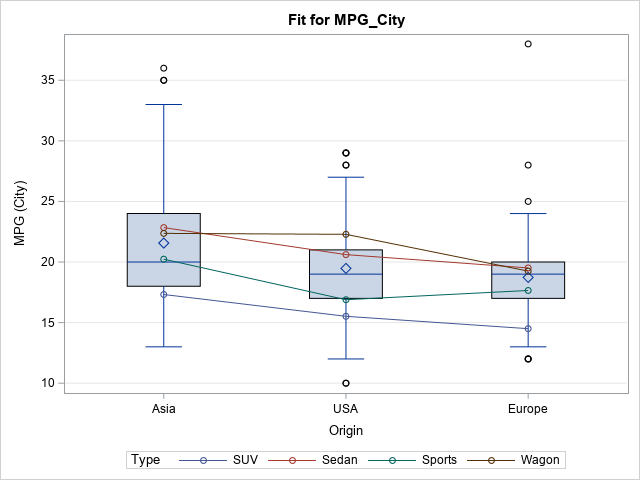