When you fit a regression model, it is useful to check diagnostic plots to assess the quality of the fit. SAS, like most statistical software, makes it easy to generate regression diagnostics plots. Most SAS regression procedures support the PLOTS= option, which you can use to generate a panel of diagnostic plots. Some procedures (most notably PROC REG and PROC LOGISTIC) support dozens of graphs that help you to evaluate the fit of the model, to determine whether the data satisfy various assumptions, and to identify outliers and high-leverage points. Diagnostic plots are most useful when the size of the data is not too large, such as less than 5,000 observations.

This article discusses the eight plots in the DiagnosticsPanel plot, which is produced by several SAS regression procedures. To make the discussion as simple as possible, this article uses PROC REG to fit an ordinary least squares model to the data.

The eight plots can be classified into five groups:

This article also includes graphs of the residuals plotted against the explanatory variables.

Create a model that does not fit the data

This section creates a regression model that (intentionally) does NOT fit the data. The data are 75 locations and measurements of the thickness of a coal seam. A naive model might attempt to fit the thickness of the coal seam as a linear function of the East-West position (the East variable) and the South-North position (the North variable). However, even a cursory glance at the data (see Figure 2 in the documentation for the VARIOGRAM procedure) indicates that the thickness is not linear in the North-South direction, so the following DATA step creates a quadratic effect. The subsequent call to PROC REG fits the model to the data and uses the PLOT= option to create a panel of diagnostic plots. By default, PROC REG creates a diagnostic panel and a panel of residual plots. If you want to add a loess smoother to the residual plots, you can use the SMOOTH suboption to the RESIDUALPLOT option, as follows: 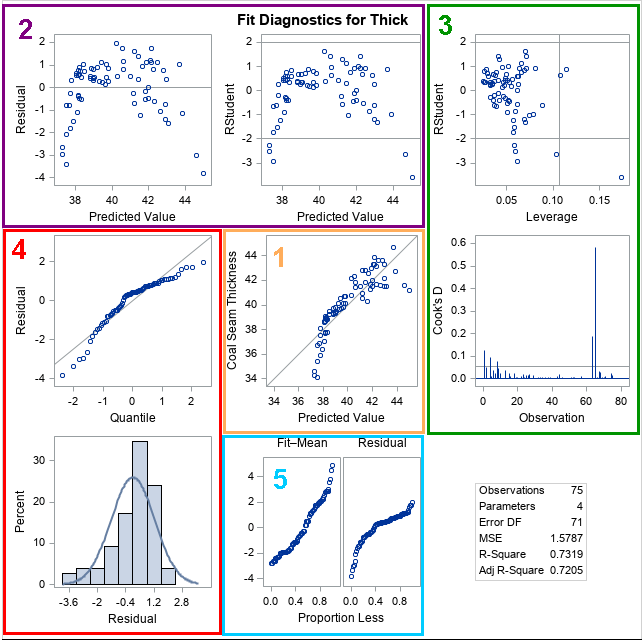 The panel of diagnostic plots is shown. The panel of residual plots is shown later in this article. To guide the discussion, I have overlaid colored boxes around certain graphs. You can look at the graphs in any order, but I tend to look at them in the order indicated by the numbers in the panel.

1. The predicted versus observed response

For this model, the cloud of markers is not close to the diagonal, which indicates that the model does not fit the data. You can see several markers that are far below the diagonal. These observations will have large negative residuals, as shown in the next section.

2. The residual and studentized residual plots

Two residual plots in the first row (purple box) show the raw residuals and the (externally) studentized residuals for the observations. 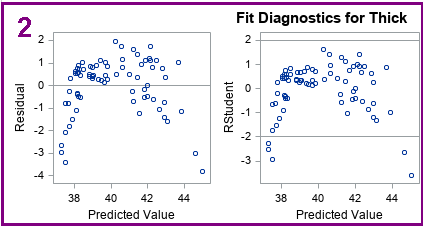 The first graph is a plot of the raw residuals versus the predicted values. Ideally, the graph should not show any pattern. Rather, it should look like a set of independent and identically distributed random variables. You can use this graph for several purposes:

The two graphs in the upper right box (green) enable you to investigate outliers, influential observations, and high-leverage points. One graph plots the studentized residuals versus the leverage value for each observation. As mentioned previously, the observations whose studentized residuals exceed ±2 can be considered outliers. The leverage statistic attempts to identify influential observations. The leverage statistic indicates how far an observation is from the centroid of the data in the space of the explanatory variables. Observations far from the centroid are potentially influential in fitting the regression model. "Influential" means that deleting that observation can result in a relatively large change in the parameter estimates.

The needle plot of Cook's D second graph (second row, last column) is another plot that indicates influential observations. Needles that are higher than the horizontal line are considered influential.

A subsequent article includes details about how to use the Cook's D plot to identify influential observations in your data. 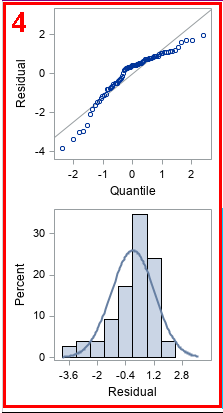 For the Q-Q plot of these residuals, the markers are below the diagonal line at both ends of the pattern. That means that the distribution of residuals is negatively skewed: it has a long tail on the left and a short tail on the right. This is confirmed by looking at the histogram of residuals. For this model, the residuals are not normal; the overlay of the normal density curve does not fit the histogram well. 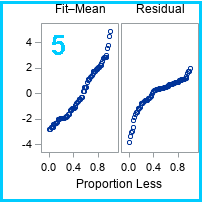 The last graph (blue box) is the residual-fit spread plot, which I have covered in a separate article. For these data, you can conclude that the three explanatory variables account for a significant portion of the variation in the model.

Lastly, the PLOTS=RESIDUALPLOT(SMOOTH) option on the PROC REG statement creates a panel that includes the residuals plotted against the value of each explanatory variable. The SMOOTH suboption overlays a loess smoother, which is often helpful in determining whether the residuals contain a signal or are randomly distributed. The panel for these data and model is shown below: 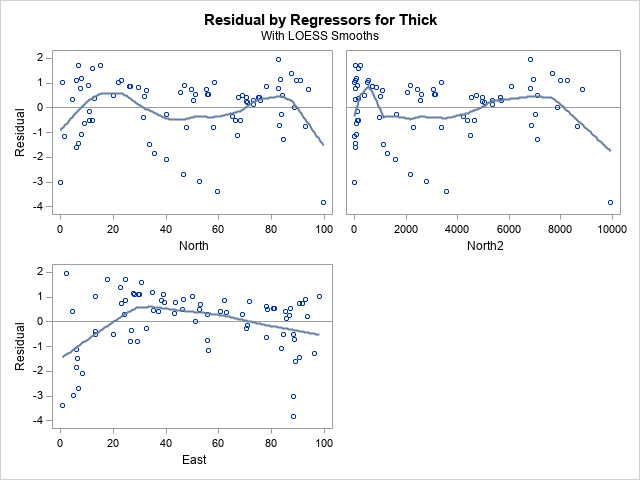 The residuals plotted again the East variable shows a systematic pattern. It indicates that the model does not adequately capture the dependence of the response on the East variable. An analyst who looks at this plot might decide to add a quadratic effect in the East direction, or perhaps to model a fully quadratic response surface by including the North*East interaction term.

A subsequent article describes how to use the diagnostic plots to identify influential observations.