I had not heard of the Theil-Sen robust regression method until recently, perhaps because it applies only to one-variable regression. The Wikipedia article about the Theil-Sen estimator states that the method is "the most popular nonparametric technique for estimating a linear trend" in the applied sciences due to its "simplicity in computation, ... robustness to outliers," and "[limited assumptions]regarding measurement errors." 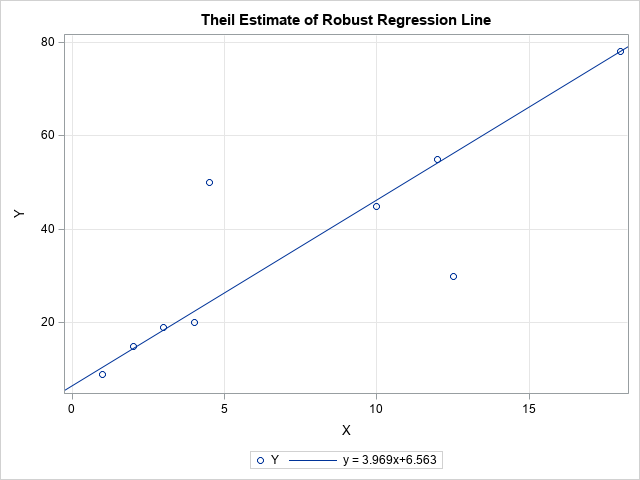 Implement the Theil-Sen estimator in SAS

You can easily implement Theil-Sen regression in SAS/IML, as follows:

The following SAS/IML program implements this algorithm. The program is very compact (six statements) because it is vectorized. There are no explicit loops.

As stated earlier, the Theil-Sen estimate has a slope of 3.97. That value is the median of the slopes among the 36 line segments that connect pairs of points. The following graphs display the 36 line segments between pairs of points and a histogram of the distribution of the slopes. The histogram shows that the value 3.97 is the median value of the distribution of slopes. 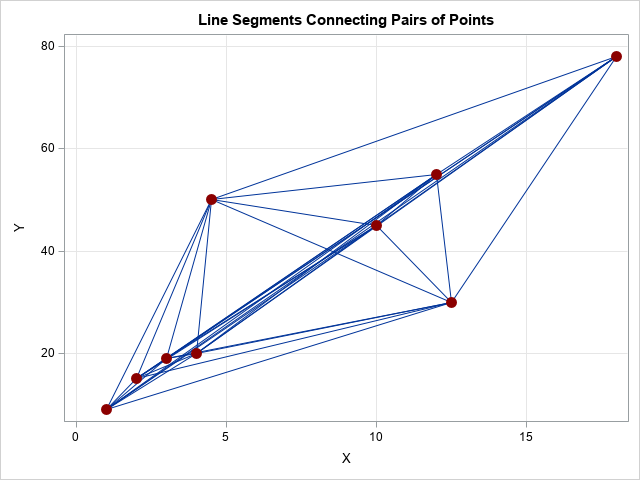 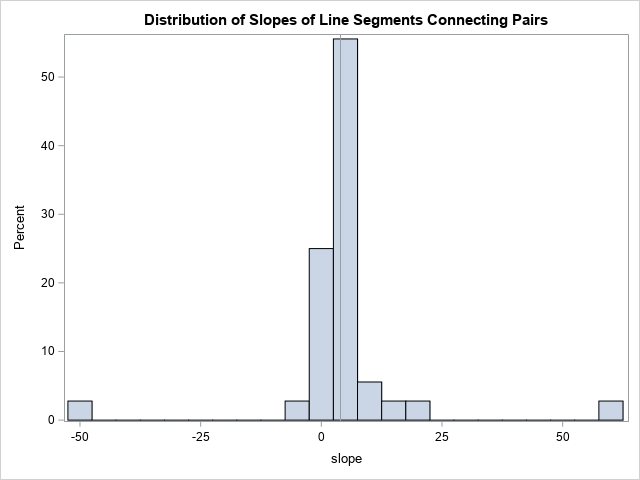 The observant reader might object that the slopes of the line segments will be undefined if any of the data have identical X values. One way to deal with that situation is to replace the undefined slopes by large positive or negative values, depending on the sign of the difference between the Y values. Since the median is a robust estimator, adding a few high and low values will not affect the computation of the median slope. Alternatively, Sen (1968) proved that you can omit the pairs that have identical X values and still obtain an unbiased estimate. In the following SAS/IML program, I modified the X values of the two outliers so that only seven of the nine X values are unique. The LOC function finds all pairs that have different X values, and only those pairs are used to compute the robust regression estimates.

A function to compute the Theil-Sen estimator 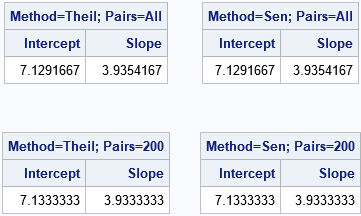 For these data, the estimates are the same whether you exclude pairs of points that have identical X coordinates or whether you replace the undefined slopes with large values. For this small data set, there is no reason to use the randomly chosen pairs of points, but that syntax is shown for completeness. Of course, if you run the analysis with a different random number seed, you will get a different estimate.

You can download the SAS program that creates the analysis and graphs in this article.

Although Theil published the main ideas for this method in 1950, it contains many of the features of modern robust statistical estimates. Specifically, a theme in modern robust statistics is to exhaustively or randomly choose many small subsets of the data. You compute a (classical) estimate on each subset and then use the many estimates to obtain a robust estimate. I did not realize that Theil had introduced these basic ideas almost seventy years ago!

Theil and Sen also included confidence intervals for the estimates, but I have not included them in this brief article.