Recently, I was asked whether SAS can perform a principal component analysis (PCA) that is robust to the presence of outliers in the data. A PCA requires a data matrix, an estimate for the center of the data, and an estimate for the variance/covariance of the variables. Classically, these estimates are the mean and the Pearson covariance matrix, respectively, but if you replace the classical estimates by robust estimates, you can obtain a robust PCA.

This article shows how to implement a classical (non-robust) PCA by using the SAS/IML language and how to modify that classical analysis to create a robust PCA.

The PRINCOMP procedure in SAS computes a classical principal component analysis. You can analyze the correlation matrix (the default) or the covariance matrix of the variables (the COV option). You can create scree plots, pattern plots, and score plots automatically by using ODS graphics. If you want to apply rotations to the factor loadings, you can use the FACTOR procedure.

Let's use PROC PRINCOMP perform a simple PCA. The PROC PRINCOMP results will be the basis of comparison when we implement the PCA in PROC IML. The following example is taken from the Getting Started example in the PROC PRINCOMP documentation. The procedure analyzes seven crime rates for the 50 US states in 1977, based on the correlation matrix. (The documentation provides the data.)

Assume that the data consists of n observations and p variables and assume all values are nonmissing. If you are comfortable with multivariate analysis, a principal component analysis is straightforward: the principal components are the eigenvectors of a covariance or correlation matrix, and the scores are the projection of the centered data onto the eigenvector basis. However, if it has been a few years since you studied PCA, Abdi and Williams (2010) provides a nice overview of the mathematics. The following matrix computations implement the classical PCA in the SAS/IML language: 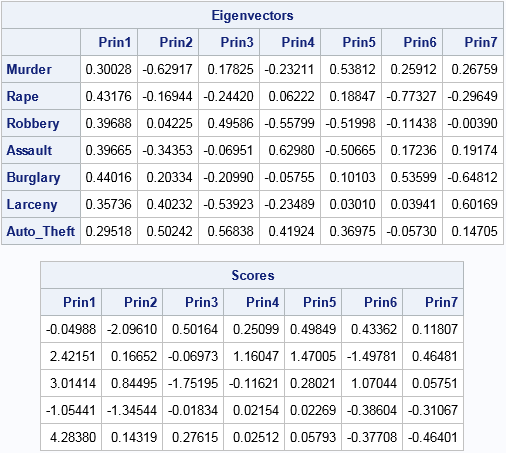 The principal components (eigenvectors) and scores for these data are identical to the same quantities that were produced by PROC PRINCOMP. In the preceding program I could have directly computed R = corr(X) and scale = std(X), but I generated those quantities from the covariance matrix because that is the approach used in the next section, which computes a robust PCA.

If you want to compute the PCA from the covariance matrix, you would use S in the EIGEN call, and define B = X - mean(X) as the centered (but not scaled) data matrix.

This section is based on a similar robust PCA computation in Wicklin (2010). The main idea behind a robust PCA is that if there are outliers in the data, the covariance matrix will be unduly influenced by those observations. Therefore you should use a robust estimate of the covariance matrix for the eigenvector computation. Also, the arithmetic mean is unduly influenced by the outliers, so you should center the data by using a robust estimate of center before you form the scores.

SAS/IML software provides the MCD subroutine for computing robust covariance matrices and robust estimates of location. If you replace the COV and MEAN functions in the previous section by a call to the MCD subroutine, you obtain a robust PCA, as follows:

If you want to compute the robust PCA from the covariance matrix, you would use RobCov in the EIGEN call, and define B = X - RobLoc as the centered (but not scaled) data matrix.

Comparing the classical and robust PCA 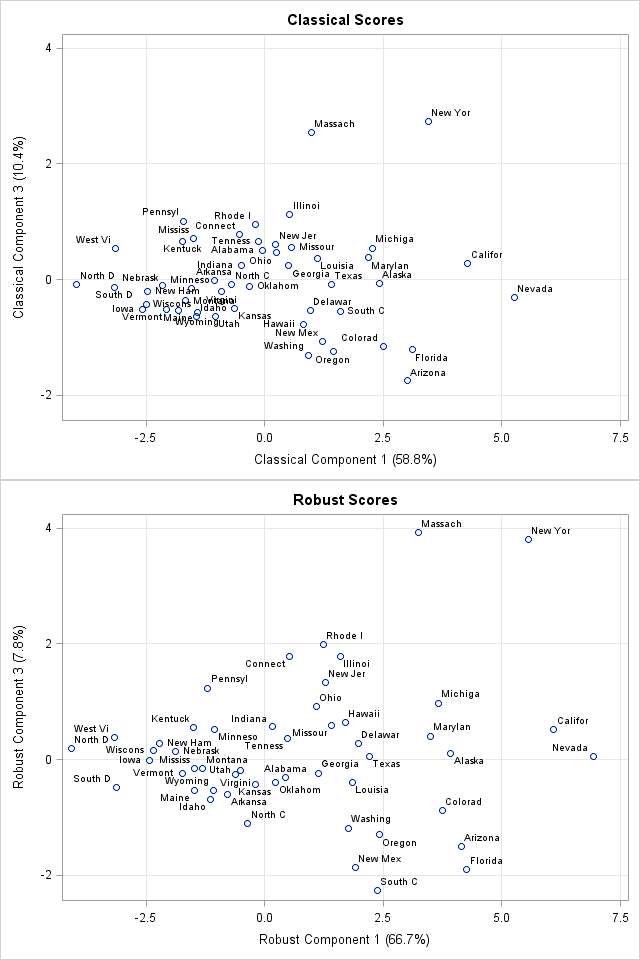 You can write the robust scores to a SAS data set and used the SGPLOT procedure to plot the scores of the classical and robust PCA on the same scale. The first and third component scores are shown to the right, with abbreviated state names serving as labels for the markers. (Click to enlarge.) You can see that the robust first-component scores for California and Nevada are separated from the other states, which makes them outliers in that dimension. (The first principal component measures overall crime rate.) The robust third-component scores for New York and Massachusetts are also well-separated and are outliers for the third component. (The third principal component appears to contrast murder with rape and auto theft with other theft.)

You can download the SAS program that computes the analysis and creates the graphs.

As discussed in Hubert, Rousseeuw, and Branden (2005), the MCD algorithm is most useful for 100 or fewer variables. They describe an alternative computation that can support a robust PCA in higher dimensions.