In two previous blog posts I worked through examples in the survey article, "Robust statistics for outlier detection," by Peter Rousseeuw and Mia Hubert. Robust estimates of location in a univariate setting are well-known, with the median statistic being the classical example. Robust estimates of scale are less well-known, with the best known example being interquartile range (IQR), but a more modern statistic being the MAD function.

For multivariate data, the classical (nonrobust) estimate of location is the vector mean, c, which is simply the vector whose ith component is the mean of the ith variable. The classical (nonrobust) estimate of scatter is the covariance matrix. An outlier is defined as an observation whose Mahalanobis distance from c is greater than some cutoff value. As in the univariate case, both classical estimators are sensitive to outliers in the data. Consequently, statisticians have created robust estimates of the center and the scatter (covariance) matrix.

A popular algorithm that computes a robust center and scatter of multivariate data is known as the Minimum Covariance Determinant (MCD) algorithm. The main idea is due to Rousseeuw (1985), but the algorithm that is commonly used was developed by Rousseeuw and Van Driessen (1999). The MCD algorithm works by sampling h observations from the data over and over again, where h is typically in the range n/2 < h < 3n/4. The "winning" subset is the h points whose covariance matrix has the smallest determinant. Points far from the center of this subset are excluded, and the center and scatter of the remaining points are used as the robust estimates of location and scatter.

This Monte Carlo approach works very well in practice, but it does have the unfortunate property that it is not deterministic: a different random number seed could result in different robust estimates. Recently, Hubert, Rousseeuw, and Verdonck (2010) have published a deterministic algorithm for the MCD.

The SAS/IML language includes the MCD function for robust estimation of multivariate location and scatter. The following matrix defines a data matrix from Brownlee (1965) that correspond to certain measurements taken on 21 consecutive days. The points are shown in a three-dimensional scatter plot that was created in SAS/IML Studio. 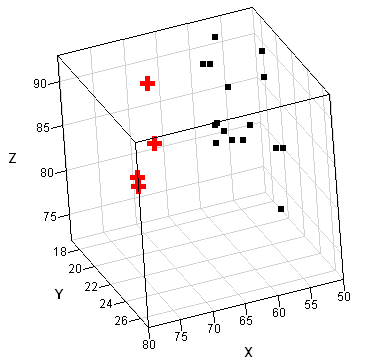 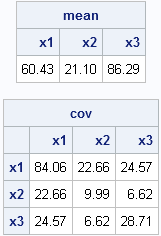 Most researchers think that observations 1, 2, 3, and 21 are outliers, with others including observation 2 as an outlier. (These points are shown as red crosses in the scatter plot.) The following statement runs the MCD algorithm on these data and prints the robust estimates: 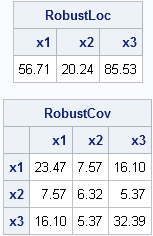 If you take these robust estimates and plug them into the classical Mahalanobis distance formula, the corresponding distance is known as the robust distance. It measures the distance between each observation and the estimate of the robust center by using a metric that depends on the robust scatter matrix. The MCD subroutine returns distance information in a matrix that I've called DIST (the third argument). The first row of DIST is the classical Mahalanobis distance. The second row is the robust distance, which is based on the robust estimates of location and scatter. The third row is an indicator variable with the value 1 if an observation is closer to the robust center than some cutoff value, and 0 otherwise. Consequently, the following statements find the outliers.

The MCD algorithm has determined that observations 1, 2, 3, and 21 are outliers.

In a recent paper, Hardin and Rocke (2005) propose a different criterion, based on the distribution of robust distances.

In a regression context, the word "outlier" is reserved for an observation for which the value of the response variable is far from the predicted value. In other words, in regression an outlier means "far away (from the model) in the Y direction." In contrast, the ROBUSTREG procedure uses the MCD algorithm to identify influential observations in the space of explanatory (that is, X) variables. These are also called high-leverage points. They are observations that are far from the center of the X variables. High-leverage points are very influential in ordinary least squares regression, and that is why it is important to identify them.

To generate the MCD estimates, specify the DIAGNOSTICS and the LEVERAGE(MCDINFO) options on the MODEL statement, as shown in the following statements: 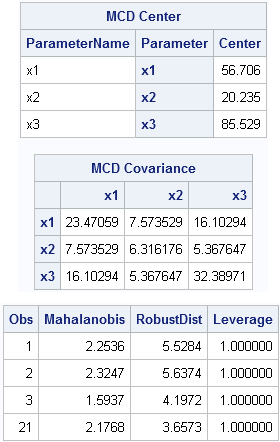 The robust estimates of location and scatter are the same, as are the robust distances. The "leverage" variable is an indicator variable that tells you which observations are far from the center of the explanatory variables. They are multivariate "outliers" in the the space of the X variables, although they are not necessarily outliers for the response (Y) variable.