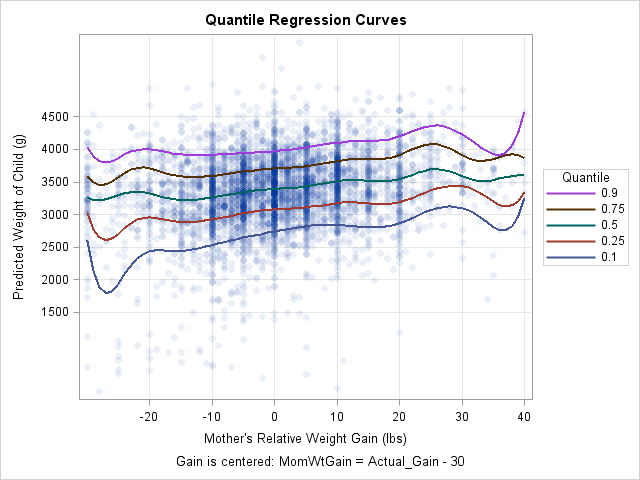 This article shows how to score (evaluate) a quantile regression model on new data. SAS supports several procedures for quantile regression, including the QUANTREG, QUANTSELECT, and HPQUANTSELECT procedures. The first two procedures do not support any of the modern methods for scoring regression models, so you must use the "missing value trick" to score the model. (HPQUANTSELECT supports the CODE statement for scoring.) You can use this technique to construct a "sliced fit plot" that visualizes the model, as shown to the right. (Click to enlarge.)

The easy way to create a fit plot

The following DATA step creates the example data as a subset of the Sashelp.BWeight data set, which contains information about the weights of live births in the US in 1997 and information about the mother during pregnancy. The following call to PROC QUANTREG models the conditional quantiles of the baby's weight as a function of the mother's weight gain. The weight gain is centered according to the formula MomWtGain = "Actual Gain" – 30 pounds. Because the quantiles might depend nonlinearly on the mother's weight gain, the EFFECT statement generates a spline basis for the independent variable. The resulting model can flexibly fit a wide range of shapes.

Although this article shows how to create a fit plot, you can also get a fit plot directly from PROC QUANTREG. As shown below, the PLOT=FITPLOT option creates a fit plot when the model contains one continuous independent variable. 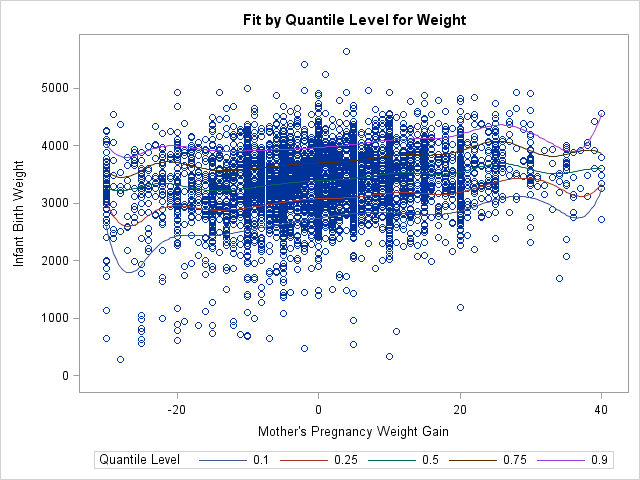 The graph enables you to visualize curves that predict the 10th, 25th, 50th, 75th, and 90th percentiles of the baby's weight based on the mother's weight gain during pregnancy. Because the data contains 5,000 observations, the fit plot suffers from overplotting and the curves are hard to see. You can use the PLOT=FITPLOT(NODATA) option to exclude the data from the plot, thus showing the quantile curves more clearly.

Score a SAS procedure by using the missing value trick

Although PROC QUANTREG can produce a fit plot when there is one continuous regressor, it does not support the EFFECTPLOT statement so you have to create more complicated graphs manually. To create a graph that shows the predicted values, you need to score the model on a new set of independent values. To use the missing value trick, do the following:

This general technique is implemented by using the following SAS statements. The scoring data consists of evenly spaced values of the MomWtGain variable. The binary indicator variable is named ScoreData. The result of these computations is a data set named QRegOut that contains a variable named Pred that contains the predicted values for each observation in the scoring data.

This technique can be used for any SAS regression procedure. In this case, the COLUMNWISE option specifies that the output data set should be written in "long form": A QUANTILE variable specifies the quantile and the variable PRED contains the predicted values for each quantile. If you omit the COLUMNWISE option, the output data is in "wide form": The predicted values for the five quantiles are contained in the variables Pred1, Pred2, ..., Pred5.

You can use the predicted values of the scoring data to construct a fit plot. You merely need to sort the data by any categorical variables and by the X variable (in this case, MomWtGain). You can then plot the predicted curves. If desired, you can also append the original data and the predicted values and create a graph that overlays the data and predicted curves. You can use transparency to address the overplotting issue and also modify other features of the fit plot, such as the title, axes labels, tick positions, and so forth:

The fit plot is shown at the top of this article.

In summary, this article shows how to use the missing value trick to evaluate a regression model in SAS. You can use this technique for any regression procedure, although newer procedures often support syntax that makes it easier to score a model.