One of first "tricks" that I learned when I started working at SAS was how to score regression data in procedures that do not support the SCORE statement. I think almost every SAS statistical programmer learns this trick early in their career, usually from a more experienced SAS programmer. The trick is used in examples in the SAS/STAT User's Guide and on discussion forums, but it is not often explicitly discussed, probably because it is so well known. However,I had to search the internet for a while before I found a SUGI paper that describes the trick. In an effort to assist new SAS programmers, here is an explanation of how to score regression models by using the "missing value trick," which is also called the "missing response trick" or the "missing dependent variable trick."

The trick relies on two features of SAS software: 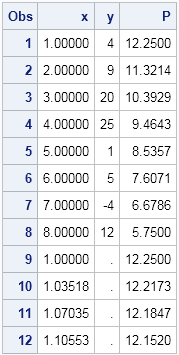 The table shows that the scoring data, which begins in row 9, contains predicted values as desired.

The advantage of this technique is that it is easy to implement. A disadvantage is this technique makes two extra copies of the scoring data, which might require a lot of disk space if the scoring data set is huge. A second disadvantage is that the trick increases the number of observations that the regression procedure must read. In the example, there are only eight observations in the original data, but the REG procedure has to read and write 208 observations.

There are other ways to evaluate a regression model, including using a SCORE statement, the SCORE procedure, and the relatively new PLM procedure. I will discuss these alternative methods in a future blog post.

I'm interested in hearing about when you first learned the missing response trick? Who did you learn it from? Do you still use it, or do you now use a more modern technique? Leave a comment.