When someone refers to the correlation between two variables, they are probably referring to the Pearson correlation, which is the standard statistic that is taught in elementary statistics courses. Elementary courses do not usually mention that there are other measures of correlation.

PROC CORR in SAS supports several measures of correlation, including the Pearson and Spearman correlations. For data without outliers, the two measures are often similar. For example, the following call to PROC CORR computes the Spearman rank correlation between three variables in the Sashelp.Class data set: 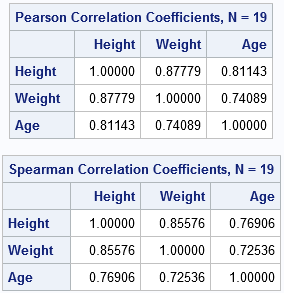 The resulting table of correlations is the same as in the previous section and is not shown. Although PROC CORR can compute the rank correlation directly, it is comforting that these two steps produce the same answer. Furthermore, this two-step method can be useful if you decide to implement a rank-based statistic that is not produced by any SAS procedure. This two-step method is also the way to compute the Spearman correlation of character ordinal variables because PROC CORR does not analyze character variables. However, PROC RANK supports both character and numeric variables.

In the SAS/IML language, the CORR function computes the Spearman rank correlation directly, as follows. The results are the same as the results from PROC CORR, and are not shown.

If you ever need to compute a rank-based statistic manually, you can also use the RANKTIE function to compute the ranks of the elements in a numerical vector, such as
ranktie(X[ ,1], "Mean");