Understanding multivariate statistics requires mastery of high-dimensional geometry and concepts in linear algebra such as matrix factorizations, basis vectors, and linear subspaces. Graphs can help to summarize what a multivariate analysis is telling us about the data. This article looks at four graphs that are often part of a principal component analysis of multivariate data. The four plots are the scree plot, the profile plot, the score plot, and the pattern plot.

The graphs are shown for a principal component analysis of the 150 flowers in the Fisher iris data set. In SAS, you can create the graphs by using PROC PRINCOMP. By default, the scatter plots that display markers also label the markers by using an ID variable (such as name, state, patient ID, ...) or by using the observation number if you do not specify an ID variable. To suppress the labels, you can create an ID variable that contains a blank string, as follows:

The following statements create the four plots as part of a principal component analysis. The data are the measurements (in millimeters) of length and width of the sepal and petal for 150 iris flowers:

Note that the principal components (which are based on eigenvectors of the correlation matrix) are not unique. If v is a PC vector, then so is -v. If you compare PCs from two different software packages, you might notice that a PC from one package is the negative of the same PC from another package.

You could present this table graphically by creating a "loadings plot," as shown in the last section of this article.

Recall that the main idea behind principal component analysis (PCA) is that most of the variance in high-dimensional data can be captured in a lower-dimensional subspace that is spanned by the first few principal components. You can therefore to "reduce the dimension" by choosing a small number of principal components to retain. But how many PCs should you retain? The scree plot is a line plot of the eigenvalues of the correlation matrix, ordered from largest to smallest. (If you use the COV option, it is a plot of the eigenvalues of the covariance matrix.) 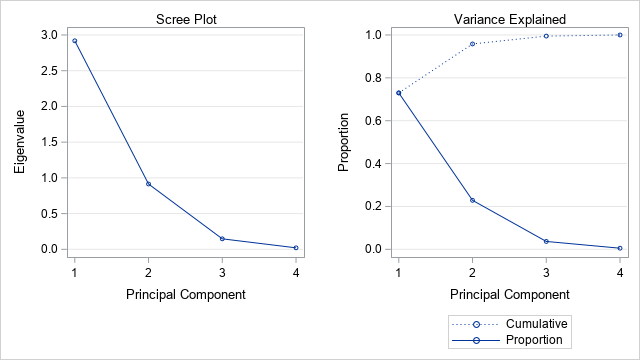 You can use the scree plot as a graphical tool to help you choose how many PCs to retain. In the scree plot for the iris data, you can see (on the "Variance Explained" plot) that the first two eigenvalues explain about 96% of the variance in the four-dimensional data. This suggests that you should retain the first two PCs, and that a projection of the data onto the first to PCs will give you a good way to visualize the data in a low-dimensional linear subspace. 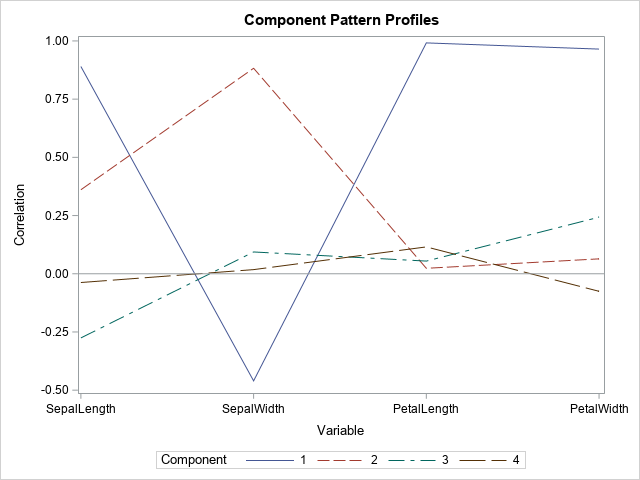 The profile plot reveals the following facts about the PCs:

The component pattern plot shows all pairwise correlations at a glance. However, if you are analyzing many variables (say 10 or more), the plot will become very crowded and hard to read. In that situation, the pattern plots are easier to read, as shown in the next section. 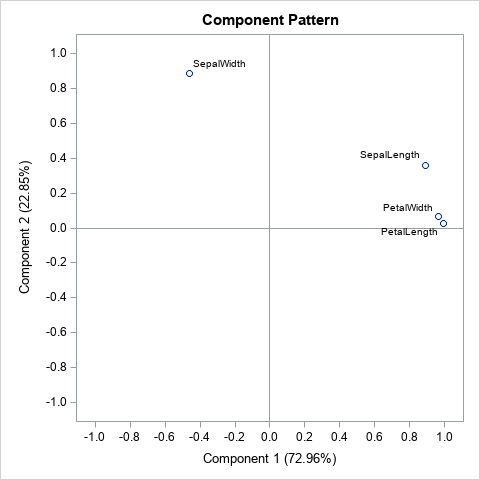 The output from PROC PRINCOMP includes six "component pattern" plots, which show the correlations between the principal components and the original variables. Because there are four PCs, a component pattern plot is created for each pairwise combination of PCs: (PC1, PC2), (PC1, PC3), (PC1, PC4), (PC2, PC3), (PC2, PC4), and (PC3, PC4). In general, if there are k principal components, there are N(N-1)/2 pairwise combinations of PCs.

Six graphs require a lot of space for what is essentially a grid of sixteen numbers. If you want to see the actual correlations in a table, you can call PROC CORR on the OUT= data set, as follows:

If you know you want to keep only two PCs, you can use the N=2 option on the PROC PRINCOMP statement, which will reduce the number of graphs that are created.

The score plots indicate the projection of the data onto the span of the principal components. As in the previous section, this four-dimensional example results in six score plots, one for each pairwise combination of PCs. You will get different plots if you create PCs for the covariance matrix (the COV option) as opposed to the correlation matrix (the default). Similarly, if you standardize the PCs (the STD option) or do not standardize them (the default), the corresponding score plot will be different.

The score plot for the first two PCs is shown. Notice that it uses equal scales for the axes. The graph shows that the first principal component separates the data into two clusters. The left cluster contains the flower from the Iris setosa species. You can see a few outliers, such as one setosa flower whose second PC score (about -2.5) is much smaller than the other setosa flowers.

ODS graphics provide an easy way to generate a quick look at the data. However, if you want to more control over the graphs, it is often simplest to output the results to a SAS data set and customize the plots by hand. You can use the OUT= option to write the PCs to a data set. The following call to PROC SGPLOT creates the same score plot but colors the markers by the Species variable and adds a grid of reference lines. 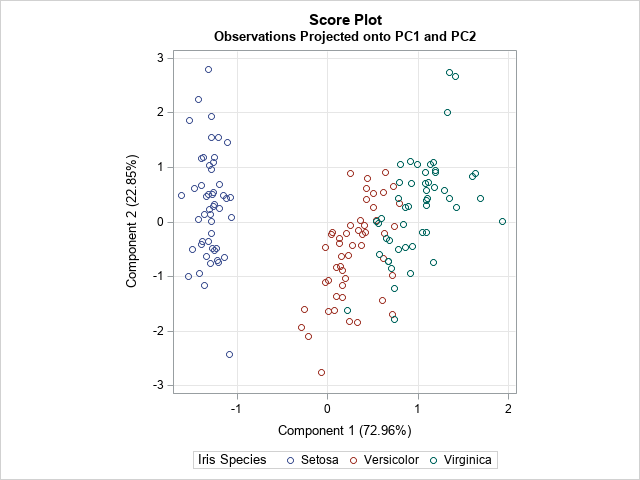 A loadings plot is a plot of two columns of the Eigenvectors table. PROC PRINCOMP does not create a loadings plot automatically, but there are two ways to create it. One way is to use the ODS OUTPUT to write the Eigenvectors table to a SAS data set. The previous call to PROC PRINCOMP created a data set named EV. The following call to PROC SGPLOT creates a score plot that projects the observations onto the first two PCs.

The second way to create a loadings plot is to use PROC FACTOR, as shown by the following statements. To documentation for PROC FACTOR compares the PROC FACTOR analysis to the PROC PRINCOMP analysis.

There is one more plot that is sometimes used. It is called a "biplot" and it combines the information in a score plot and a loadings plot. I discuss the biplot in a subsequent article.