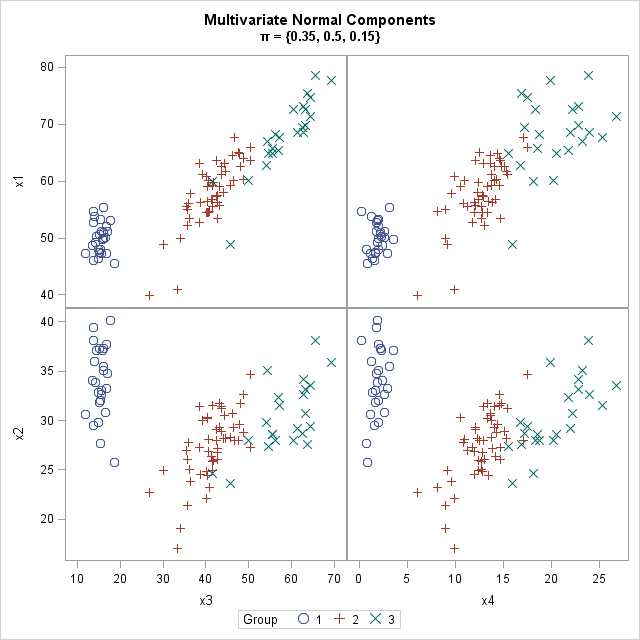 This article shows how to simulate data from a mixture of multivariate normal distributions, which is also called a Gaussian mixture. You can use this simulation to generate clustered data. The adjacent graph shows three clusters, each simulated from a four-dimensional normal distribution. Each cluster has its own within-cluster covariance, which controls the spread of the cluster and the amount overlap between clusters.

This article is based on an example in Simulating Data with SAS (Wicklin, 2013, p. 138). Previous articles have explained how to simulate from a multivariate normal distribution and how to generate a random sample from a univariate mixture distribution.

A review of mixture distributions

For a mixture of Gaussian components, you need to specify the mean vector and the covariance matrix for each component. For this example, the means and covariances are approximately the estimates from Fisher's famous iris data set, so the scatter plot matrix might look familiar to statisticians who have previously analyzed the iris data. The means of the three component distributions are μ1 = {50, 34, 15, 2}, μ2 = {59, 28, 43, 13}, and μ3 = {66, 30, 56, 20}. The covariance matrices for the component distributions are shown later.

Simulate a Gaussian mixture in SAS

The SAS/IML language is the easiest way to simulate multivariate data in SAS. To simulate from a mixture of K Gaussian distributions, do the following:

A technical issue is how to pass the mean vectors and covariance matrices into a module that simulates the data. If you are using SAS/IML 14.2 or beyond, you can use a list of lists (Wicklin, 2017, p. 12–14). For compatibility with older versions of SAS, the implementation in this article uses a different technique: each mean and covariance are stored as rows of a matrix. Because the covariance matrices are symmetric, Wicklin (2013) stores them in lower-triangular form. For simplicity, this article stores each 4 x 4 covariance matrix as a row in a 3 x 16 matrix.

The SimMVNMixture routine allocates a data matrix (X) that is large enough to hold the results. It generates a vector N ={N1, N2,..., NK} to determine the number of observations that will be drawn from each component and calls the RANDNORMAL function to simulate from each Gaussian component. The scalar values b and e keep track of the beginning and ending rows of each sample from each component.

The call to the SimMVNMixture routine returned the simulated random sample in X, which is a 100 x d matrix. The module also returns an ID vector that identifies the component from which each observation was drawn. You can visualize the random sample by writing the data to a SAS data set and using the SGSCATTER procedure to create a paneled scatter plot, as follows:

In summary, you can create a function module in the SAS/IML language to simulate data from a mixture of Gaussian components. The RandMutinomial function returns a random vector that determines the number of observations to draw from each component. The RandNormal function generates the observations. A technical detail involves how to pass the parameters to the module. This implementation packs the parameters into matrices, but other options, such as a list of lists, are possible.