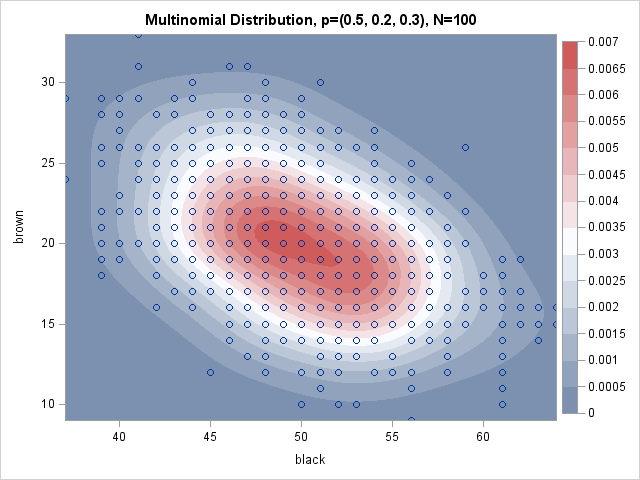 This article describes how to generate random samples from the multinomial distribution in SAS. The content is taken from Chapter 8 of my book Simulating Data with SAS.

The multinomial distribution is a discrete multivariate distribution. Suppose there are k different types of items in a box, such as a box of marbles with k different colors. Let pi be the probability of drawing an item of type i, where Σi pi = 1. If you draw N items with replacement, you will obtain N1 items of the first type, N2 items of the second type, and so forth, where Σi Ni = N. The k-tuple of counts (N1, N2, ..., Nk) is a single draw from the multinomial distribution.

For example, suppose you want to draw socks (with replacement) from a big box that contains socks of k = 3 different colors. After each draw, you record the color of the sock, replace it in the box, and mix the contents well so that the probabilities of drawing each color are unchanged. If you draw N = 100 socks, you might get 48 black socks, 21 brown socks, and 31 white socks. That triplet of values, (48, 21, 31), is a single observation for the multinomial distribution of three categories (the colors). Of course, repeating the experiment will, in general, result is a different triplet of counts. The distribution of those counts is the multinomial distribution. The scatter plot at the top of this article visualizes the distribution for the parameters p = (0.5, 0.2, 0.3) and for N = 100. Notice that only two counts are shown; the third count is 100 minus the sum of the first two counts.

where SampleSize is the requested number of observations to draw, NumTrials is the number of independent draws of the k categories, and Prob is a 1 x k vector of probabilities that sum to 1.

Each row shows the frequencies that result from drawing 100 socks (with replacement). Consequently, the sum of each row is 100. Although there is variation within each column, elements in the first column are usually close to the expected value of 50, elements in the second column are close to 20, and elements in the third column are close to 30. You can see this by computing the column means. You can also compute the correlation matrix, which shows that the variables are negatively correlated with each other. This makes sense: There are exactly 100 items in each draw, so if you draw more of one color, you will have fewer of the other colors. 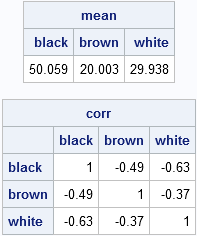 The density overlay shows that most of the density is near the population mean (50, 20). The scatter plot overlay shows the negative correlation in the simulated data, and also that some observations are far from the mean.

If you don't have SAS/IML software, you can still simulate multinomial data by using the "table distribution" in the data step. There is also a clever way to use PROC SURVEYSELECT to generate multinomial data. My next blog post presents those alternate computations.