If you do not have SAS/IML software, you can use the DATA step to simulate multinomial data in SAS. The most straightforward way is to simulate N draws from k categorical values and count the number of draws in each category. This is not as efficient as the algorithm that the RANDMULTINOMIAL function uses, but you can use this alternative method when N is small.

The following DATA step uses the "Table" distribution to generate categorical data according to specified probabilities and counts the number of each category: 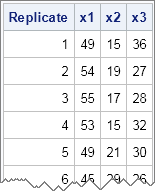 In the DATA step, the RAND function generates a random number in the range 1–k, where k = 3 for this example. An array keeps track of the count of each category. Each row of the resulting data set contains one observation from the multinomial distribution. Each row sums to &NumTrials, which is 100 for this example.

I've seen many variations on this DATA step technique over the years, but recently I saw a blog post by Simon Huang that uses the SURVEYSELECT procedure instead of the DATA step. The idea is to specify the vector of probabilities in a data set and then use PPS (probability proportional to size) sampling to sample with replacement. The SIZE statement specifies the variable in the data set that contains the sampling probabilities, as follows:

You can use PROC TRANSPOSE to convert the data set from long to wide form, as follows:

The resulting data set is identical to the data set that is created by the DATA step, provided that no category has zero counts. If a category for some trial has zero counts, the TRANSPOSE procedure will insert a missing value instead of a zero. (To see this, use %let NumTrials = 100;) If your application requires a zero instead of a missing value, use a subsequent DATA step (not shown) to convert the missing values to zeros, or just use the DATA step program at the beginning of this article.