Sometimes a population of individuals is modeled as a combination of subpopulations. For example, if you want to model the heights of individuals, you might first model the heights of males and females separately. The height of the population can then be modeled as a combination of the male and female densities. If the subpopulations are not equally distributed, then the relative proportion of males and females in the population is used to determine the mixture density.

If you want to simulate this call center, the model suggests that you sample according to the following scheme:

Sampling from a mixture distribution in the DATA step

In the SAS DATA step, the following program statements us the RAND function to sample 250 calls from the call center model:

You can use the UNIVARIATE procedure to visualize the resulting sample and to estimate the population density: 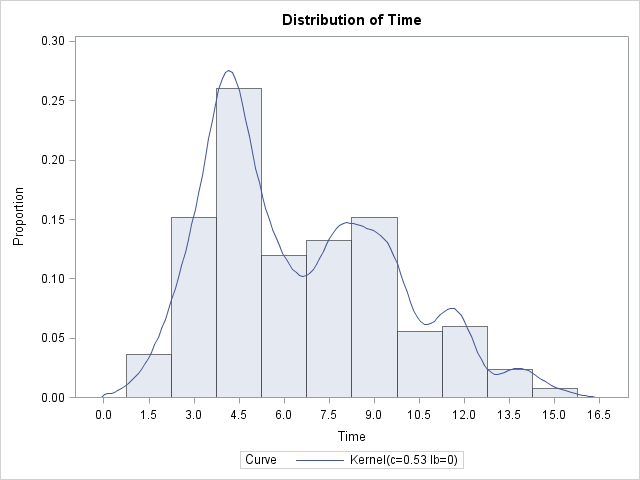 In the histogram and in the kernel density estimate, you can clearly see the high density near three minutes and near 8 minutes, which correspond to the "easy" and "specialized" calls, respectively. The density of the "hard" calls is merged with the more numerous "specialized" calls, but the "hard" calls are visible as a small bump in the density estimate.

Because a normal distribution is used to model each type of call, you can simplify the previous program by eliminating the compound IF-THEN/ELSE statements. If you put the means and standard deviations in temporary arrays, you can use the statement Time = rand("Normal", mean[type], std[type]);

Sampling from a mixture distribution in the SAS/IML Language

The following SAS/IML program samples from the same mixture distribution:

Notice the following features of the program:

The distribution of the simulated times is similar to the distribution shown in the previous histogram. Simulations like these can be used to ensure that adequate resources are in place to handle the expected number of calls for the various categories.