Most SAS regression procedures support a CLASS statement which internally generates dummy variables for categorical variables. I have previously described what dummy variables are and how are they used. I have also written about how to create design matrices that contain dummy variables in SAS, and in particular how to use different parameterizations: GLM, reference, effect, and so forth.

It occurs to me that you can visualize the structure of a design matrix by using the same technique (heat maps) that I used to visualize missing value structures. In a design matrix, each categorical variable is replaced by several dummy variables. However, there are multiple parameterizations or encodings that result in different design matrices.

Heat maps require several pixels for each row and column of the design matrix, so they are limited to small or moderate sized data. The following SAS DATA step extracts the first 150 observations from the Sashelp.Heart data set and renames some variables. It also adds a fake response variable because the regression procedures that generate design matrices (GLMMOD, LOGISTIC, GLMSELECT, TRANSREG, and GLIMMIX) require a response variable even though the goal is to create a design matrix for the explanatory variables. In the following statements, the OUTDESIGN option of the GLMSELECT procedure generates the design matrix. The matrix is then read into PROC IML where the HEATMAPDISC subroutine creates a discrete heat map. 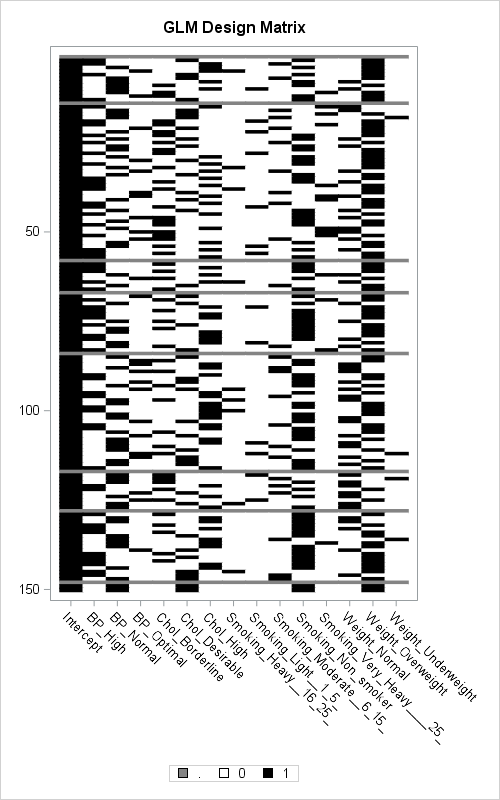 There is a binary design matrix that contains only the independent columns of the GLM design matrix. It is called a reference parameterization and you can generate it by using PARAM=REF in the CLASS statement, as follows: 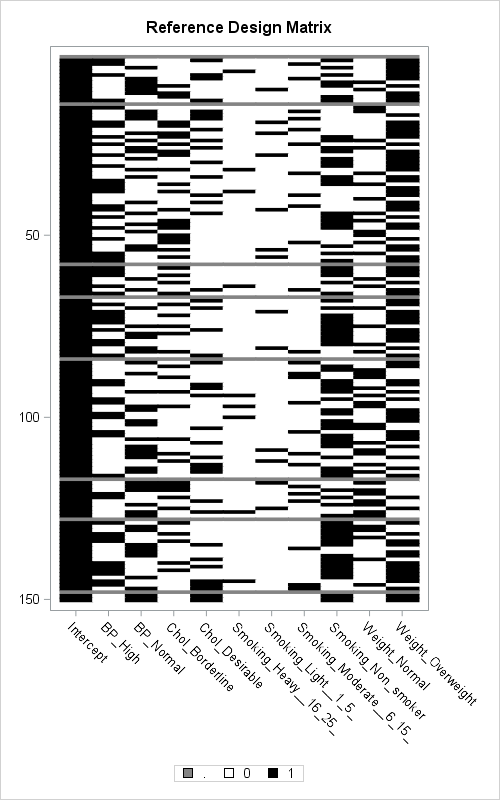 Again, you can use the HEATMAPDISC call in PROC IML to create the heat map. The matrix is similar, but categorical variables that have k levels are replaced by k–1 dummy variables. Because the reference level was not specified in the CLASS statement, the last level of each category is used as the reference level. Thus the REFERENCE design matrix is similar to the GLM design, but that the last column for each categorical variable has been dropped. For example, there are columns for BP_High and BP_Normal, but no column for BP_Optimal.

If you do not specify the reference levels, the last level for each categorical variable is used, just as for the REFERENCE parameterization. The following statements generate an EFFECT design matrix and use the REF= suboption to specify the reference level. Again, you can use the HEATMAPDISC subroutine to display a heat map for the design. For this visualization, light blue is used to indicate -1, white for 0, and black for 1. 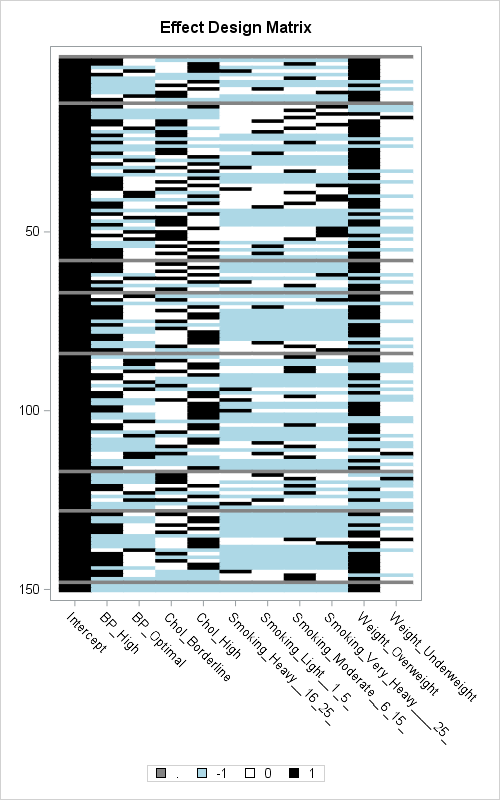 Heat maps in Base SAS

In the example, I have used the HEATMAPDISC subroutine in SAS/IML to visualize the design matrices. But you can also create heat maps in Base SAS.

If you have SAS 9.4m3, you can use the HEATMAPPARM statement in PROC SGPLOT to create these heat maps. First you have to convert the data from wide form to long form, which you can do by using the following DATA step:

The heat map is similar to the one in the previous section, except that the columns are labeled 1, 2, 3, and so forth. If you want the columns to contain the variable names, use the VALUESDISPLAY= option, as shown in the comments.

If you are running an earlier version of SAS, you will need to use the Graph Template Language (GTL) to create a template for the discrete heat maps.